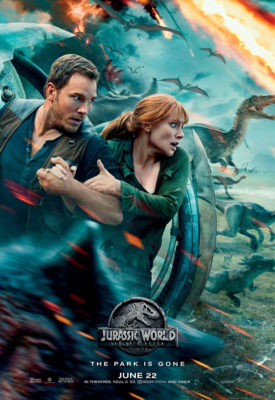 It’s been three years after the destruction of the Jurassic World theme park. Now, Owen Grady (Chris Pratt) and Claire Dearing (Bryce Dallas Howard) return to Isla Nublar to save the remaining dinosaurs from a growing volcanic threat. Soon, they encounter horrifying new breeds of the gigantic prehistoric reptiles, while uncovering a conspiracy that threatens the planet.

I was amused at the clever, comic, references to the theme-park experience. But the intentionally lame introductory video featuring a bumbling Jimmy Fallon did nothing for me. Let’s face it; the real draw of the Jurassic franchise is the ultra-realistic dino action. Here their verisimilitude is the best yet. Their movement, heft, musculature and ferocity are what we expect and want. I suspended all disbelief when I saw the armor-plated ankylosaurs and whale-sized mosasaur, to say nothing of the wide variety of flying pterosaurs! J A Bayona, (A Monster Calls), has a great feel for big action set-pieces and he never lets the film and story slow down less the audience consider the deficiencies of character and plot points like the decision to release a pack of lethal but badly trained velociraptors in the hopes that they’ll hunt down the Indominus.

Though the latest Jurassic iteration is arguably the best since the first film, I did not feel the same awe and wonder of seeing huge dinos come alive on the big screen. 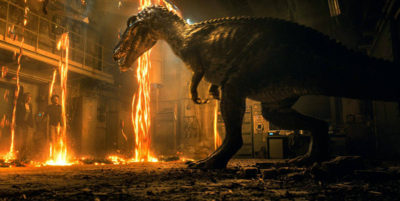 I was surprised and disappointed when Owen and Claire stop to grieve over a pack of dying herbivores when they’re supposed to be rushing to save her nephews from a grisly, imminent death. That scene took me out of the movie and my disbelief was no longer suspended. But the over-all effects, production design and action are more than satisfying.

There’s a moment that defines the movie when a point is reached when it seems all hope is lost. That’s when the younger of the two nephews astutely exclaims that in order to defeat the Indominus “we need more teeth.” That’s what this movie is all about: a bigger bite with more teeth! It’s not about three dimensional human characters or metaphorical lucidity.

I loved the first half of the movie taking place outside but was a little disappointed when it moved to interior locations for the last half.

Where the movie excels is the stunning CGI dinos that impress, threaten and chomp more and louder than before.

Bayona understands the over-arching theme of Jurassic World (evolution and mankind as protector or destroyer of nature) and delivers it in spades. Now playing everywhere in the CV. 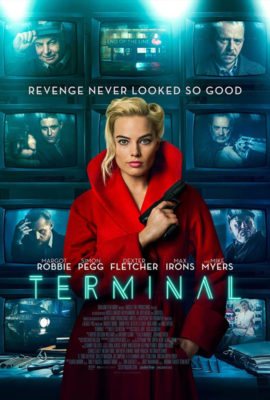 Vaughn Stein’s violent, convoluted and unnecessarily complex and confusing crime thriller is set in the dark heart of a sprawling and anonymous city in which two assassins carry out a sinister mission.

Add to that a teacher battling a fatal illness, an enigmatic janitor and a curious waitress leading a dangerous double life. Murderous consequences unravel in the dead of night as their lives intertwine at the hands of a mysterious criminal mastermind who is apparently hell-bent on revenge.

Filmed in Budapest, Hungary, TERMINAL is the directorial debut of Vaughn Stein, who also wrote the screenplay, such as it is. Margot Robbie was one of the producers, and I’m guessing her presence on screen is one of the reasons the film got made. Robbie has an undeniable presence as she’s proved in her recent movie roles. When she’s on screen, it’s hard to look at anything or anyone else. Her co- stars include Simon Pegg, Max Irons (Jeremy’s son) and Mike Meyers (!). This is not a comedy.

There’s a pretentious staginess from beginning to end that becomes a source of irritation that only grows more so as the minutes drag by.

All style and no substance, this failed attempt at a modern film noir is done-in by the garish emphasis on a neon palette that only serves to emphasize the emptiness of the story that has no over-riding metaphor despite the repeated references to “Alice in Wonderland.” Minimal extras.  RLJE FILMS.  Blu-ray.