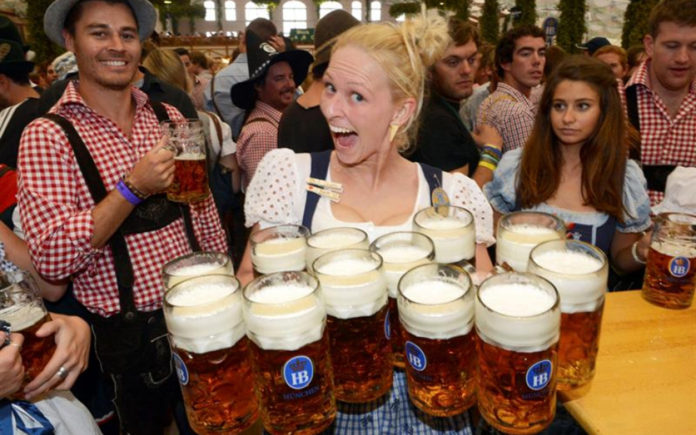 If Instagram had been around in the early 1800’s, French Courtesan Therese Charlotte Luise would have been a ‘gram darling. She’d no doubt be posting classy, elegant pictures of herself in the #OOTD, with the obligatory motivational caption that never has anything to do with the photo itself. Therese was known and loved by the people of her city; she was so popular that even Napoleon Bonaparte was interested in wedding her. It was prince Ludwig of Bavaria that she eventually took as her husband, and they were married in a massively opulent and lavish ceremony on October 12, 1810.

40,000 guests arrived, a spectacular 30 horse race was held, tons of beer was consumed, lots of music was played, and everyone partied like it was 1999. After it was over, peeps decided that the royal wedding party was so epic that it needed to be done again, like yearly, and the marriage of Prince Ludwig and Princess Therese became recognized as the first ever Oktoberfest celebration.

You probably didn’t know any of that until now because as an American, Oktoberfest just represents wearing lederhosen and getting shit faced. As far as American culture is concerned, St Patrick’s Day, Cinco De Mayo, and Oktoberfest are all reasons to culturally appropriate some costumes and get drunk as a skunk (fighting, falling, and/or emotional crying optional). Drinking holidays massively popular in the states, but why do those holidays all originate from other countries?

I’ll tell you why. The damn pilgrims. 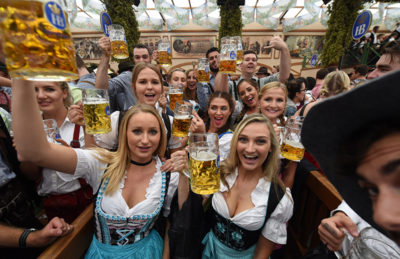 16th century English Reformed Protestants were sick of the church of England’s shit; they were ready to (figuratively) jump ship and move their grim, humorless, sex-and-alcohol-hating asses to the colonies of America. So, pilgrim they did, and the Protestants thrived and prospered in the America’s, espousing traditionally conservative values, and eventually becoming the famed WASP’s of the 20th century. While colonial settlers were of Angelo-Saxon origin, it wasn’t long before other nations began trekking across the seas as well to escape political unrest, strife, famine, and war.

The collapse of the Industrial Revolution in Germany was a watershed moment that caused many citizens to flee to the Americas between 1830-1860. Here in the new countries, these new immigrants found religious and political refuge, freedom from having to join the German army, and the chance to own land. Those who settled in the United States found the Midwest to be much easier to thrive in than the bustling east coast, and soon founded cities like Frankenmuth, Michigan (affectionately known as Little Bavaria). While the neighborhoods and small townships founded by immigrants undoubtedly all celebrated their traditional holidays, it wasn’t until the counter-culture movement of the 1960’s that America began to shrug-off the remaining vestiges of protestant conservatism. The children of immigrants embraced their own cultural roots as well as the cultures of others, and it was in this decade that the celebration of Oktoberfest became widespread and practiced nationally by those looking to cheer on culture and tradition. The fact that beer flowed so freely at Oktoberfest wasn’t lost on the youth, and many college aged Americans were more than happy to don Lederhosen and Dirndl if it meant laughing and dancing with a Mass (liter) of lager in hand.

The appeal of German based partying grew in popularity throughout the 70’s, 80’s, and 90’s, and by the early 200’s, you didn’t have to travel far to get a yearly fix of beer, polka and pretzels. I was 23 years old when friends and I traveled to Torrance for the Alpine Village Oktoberfest held there annually. At the time, Big Bear lake and Alpine Village were the only two known Oktoberfests in Southern California, but oh, how times have changed. San Diego, Orange County, and Lake Arrowhead now host official Oktoberfest celebrations, but Redlands Oktoberfest is where I’ll be this year. Besides authentic German lagers, many craft breweries will also be on hand with their Americanized takes on traditional fest bier. Stein holding contests, yodeling contests, full-brass polka bands, and the expected variety of German-inspired food should all be on hand. The event takes place Saturday, October 6th, so dry clean your lederhosen and get ready to celebrate the 208th anniversary of Therese and Ludwig’s wedding.