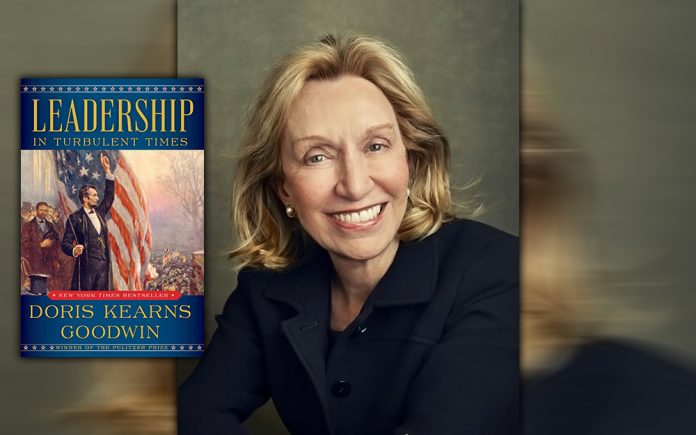 With the surging global pandemic, the United States is experiencing both a health and economic crisis.  As we adjust to this new reality and do our best to be good citizens and neighbors, we patiently wait to see what will happen next.  Sadly, there has been little guidance, inspiration or a singular voice to comfort or alleviate our concerns and fears.  Pulitzer Prize winner Doris Kearns Goodwin’s book Leadership in Turbulent Times (Simon & Schuster, 475 pages) reveals what it takes to step up and lead a nation during its most challenging times.

Goodwin has written about these men before and draws on her extensive research to determine if leaders are born or made, and whether leaders make the times or do the times make the leader?

Dividing the book into three parts, Goodwin provides a succinct but brief biography of each President and his rise to power.  In Part One, “Ambition and the Recognition of Leadership,” Goodwin includes each man’s upbringing, parental influences and personal drive.

In part two, “Adversity and Growth,” the author exposes the highs and lows each man experienced, ultimately bringing about personal enlightenment and a willingness to change.

Finally, Part Three, “The Leader and the Times: How They Led,” Goodwin identifies the moment in history where all the men rose to make a significant difference in the lives of Americans and future of the country.

Goodwin does a beautiful job profiling these Presidents and their understanding of leadership.  In spite of all that we think we know about Lincoln, Teddy, FDR and LBJ, she brings a refreshing perspective on the history and their psychological make-up.

There are many surprises and fascinating details about these great men and their roles as leaders.  All four experienced devastating loss and extreme depression.  When they each emerged from the darkness, they were better men — humbled, enlightened and inspired to make a difference.

One common denominator of all four men is their sense of empathy.  All were able to connect with the people and understand the personal challenges the citizens faced living in a country under difficult circumstances.  Because of their own private sorrow, these presidents were able to relate to Americans on a much deeper level.

Lincoln practiced “Transformational Leadership” – inspiring followers to identify with something larger than themselves — as he detailed and championed the Emancipation Proclamation.   At the time, many believed in “Transactional Leadership” – appealing to the self-interest of followers, using quid pro quos, bargains and rewards to solicit support and influence behavior.

Goodwin outlines how Theodore Roosevelt took office during a coal strike that threatened to stop coal production by winter.  His “Crisis Management” skills not only averted a devastating strike, but also brought about significant change in the relationship between capitalists and laborers.

FDR’s skills are highlighted by Goodwin as “Turnaround Leadership.”  In one hundred days, he was able to get the country back to work and improve America through programs that benefited people directly and the country as a whole.

Johnson is seen by Goodwin as having “Visionary Leadership” skills.  She outlines how LBJ went about getting the Voting Rights Act passed in only 623 days after Kennedy’s assassination.  Goodwin believes that the 89th congress (under Johnson’s administration) and its passing of the Civil Rights Act “engineered the greatest advances in civil rights since the Civil War and launched a progressive vision of American society” that continues today.

Goodwin knew LBJ personally and worked for him in the White House.  She served as one of his biographers after he left office.  She writes that Johnson recognized his lack of leadership regarding the Vietnam War would forever overshadow the hard work and achievements he made leading the 89th congress.

This is a terrific book and great read.  I found it not only timely, but also encouraging.  We must find our own leadership gifts and utilize our best qualities to help make these turbulent times less toxic and anxiety producing for our family, neighbors and our selves.

As Americans struggle to survive what is a history making pandemic and global financial crisis, it is clear this nation’s leader is deficient.  President Trump has yet to bring people together and encourage us to be better and stronger as a nation.  Trump lacks credibility, eloquence, and the ability for empathy, compassion or inspiration.  That’s all on him.

“When the American people feel they are doing all right for themselves they do not give much thought to the character of the man in the White House; they are satisfied to have a President who merely fits the picture frame…However, when adversity sets in and the problems become too big for individual solutions, people start looking anxiously for guidance calling for a leader to step out of the picture fame and assert himself as a vital, human need.”

Goodwin remarks: “The leader must be ready and able to meet the challenges presented by the times.”

Dear reader, please know that this too shall pass.  In the meanwhile, may we rise above the fear with strength, health and good cheer to get through this unprecedented and challenging time.

Peace be with you and your loved ones.