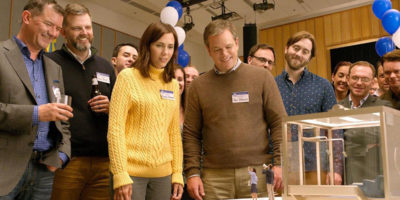 Alexander Payne steps out of his comfort zone, instead of a comically infused intimate human drama in the real world with which we are familiar, he gives us a surreal eye-catching sci-fi fable about a future society in which people can miniaturize themselves so they can improve their lives materially.

He film opens with “Norwegian doctor” Rolf Lassgard, a announcing an incredible medical breakthrough that allows humans to be miniaturized to mere inches; it’s a big plus in the fight against the world’s dangerous population explosion. The opportunity to get small sweeps the world and many people sign on.  And it’s all voluntary, not government enforced.  So far so good, but unfortunately, this creates a separate group of humans versus “the rest of us.”

A decade after the announcement, we meet middle aged childless couple Paul (Matt Damon) and Audrey who decides to undergo the procedure hoping to reduce or eliminate the stress in their lives 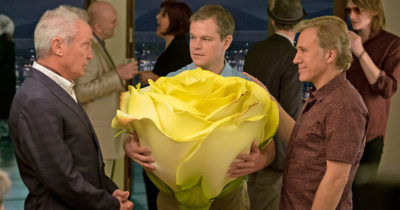 Payne’s movies are mostly character driven and this one is no different.  Perfectly cast Matt Damon, Kristen Wiig, Christoph, Waltz, Udo Kier and Hong Chau share billing.  It’s fun to see the fine cast shrunk down to a height of five inches but find themselves in circumstances in which they must engage with normal sized humans. The special effects are as convincing as the emotional elements of this very odd, but all-too human drama.

Everything changes when Kristen Wiig, playing Damon’s wife Audrey, goes back on her promise to downsize herself along with her mate Paul so they can move to a new, smaller, “downsized” community that would hopefully remove or at least reduce the stresses in their lives.  Her refusal triggers life-altering events rife with unexpected emotions and dangers, setting the couple on a new path and adventures.

It would be unfair to describe much more of this fun film that’s filled with surprising twists and turns that will not be anticipated. The plot gets a shot of adrenalin when Paul hooks up with two aging, cigar-smoking European playboys (Christoph Waltz and the Valley’s Udo Kier) show up and we understand that not only Paul’s fate but also that of the world itself hangs in the balance!

Damon and Wiig are great together.  They have a natural chemistry that makes real the unexpected emotional situations their characters must navigate.  One can only hope they continue working together.

The clever production design and superb visual effects are a nice fit.  Rolfe Kent composed the fanciful score that reinforces and reminds of the film’s fundamental comedic tone.   The admittedly crazy premise is as liberating as the twisty storyline. 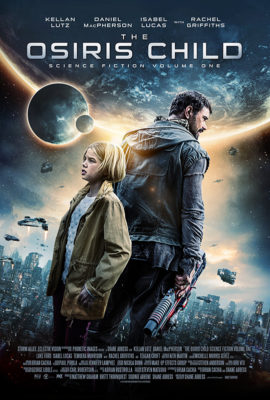 When a dangerous outbreak threatens to destroy everyone living on a newly colonized planet, Lt. Kane Somerville (Dan MacPherson) goes against orders and leaves his station to rescue his young daughter (Teagan Croft).  Desperate to get to her before it’s too late, Kane enlists the help of an escaped prisoner (Kellen Lutz) as they battle their way through the chaos of a world on the verge of annihilation.  With the odds stacked against them, saving his young daughter may turn out to be humanity’s last chance of survival as well.

The conceit of a group of strangers teaming up and working together for the greater good is a welcome and refreshing element of this often too predictable story.

Director Shane Abbess delivers an acceptable and nice looking genre film considering it’s low budget, Aussi B-movie pedigree.  Some cool sci-fi action but the heavy-handed screenplay is a tough hurdle to overcome in this oddly titled chapter of what appears to be the opening salvo of a franchise from Down Under.  RLJ Entertainment.  Blu-ray.