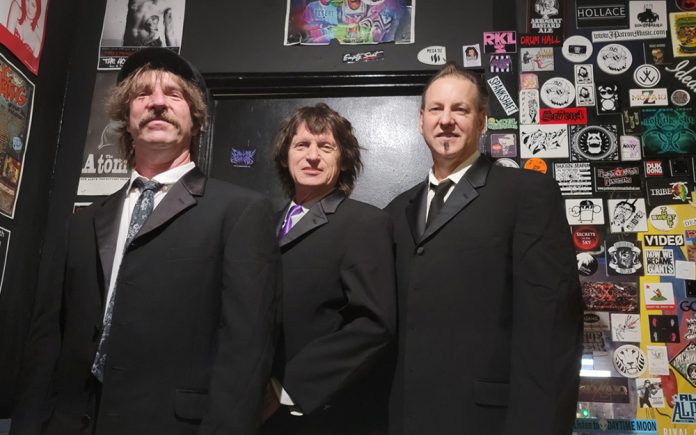 Music as always captivated us, enriching our spirits and our minds. Without it, our lives would have never experienced the joy of a fond memory, or a connection to a popular artist at a live performance. Importantly, music allows us the freedom to express our individuality. One decade, in particular, as impacted its youth in such a way, that the music was used as a form of weaponry against racism, corporations, sexism, and politics while music venues were set as a battlefield. The 1960’s was a beautiful time for music to be experimented and to be created in a way that will cultivate future musicians. One local band has recreated this era through using authentic 60’s vibes from The Yardbyrds to the rockin’ garage-punk sounds by The Kinks. SaintSteelWood breaths life back into the 60’s era with a nostalgic British Invasion kick. 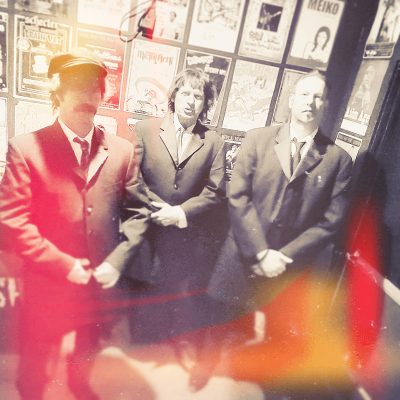 SaintSteelWood is one of Coachella Valley’s newest cover band. In fact, they are definitely not the run-of-the-mill type of cover band, in fact, their sound is so unique, they are sought after from all ages, forming an underground following of psychedelic rock and Brit-Invasion music enthusiasts alike in the Coachella Valley. Although, they have only performed a few shows before 2019 Covid-19 lockdown, they have still managed to win over their intrigued audiences anywhere they play, while venues requesting them to return for future shows. This was because the founding talented fathers, St. James (Drums), Jerry Steelfox (Guitar) and Woody Retro (Bass), has reflected their passion for the Mod Brit-Invasion era, with authentic 60’s music equipment, giving birth to SaintSteelWood. St. James is one of the most sought-after local drummers in the Inland Empire, who lives for this groovy genre:

St. James: “When we started out on this journey we hit up a few jam sessions at Pappy’s and Palm Canyon Roadhouse and our response was so overwhelmingly positive we decided to give it a go. Jerry, Woody and I love the music from this era so it’s a no brainer. When you have a Silvertone guitar plugged in to a Vox amp add some vintage Rogers drums and a “fendo” bass. You get that authentic 60’s sound whether we’re doing Yardbyrds, Dylan or Lovin’ Spoonful you’re going to get that vibe from us. I see a lot of people going acoustic and I find that a disturbing trend. You have to ask yourself. Did you become a musician to do watered down versions of an artist’s song? Rock and Roll is loud and in-your-face and that’s what you get from SaintSteelWood.”

Woody Retro is the main founder of SaintSteelWood, who happen to have noticed a need for the beloved 60’s vibe the Coachella Valley’s diverse music scene: 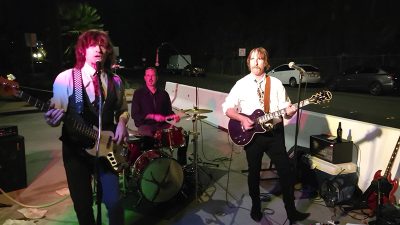 Woody Retro: “We became acquainted with one another while playing in various substitute positions in other bands, decided to form their own band over a passion for covering British Invasion, Surf Music, Folk Rock & many other genres authentically from the 1960’s. At first, we were an acoustic duo with Jerry Steelfox and myself, singing 2-part harmony & complimenting that with acoustic guitars. When I got a call to perform at a Country Club in Palm Desert 2 years ago, I decided to bring in drummer James to bring up the dance feel. I was quite pleased with the resulting combination. We performed a few open mics shows at Pappy & Harriet’s in Yucca Valley & Palm Canyon Roadhouse in Palm Springs. Word got around about our exciting new act with a vintage sound.”

The mod trio also mixes in danceable classics from the 60’s with popular songs from The Turtles, Dylan, and Jay and the Americans, a favorite of Desert Fox Bar owner, Mark Green:

Mark Green: “SaintSteelWood is a tight, thrilling trio that never stops delivering and is a total crowd pleaser. We are always excited to have them come out to play.”