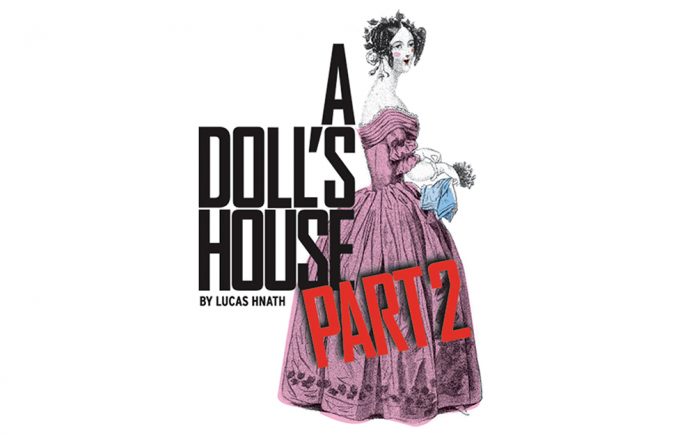 By Dee Jae Cox / Photos By David A. Lee

When Playwright Henrik Ibsen wrote his classic drama, “A Doll’s House” in 1879 he adamantly denied that it was his intent to write a Feminist play.  In fact he outlines his perception of the play as a ‘Modern Tragedy.’  It was the story of a married woman, Nora, who leaves her husband and children to strike out on her own.  A radical notion during a time when the rights of women were fairly nonexistent.  Ibsen wrote, “A woman cannot be herself in modern society,” he argues, since it is “an exclusively male society, with laws made by men and with prosecutors and judges who assess feminine conduct from a masculine standpoint!” When Nora exits through the door to pursue her own independence, at the end of “A Doll’s House”, it is as stunning a move as any that could be perceived in 1879. 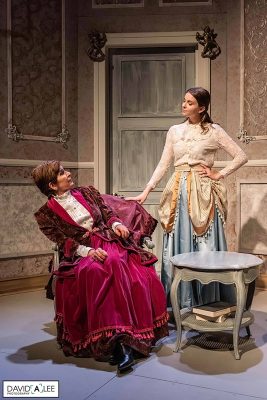 One hundred and thirty-eight years after the creation of the original “A Doll’s House”, Playwright Lucas Hnath reveals in wonderful detail, the life Nora ended up creating for herself after leaving her husband and children, in his Tony Award winning sequel, “A Doll’s House 2.”

With the presentation of Hnath’s creative and revealing drama, A Doll House 2, which picks up fifteen years after Nora’s departure from her family in the original story,

Coyote Stage Works, kicked off their eleventh season in their new home at the Palm Springs Cultural Arts Center.

Beginning with a knock on the same door that she had exited fifteen years earlier, Nora (Robin Mcalpine,) enters the stage with confidence and a presence that leaves little doubt that she is a woman of independent means.  She is well dressed and carries an air of success.  Nora is greeted by her former nanny, Ann Marie (Barbara Gruen) and the witty repartee between the two is like firecrackers going off.  Both women are absolutely mesmerizing to watch as they trade witty exchanges and we learn what has transpired in the last decade and a half in the life of Nora and the serious dilemma that has forced her return.

Soon Torvald, (Don Amendolia,) the abandoned husband, unexpectedly arrives home early from his job at the bank  and once more the wit and talent of Hnath’s diaglogue is showcased in wonderful splendor as we begin to gain insight to each character’s perspective on their marital roles and the mistakes they made.  The successes and failures that plague most marriages are exacerbated ten-fold by the restrictions and expectations of the times.

Eventually Emmy, (Lizzie Schmelling,) Nora’s now adult daughter, is brought in to help resolve the critical problem that is weighing on the family. Schmelling is a true pleasure to watch as she embodies the emotionally controlled daughter facing the mother who abandoned her.   The emotional exchanges between Nora and Emmy showcases the fractured mother/daughter relationship in all of it’s conflicting glory.  Each holding very different views on the roles of women and what they want in their lives.

I was absolutely mesmerized throughout this entire show.  There was no intermission and I didn’t even notice.  All four members of this cast are stellar.  Mcalpine as Nora, beautifully excelled at carring the weight of the lead actor who never gets to leave the stage. Amendolia, Guren and Schmelling each brought captivating performances to their individual roles.

Chuck Yates, masterfully directs this single scene production. Each movement across the stage enhances the dialogue and perfectly portrays the character’s emotional expressions. 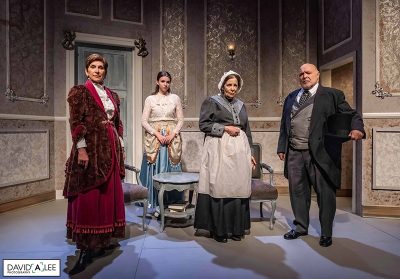 Thomas L. Valach’s set design was simple, yet elegant.  And Frank Cazares’ costumes were stunning. I especially enjoyed Jason Smith’s lighting design and the overhead displaying of names as each character came into the story.   The only distraction I found was the introduction of contemporary music into this show.  Aretha Franklin songs felt a bit out of sorts for the time period of this play.

Coyote Stagework’s production of “The Doll House 2” is a wonderful example of the true magic of theatre.  The blending of a very well written script, talented actors, skilled direction and overall exceptional production values all coming together in perfect sync.

For tickets and Information visit; https://www.coyotestageworks.org/