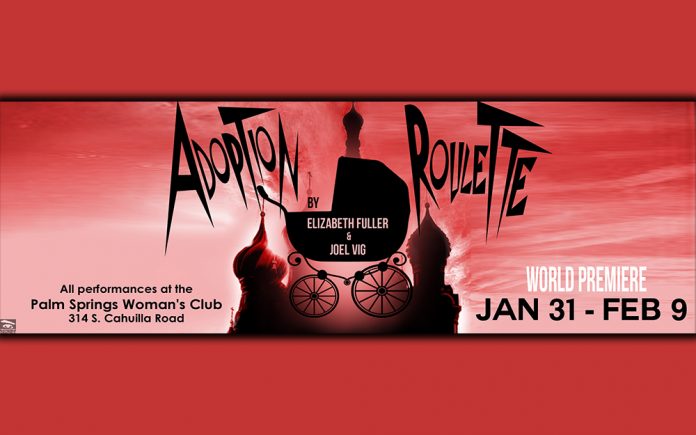 Predation is the act of preying on someone.  The noun predation is most commonly used to talk about groups like pirates or marauders who prey on innocent people. In fact, the Latin root word praedationem means a plundering or taking of goods. It is no surprise that the Russian adoption system would practice the art of preying on innocent Americans in an effort to place their most troubled children.  ….. And so this story begins. 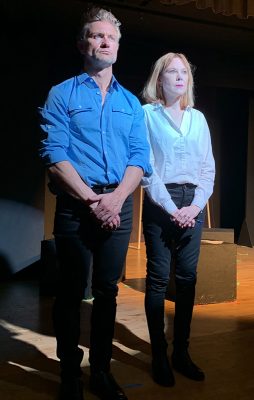 Desert Ensemble Theatre opened their World Premier of Elizabeth Fuller and Joel Vig’s true story, “Adoption Roulette,” to a full house.  Additional chairs were added for the overflow as the lights dimmed.  Sans set, props, costumes or elaborate lights and sound, the bare bones stage looked stark and barren.  Though the actors were off book, the minimalist approach of this production caught me off guard and I initially thought of it more as a staged reading. The elaborate narration and exposition in the script contributed to that feeling.

As I become more engrossed in this personal adoption saga, I began to understand the intent of the dark absence of anything other than actors on the stage.  Perhaps a depiction of the void that the characters seemed trapped in.

Adoption Roulette, tells the story of Elizabeth Fuller, (portrayed by Yo Younger,) an American who pursued the adoption of a Russian child and the personal struggles and ongoing conflicts she experiences while going through this arduous process.  Younger is without doubt one of the most talented performers in the desert and through her presentation of Elizabeth, I came to understand that Adoption Roulette is really a one woman show and Younger the perfect actor to pull it off. It is Elizabeth’s tragic story and through her first-person narrative, she reveals the horrors of her efforts and how she and her husband were taken advantage of during this vulnerable time. From receiving the first image of the little girl who was to be their daughter, through the last horrific steps of the painful process, Elizabeth takes us through this very personal and painful journey.

It’s not easy to perform any role with zero props or set.  It’s takes serious talent and this cast has it in spades. In addition to Elizabeth, there are a multitude of other characters all performed exceptionally well by Adina Lawson and Fergus Loughnane. Lawson and Loughnane seamlessly slipped between their characters without any ripples in the story’s continuity. 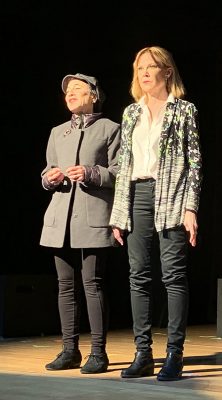 When brilliant actors (and personal favorites like Yo Younger and Adina Lawson) are on the same stage in the same production, it’s no surprise that they can carry a show without any other stage accoutrements being necessary.   Bravo to Younger, Lawson and Loughnane who masterfully accomplished this task.

I would like to have heard more sounds or special effects when Elizabeth interacts with her newly adopted daughter. The relationship is obviously challenging, yet I felt the child’s absence and was a bit unsatisfied with the choice to portray the mother/daughter relationship completely through mime.  I wanted to be shown as much as told about this personal interaction and its conflicts. The raw emotion portrayed by Elizabeth certainly relayed the full impact of this child’s overwhelming needs on the mother, but the potential impact on the audience was missing without being somehow shown the child’s actions as well.

Shawn Abramowitz directed this piece and seemed to have brought out the best in this wonderful cast.  Fuller and Vig’s script is intimate and personal and well worth watching.

For tickets and Information visit;  http://www.detctheatre.org/