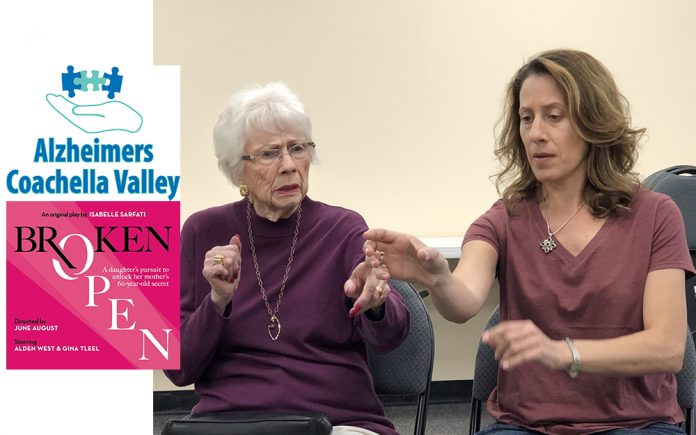 According to the National Alzheimer’s Association, an estimated 5.8 million Americans of all ages were living with Alzheimer’s dementia in 2019 and every 65 seconds, someone in the United States develops this disease.  It’s not just about memory loss, it’s the sixth leading cause of death in the country.  The medical costs are in the billions.  The emotional cost to individuals and their families is immeasurable.

First time playwright, Isabelle Sarfati used her personal experience of having a mother with Alzheimer’s to write her new play, “Broken Open,” which premiered on March 6th, as a feature in the Alzheimer’s Coachella Valley Fundraising Gala on stage, at the University of California Riverside in Palm Desert.  The show was directed by award winning theatre veteran June August. August has been active in theater as a writer, director, actor and composer for more than 50 years and has appeared in over 20 productions in the Coachella Valley.

The Play showcased actresses Alden West, (as Mami,) who has previously been awarded six Desert Theatre League acting awards,  as well as the DTL Lifetime achievement Award,  and Gina Tleel, (as Bella,) a graduate of the University of Southern California, who produces and hosts several signature events and festivals and has performed at various venues, including The Comedy Store in Hollywood and the Ice House in Pasadena.

Broken open, is the story of Bella, who has spent her entire life uncertain about who her biological father was.  After Mami’s Alzheimer’s diagnosis, the need to learn the truth becomes more urgent before the memory loss erases the knowledge forever. The painful conflict between mother and daughter finally reveals a long-buried secret that seems to bring some element of closure for them both.

Sarfati, describes her work as “a poignant story, filled with the turbulence and pain wrought from someone you love, having to hide and carry a shameful secret for almost 60 years. And yet it is also a story of love, hope and sacrifice. We cannot lose sight of the fact that people with Alzheimer’s still have something unique defining them.”

Alzheimer’s is a degenerative brain disease that is caused by complex brain changes following cell damage. It leads to dementia symptoms that gradually worsen over time. The most common early symptom of Alzheimer’s is trouble remembering new information, because the disease typically impacts the part of the brain associated with learning.

If you are in need of support or looking for more information on Alzheimer’s, please contact The Alzheimer’s Association Coachella Valley located at 74020 Alessandro Dr. Suite A, Palm Desert, Ca and can be contacted at 760-996-0006.  Alzheimers Coachella Valley provides free educational programs, support services and care consultations.