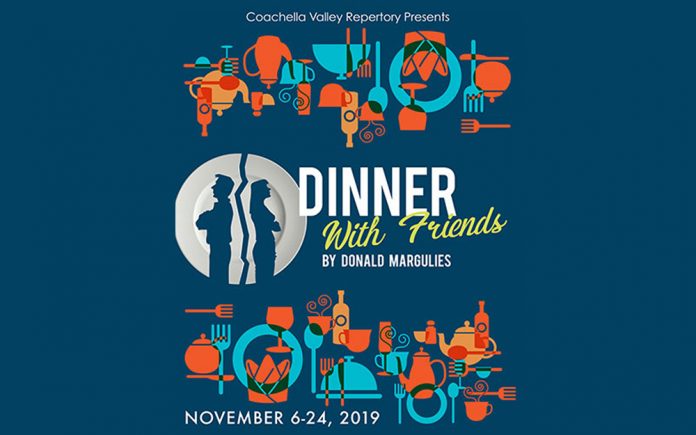 Dinner With Friends, Donald Margulies’, Pulitzer Prize winning drama sets the table for what could be an in depth and interesting character study.  Currently in production at the Coachella Valley Repertoire, this play, written in 1998, tells the story of Gabe and Karen, (Jennifer Sorenson and Scott Golden,) a happily married, middle-aged couple, who are professional chefs and food connoisseurs. They are best friends with Tom and Beth, (Christopher Wallinger and Corryn Cummins,) another married couple, whom they had first introduced to each other years twelve earlier. While having dinner at Gabe and Karen’s home, Beth tearfully reveals that she is getting a divorce from Tom, who has been unfaithful.   When Tom learns that Beth has already shared the news with their friends, he rushes over later that night to tell his version of events.  Time passes and we see the results of their split on both Tom and Beth, as well as their friends, Gabe and Karen who are forced to introspectively evaluate their own relationship along the way. 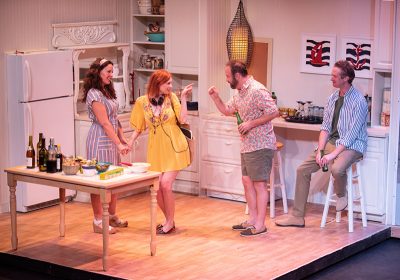 Unfortunately, rather than witnessing the anticipated growth and arc of these characters, we are left with the painfully dull melodrama of deflated balloons and streamers that remain discarded on the floor when the party is over.   None of the characters are exceptionally likable, but Gabe’s self-centered rationalization for leaving his wife for another woman is downright nauseating.  Being forced to watch the petty arguing between Beth and Tom is uncomfortable and painful.

I had read this script in a playwriting class years ago and was not initially impressed with it. But as most will say, a play should be seen, not just read. So it was with this belief that I held off with any judgement.  Given CV Rep’s reputation as a stellar producer of professional theatre, I thought that if anyone could present this dreary drama in a positive light, it would be them.  Unfortunately, even CV Rep could not find the magic in this slow-moving script. 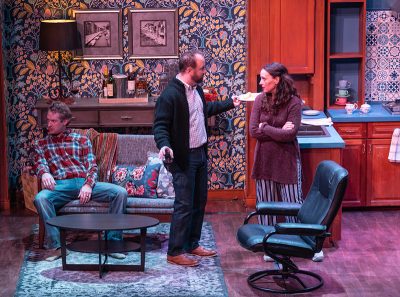 Golden, Sorenson, Cummins and Wallinger all give remarkable performances.  They make unlikable characters, somewhat interesting even if their relationships lack any sparkle or real chemistry.  Proof that good actors can make a boring script better.  Darin Anthony directed this show.  Jimmy Cuomo’s set design, Moira Wilkie Whitaker’s lighting and Warren Davis’ sound were truly the only interesting aspects to this production.

Theatre should inspire or inflame the senses, it should never bore.  Fortunately the dullness inflicted by this script is a rarity.