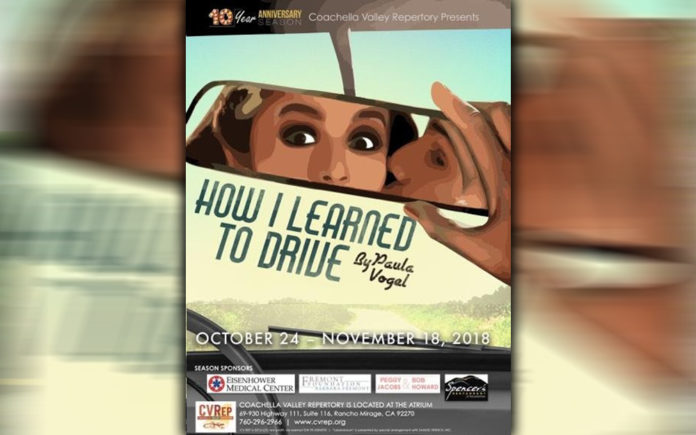 It’s a given that theatre often mirrors society and culture. The good, the bad and the ugly all reflected in the stories we tell.  In the age of #Metoo, it is important to note that sexual harassment and abuse of women and girls is not a new phenomenon.  It is an abhorrent behavior as old as time. What is slowly changing in our era is the refusal to accept and tolerate this abuse as a normal part of male behavior.

As evidenced by many of their previous productions, Coachella Valley Repertory does not shy away from taking on tough issues. Paula Vogel’s 1998 Pulitzer Prize winning play, “How I learned to Drive,” currently in production at CV Rep, is no exception.  In reference to her award winning play, Vogel said, “Taboo subjects always interest me. The eroticizing of children is so prevalent in the culture yet so seldom acknowledged.”  Vogel takes on that topic with a masterful pen in this script.

Author S.M. Stevens wrote, “When a show ends, for a few days, my body sizzles with left over energy, like a tree in the wake of a lightening strike.”  That is the exact effect that Vogel’s, “How I learned to Drive,” has on an audience.  It is the story of a woman who learned to navigate the roadmap of life through the twisted driving lessons of an uncle whose pedophilia shaped and distorted her worldview.  Angela Sauer is ‘Li’l Bit,’ whose non-liner memories span the ages of 11 years through 35 as she reveals the incestuous relationship that was prevalent in her life until she was able to break away at the age of 18.

Though a deep and often taboo topic, Vogel tells this story with humor, empathy and profound insight.  Sauer, performs the role of the protagonist with perfect nuances of realization and revelation. One of Sauer’s most notable skills as an actor is her ability to move this character between varying ages and aspects, without ever loosing the unifying connection of how this abuse impacted the child and the woman. Not just revealing the incest, but the sexual harassment that girls often face as a common and accepted part of growing up female.

Dennis Gersten portrays Uncle Peck, the adult man who becomes obsessed with a child and calls it love.  Gersten is wonderful in this role.  His empathetic portrayal of a despicable character proves that relationships are never black and white.  Vogel’s script explores the many shades of grey in human interactions.  Sauer and Gersten bring the varying hues of human nature to life with their incredible performances.

Jillian Taylor, Debra Cardona and Charles Pasternak are the ‘Greek Chorus.’  They are captivating as they perform the roles of Li’l Bit’s family members, playing out her recollections of scenes with her alcoholic mother, the “titless wonder”, her misogynistic grandfather “Big Papa,” her passive aggressive aunt and her submissive grandmother.

Joanne Gordon’s skillful direction gives this play the additional performance art quality that it deserves.  Characters and scenes flow upstage and downstage like a drive on a winding country road. Jimmy Cuomo’s creative set proves once more that when it comes to design, he is always at the top of his game. Moira Wilkie-Witaker’s lighting design, Kate Fechtig’s sound and Lori Jo Wood’s costumes all gave this show the top production qualities that CV Rep is known for.

How I Learned to Drive, is a brilliant script.  It is a play that every theatregoer should see.  And CV Rep’s production will allow you to see it as the Playwright herself would no doubt appreciate.