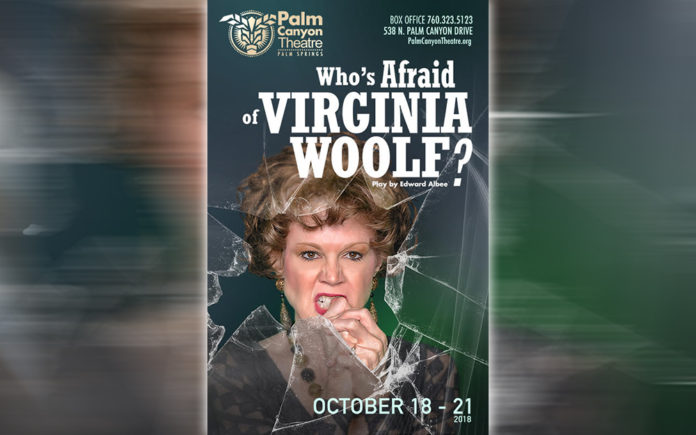 What is it about horror or tragedy that pulls us in and forces us to be unwitting accomplices to the most horrific of spectacles? Allowing ourselves to be held captive as we derive some perverse pleasure from the misery of others. Edward Albee’s 1962 Tony award winning drama, “Who’s Afraid of Virginia Woolf?,” is the best example of the human tragic condition that anyone could imagine. Palm Canyon’s production of this dark drama reveals the broken and bloody underbelly of a marriage gone horribly wrong. Albee explained his inspiration for the title as this; “Who’s afraid of Virginia Woolf means who’s afraid of the big bad wolf . . . who’s afraid of living life without false illusions.”

George and Martha a couple in their 40’s, are two coiled rattle snakes who rise to the full extent of their poisonous height as they strike out at each other and their house guests, Nick and Honey, a young couple in their 20’s.

Yo Younger, is brilliant as Martha. A smart woman who is trapped in a time when women must live out their ambitions through the lives of their husbands and base their self-worth on the success or failures of the men in their lives. Younger has the skill to crawl inside the skin of any character she portrays and wear the flaws like a queen’s crown. Martha is a tragic character, who has had every drop of joy squeezed out of her bloody ripped heart and Younger shows you every shred of her pain.

George is a college professor who has had all ambition and self-worth beaten out of him through failure and the relentless verbal kicks in the head by Martha. Richard Marlow, in his portrayal of George, portrays the shell of what used to be an educated and ambitious man. Marlow’s slow revelation of the sadistic and passive-aggressive person that George has become is mesmerizing, in a sick and twisted kind of way. Both Martha and George are choking on the bitterness of their toxic marriage.

Sean Timothy Brown as Nick and Phylicia Mason as Honey, the two unsuspecting visitors in George and Martha’s lair, are like deer in a headlight. I kept wondering how any sane person would not run, screaming out the door within minutes of witnessing the dumpster fire of the older couple’s relationship. At one point, Honey screams out, Just Stop, in the middle of George and Martha’s incessant verbal knife fight and for a moment I thought it was my own thoughts reaching its limits and pushing past my lips.

Brown is engaging in his performance as Nick, the pretty young biology professor who fulfills his role as the pawn used to slice another bloody cut in this tragedy and who will no doubt be irrevocably changed after this experience. Mason is wonderful in her limited performance as Honey, described as Nick’s ‘mousy, slim-hipped’ wife, and who seems to be a wasted opportunity in this script. She is shamed by George who berates her when she expresses her lack of interest in having children and spends most of the show in the shadows. Her fatal flaws mostly unexplored in this carnage. Honey and Martha are at opposite ends of the spectrum, yet in alignment with the societal expectation that as women it is their obligation to have children and if they can’t or won’t, then they are failures. While the measure of a man is his career and success, or lack thereof, as demonstrated by George.

It sometimes isn’t easy to direct a small cast in a single setting full-length play. Staging can become redundant. Fortunately, the frequency of drink refills in this alcohol sodden drama allowed director Michael Pacas to keep the actors in motion, if only back and forth to the bar. It is not their physical movements, but their psychological sparing that keeps the pace moving forward. Kristen Cunningham’s Set Design was perfect. A middle-class thread bare living room that aptly reflected the unraveling of the home’s residents.

Who’s Afraid of Virginia Woolf? had a limited run, ending October 21st. Del Shores’, “Six Characters in search of a Play,” will have a one-night run on October 27th and then Palm Canyon Theatre’s next full production is “Avenue Q,” running November 2-18.

Dee Jae Cox is a playwright, director and producer. She is the Cofounder and Artistic Director of The Los Angeles Women’s Theatre Project.