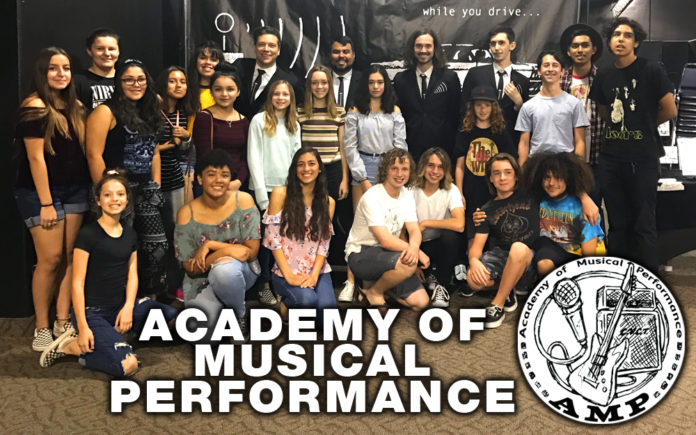 From the Publisher, Tracy Dietlin: It is with pride, respect, and admiration that we will be awarding the staff and creators of the AMP program this year’s first ever “Visionary Award” at the CV Music Awards on Sunday, June 4 at the Riviera Resort in Palm Springs.

With music programs disappearing at an alarming rate in our schools, more and more every year, having the AMP program here in the desert has given our youth the opportunity to learn and perform music under the tutelage of an amazing staff/board of directors, teachers and creators that include:

A special shout out to Goldenvoice for supporting this venture from the beginning through the CVCT Trust.

Academy of Musical Performance (AMP) leadership team created a special workshop for 21 of the young musicians from the AMP after school program in which they learned from local industry professionals gathered at the IPAC in Indio. This group included Phil Lacombe & Tracy Dietlin of CV Weekly who are also talent managers, with their company Mystic Avalanche Entertainment;  Lisa Lynn Morgan, talent booker for Big Rock Pub and vocalist in her own band “Lisa Lynn and the Gentlemen”; legendary music producer Stan “the Man”  Foreman; and local fan favorite band “The Flusters” (Dougie VanSant Jr. on Vocals/ Guitar, Mario Estrada on Bass/ Vocals, Danny White on Guitar/ Vocals and Daniel Perry on Drums).

The day began with a 25-minute outstanding performance from the Flusters, complete with fog machine and lights to showcase their stage presence abilities. It was followed by a panel discussion and Q & A with the other industry professionals giving their perspective as a talent manager, talent buyer, producer and performer.

Some favorite takeaway advice came from Mario from the Flusters when he said “Practice until you can’t get it wrong not just until you get it right.” Jake Sonderman, a guitarist, bassist and vocalist in the AMP program remarked “I learned so much!  It was great to be able to talk one on one with a legendary A&R man like Stan Foreman and ask him questions.  I could also talk with Tracy Dietlin about how a management company works and what the steps are.  The Flusters were incredible to watch and I loved listening to how they started out to how things are now.  My favorite thought was about working problems out by all sitting down together as a band.”

At the conclusion of the 3-hour workshop, everyone in attendance was given their choice of a variety of high end speakers, headphones, or earbuds provided by Beats by Dr. Dre, donated by Goldenvoice to the AMP program.

After 3 separate audition dates, AMP will announce their summer camp lineup of musicians at the end of May with Summer camp beginning June 26 for 4 weeks from 10 a.m. to 5 p.m. Monday through Friday at Shadow Hills High School with a public evening showcase performance July 22, 2017. The group intends to continue the after-school program in the Fall and perform throughout the Coachella Valley and beyond in the Winter and Spring.

Within their first two years as an act, The Flusters were invited to play major music festivals such as Coachella Valley Arts & Music Festival 2016 and Echo Park Rising 2016. They are currently working on their 2nd EP set to release in the Fall of 2017 and gearing up for their debut national tour this summer. Beginning June 1st, they are launching a 30-day crowdfunding campaign on kickstarter.com to help cover the costs. Visit theflusters.com for more information.

About Phil Lacombe and Tracy Dietlin

Dietlin started Mystic Avalanche Entertainment in 2001. As the President of the company she focuses on working with bands to get their music placed in TV, Movies, Commercials and Gaming, as well as trying to get bands signed to a record label, while Lacombe serves as Vice President and works on setting up shows, touring and the merchandise end of the business.

Lisa is the Head Music Writer at CV Weekly, Founder of Southern California Desert Music Alliance (SCDMA), talent booker at The Big Rock Pub in Indio and a talented singer and songwriter currently regularly playing around venues in the desert with Lisa and the Gents.

About Stan “the Man” Foreman

With 15 years in Top 40 radio as a DJ, Program Director, and station owner, Foreman built, owned, and operated large live music club for 5 years. He produced and promoted concerts with touring acts such as The Beach Boys, Glen Campbell, Paul Revere & The Raiders, Van Morrison, among others. He joined Capitol Records in Hollywood in 1975 and was a West Coast Promotion and Marketing Executive for 23 years retiring in 1998. He is currently Entertainment Director for the Omni Rancho Las Palmas Country Club in Rancho Mirage and is the leader and keyboard player for local classic rock band The RoadRunners.

AMP is a music education program whose goal is to enrich the lives of young musicians living in the Coachella Valley by fostering productivity and social responsibility through creativity, communication and collaboration in the development and enhancement of musical performance and concert production skills through participation in a “rock band” style educational setting.  AMP is known for its outstanding summer program, featuring the Valley’s top musicians teaching, in small rock band format, the top young musicians in their performance and concert production skills through rehearsals, workshops, individual instruction, and live performances.  Due to high demand, AMP has added an after-school program to continue the rock band education and experience throughout the school year. The program was created in 2015 by a committee of volunteers involved with Coachella Valley Community Trust, and is made possible by seed funding from Goldenvoice. They are undergoing the process of creating their own 501(c)3 with its own board of directors, separate from CVCT. For more information about Academy of Musical Performance visit www.ampcv.org or call 760-537-5AMP (5267).