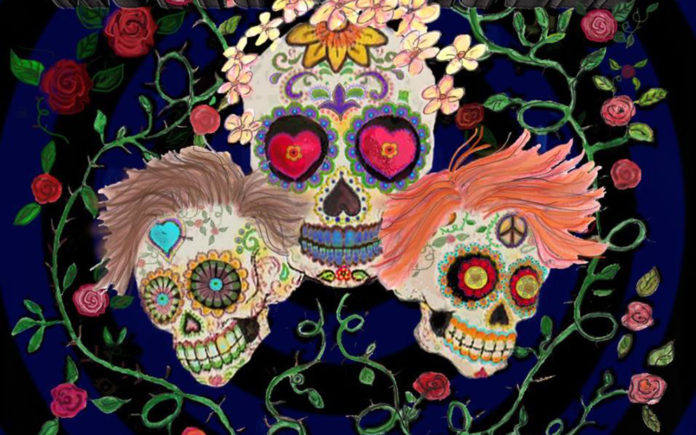 That’s the Action Skulls getting down to business on their debut album, Angels Hear. Although the band has only been a going concern for three years, each member has endured the highs and lows of the music industry and show business for decades.

John Cowsill first found fame behind the drum kit of his family’s band, the Cowsills. Along with his brothers, Bill, Bob, Barry and Paul, sister Susan and mom, Barbara, the group stormed the charts in the late ‘60s. Three songs, “The Rain, The Park And Other Things,” “Indian Lake” and “Hair” were Top 10 hits. They were also the real-life inspiration for “The Partridge Family” television show.

After the family band broke up, John continued making music with artists like Dwight Twilley and Tommy Tutone. He currently plays drums and sings with Mike Love’s touring version of the Beach Boys. Still, he always finds time to play semi-annual reunion shows with his siblings. When he isn’t out on the road, he can be found hanging with his wife, Vicki Peterson.

The best known Action Skull-er, Vicki Peterson first achieved massive success in the mid ‘80s, playing guitar and singing in the Bangles. As a kid, growing up in the San Fernando Valley, Vicki and her sister Debi became Rock N’ Roll obsessives at an early age. Her guitar was her constant companion.  Along with Susanna Hoffs on vocals and guitar, Annette Zilinskas on bass (later, ex-Runaway Michael Steele took Annette’s place) and Debi on drums, they became the Bangs, then the Bangles, sharing an affinity for the Baroque and Psychedelic sounds of the ‘60s, they were progenitors of the Paisley Underground movement, (along with Dream Syndicate, the Three O’Clock and Rain Parade).

The Bangles were immediate sensations on the L.A. scene. Signed to Columbia Records, their first long-player, All Over The Place, released in 1984. A critical hit, it drew the attention of Prince, who was at the height of his Purple Reign that year. Under the pseudonym Christopher, he wrote the song “Manic Monday” expressly for them. It appeared on their sophomore album, Different Light, in 1986 and propelled the band into the mainstream.

Two years later, their third album, Everything” included the icky (albeit immensely popular) power ballad, “Eternal Flame.” But the band called it quits in 1989. In the ensuing years Vicki joined the Americana band, Continental Drifters, which included best pal Susan Cowsill. She and Susan also branched out as the Psycho Sisters and finally released their debut In late 2014. She’s also remained busy with Bangles reunions.

Bill Mumy (pronounced “Moo-Mee,”) first gained acclaim as a child actor, working in movies alongside legends like James Stewart and Brigette Bardot in “Dear Bridgette,” and Troy Donohue and Stefanie Powers in “Palm Springs Weekend.” He was also featured in classic episodes Of “Twilight Zone” and made the usual guest spots of sitcoms like “Bewitched,” “I Dream Of Jeanie” and “The Munsters.”

From 1965 to 1968 he made his most lasting impact as young Will Robinson on the TV series “Lost In Space.” He continued to act through his teen years in films like “Bless The Beasts And Children” and “Papillion.” By 1970, Bill shifted his focus to music, he recorded solo albums and played with people like Rick Springfield and Shaun Cassidy.

Bill had his biggest musical success as half of Barnes & Barnes. The duo concentrated on satirical music and had a left field hit with “Fish Heads.” The song’s innovative video went into heavy rotation on MTV. Since then he has remained a fixture on the L.A. music scene and he continues to work as a voice actor.

Fast forward to Christmas 2013, and John, Vicki and Bill were all guests at a Christmas party hosted by Bill’s “Lost In Space” co-star, Angela Cartwright. The trio would up around the piano singing old favorites from the Beatles, Rolling Stones and Beach Boys. Pleased with their symbiotic vocal blend, they kicked around the idea of forming a band.

Bill was so energized by the prospect that he went home and wrote a clutch of songs. Later that same week he ran into legendary session bassist Rick Rosas (Joe Walsh, Crosby, Stills, Nash & Young, Etta James, Jerry Lee Lewis, Neil Young). Bill’s enthusiasm about this new venture was contagious and Rick wanted in.

Once Bill, John and Vicki accumulated eight new songs, they corralled Rick and booked time at ReadyMix Music (the same recording facility where classic albums by Jackson Browne, Little Feat and Warren Zevon were made), in early 2014.  The as yet, un-named four-piece quickly recorded eight songs. Everyone returned to their Beach Boy, Bangle, Crazy Horse day jobs. In a case of Rick, art imitated life when he was cast as bassist in the bar band Meryl Streep fronts in the Jonathan Demme film, “Ricki And The Flash.” For the rest of the year, they surreptitiously worked on the record sometimes via text or email.

But then the unthinkable happened, Rick Rosas died rather suddenly in December. It was a crushing blow for Bill, John and Vicki, (along with the rest of the L.A. music community). Slightly shell-shocked, they set the project aside for a while. But ultimately, the pull of the music proved too great, and the trio wrote and recorded three more songs with both Bill and John’s son, Will Cowsill filling in on bass duties. The result is Action Skulls’ long-player debut, Angels Hear.

Bill is front and center on three tracks. “In The Future” opens with a pounding rhythm that’s equal parts Watusi Rodeo and relax-fit Bo Diddley-beat, soon rumbling bass and shang-a-lang guitar chime in. Bill and Vicki take first verse, his deadpan delivery compliments her dulcet tones. On the second verse, John antes up with a lip-quivering urgency that recalls the swivel-hipped King of Rock N’ Roll.

Slightly cryptic lyrics sketch out a casually carnal assignation, wondering if one night stands will go the way of the Dinosaur in the wake of less personal interaction; “In the future will technology show some mercy to humanity?” The question is underscored by smoky harmonica runs and a guitar solo that pivots between twangy and tropical.

“Faith Waltz” is shimmery and spacious in ¾ time. A cosmic exhale, it’s powered by prickly lead guitar, lush keys, thrumming bass and splayed rhythm guitar. Twinkly and delicate, it sets down a spiritual path; “Rejoice I say, although gone today love burns eternally, in heaven so bright, forever in light, waiting, waiting for me.”

Warm piano notes lick the edges of the lyrics on “Belle Of The Ball.” The portentous melody, Bill’s sardonic vocals and his vivid narration recall the late great Warren Zevon. Conversely, the instrumental break displays the halcyon grace of the Beach Boys’ epochal Pet Sounds record.

The spotlight cedes to Vicki on three tracks, “If I See You In Another World,” “The Beast And The Best” and “Map Of The World.” “If I See You…” is spectral and haunting. Stinging guitar riffs ricochet through roiling bass and shuddery percussion. Questioning a long-term relationship, she asks “Tell me if you can, how this all began, I’m a cameo in your one man show.”

“The Beast…” is the album’s penultimate track. Gritty guitar riffs split the difference between Western twang and Spaghetti Surf. Chords pool and eddy around grinding bass lines, airy keys and a rock steady beat. Here, her mien is sweet and sour as she ticks off a lover’s pro’s and cons; “You got standout color on the silver screen, you hit me hard, knocked me out clean/You’re the bad that feels so good…” reluctantly, she admits “you’re my rescue you’re my trap.” As the tune stretches out the instrumentation gets more hoodoo voodoo-y as stop-start rhythms downshift into an insistent tribal tattoo. Rippling riffs echo and sway, locking into a feedback-y crescendo.

Meanwhile, “Map…” is stripped down and pensive. Spiky acoustic guitars lattice over spiraling mandolin filigrees and a sweet string section. The lyrics trace the circumference of a relationship in geographic terms, perfectly apropos for a couple who often criss-cross the globe on separate musical missions.

The spirit of the trio’s Christmas sing-a-long is alive and well on both “Feed My Hungry Heart” and “Standing On A Mountain.” The former is a heady brew of Soul and swagger that shares some musical DNA with the Little Willie John chestnut “Leave My Kitten Alone.” A variation of the tried and true 24-bar-Blues formula, the instrumentation blends a walking bass line, high lonesome harmonica, jagged guitar chords and walloping back-beat. Each singer

takes a verse, but the song really coalesces around the chorus, when John’s stentorian tenor wraps around Vicki’s warm contralto and Bill’s rough-hewn rasp.

The latter is a ‘60s style Garage/Psych workout that is anchored by a crackling rhythm, buzzing bass lines, scabrous guitar licks and a spooky wash of organ. Tongues firmly in cheek, John, Bill and Vicki indicate that a certain “Little Miss Blue” could feel the earth move if she were in the right place at the right time.

That sardonicism is carried over to “The Luckiest Man Alive.” Over growly guitars, fuzzy bass and a snap-back beat, John seriously intones “I’ve been travelling oh so Far, with two things on my mind: To get back to you baby……. The other I forgot.” Truly, at its core, this tune is a sincere paean to marital bliss.

The album ends on an ambitious note with “The Land Of Dreams.” Liquid guitar riffs cascade over sandblasted bass and a tick-tock rhythm. The lyrics offer a barely veiled critique on our fascination with documenting the minutiae of everyday life; “Look overhead, what do you see? Under the bed up in the tree/The camera’s on, there’s no place to hide, the damage is done and the river’s wide.” Only sleep offers respite; “I’ll see you in the land of dreams.”

Naturally, the album is dedicated to Rick “the bass skuller” Rosas. Hopefully, the Action Skulls will be able to slow their very busy schedules and find time for some live shows, maybe a tour, and even more excellent music. Wouldn’t that be cool?