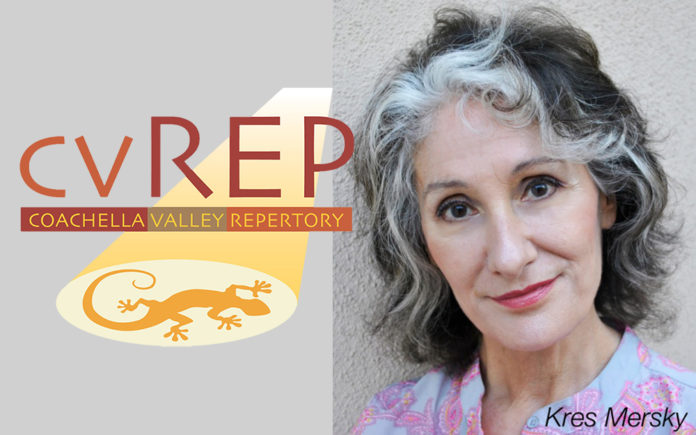 Directed by Paul Gersten, The Life and Times of A. Einstein is an off-beat comedy about a day in the life of the great scientist as seen through the eyes of his longtime “secretary/watchdog.” The play features one character on stage, and that character is not Albert Einstein. It is rather Ellen Shoenhammer, his secretary, portrayed by playwright/performer Kres Mersky. Ellen, is more than Mr. Einstein’s secretary. She is his chauffeur, his bodyguard, and a liaison to the media, protecting his public image from scandal, and generally managing all of his business affairs.

The play takes place on Albert Einstein’s birthday. There’s a press conference for him, and he’s been unavoidably detained. Ellen, forced to address the reporters (who would physically be where the audience is) talks to them about her beloved boss, fielding questions and evading answers when necessary. She relates her long association with the Einstein family, how she met the great man and came to work for him, the departure from an ever-more-dangerous Berlin to work at Princeton University, and the extraordinary research that changed the way humanity perceives the entire universe.

Through the course of the play, the audience is given a substantive insight into one of the most extraordinary lives of the century just past, that of Albert Einstein, the man whose name is synonymous with genius.

CVRep will present other special performances throughout the summer, including additional Cabaret and Jazz performances, Dance, Classical Music Concerts, and more.

THE COACHELLA VALLEY REPERTORY THEATRE is a non-profit, professional regional theatre. It is the only theatre in the Coachella Valley that has Small Professional Theatre (SPT) status with Actor’s Equity.

CVREP MISSION STATEMENT: The Coachella Valley Repertory Theatre is an educational and dramatic theater organization that presents innovative productions and children’s outreach programs designed to enrich the quality of life for Coachella Valley residents and visitors. For more information, call 760-296-2966 or visit www.cvrep.org

Kres Mersky hails from Altadena and lives with her husband / director Paul Gersten. As an actress, Kres has performed widely in film, theatre and television, appearing in such shows as Charlie’s Angels and The Practice. With an early and passionate interest in the life of the celebrated dancer, ISADORA DUNCAN, Kres created a one-woman set piece on Isadora’s life, which she is currently performing extensively at colleges, universities and theatres on the West Coast and in Canada. She also created another evening, At the Codfish Ball; a collection of characters written and adapted from contemporary fiction. Her first full length play, The Life and Times of A. Einstein, in which she also starred, is an off-beat comedy about a day in the life of the great scientist as seen through the eyes of his longtime “secretary/watchdog”, Ellen. A. Einstein has had several productions in Los Angeles; its second production was at the Mark Taper Forum. Kres has been nominated by the Mark Taper for The Susan Smith Blackburn Prize in playwriting. Her second full length play, Algerian Romance was work-shopped at the Mark Taper Forum, and produced at Primary Stages in New York. Kres is currently in rehearsal with her third full length play, Flag Day, a comedy about an American family and their unexpected dinner guest. Her numerous one-acts are currently being performed in and around the U. S. She also has been a regular contributor to the new political magazine, Country Connections, writing film and theatre reviews as well as political commentary. Kres is also a painter and has had numerous solo and group exhibitions of her work. In addition, Kres has taught creative writing, acting and art in the L.A. Unified School district. Kres is a member of Theatre West, the Dramatist’s Guild and The Alliance of Los Angeles Playwrights.

Paul Gersten; (Director) has directed commercials for thirty years in addition to directing plays at Theatre West in Los Angeles. He has directed Kres Mersky in her one woman play Isadora Duncan: A Unique Recital.