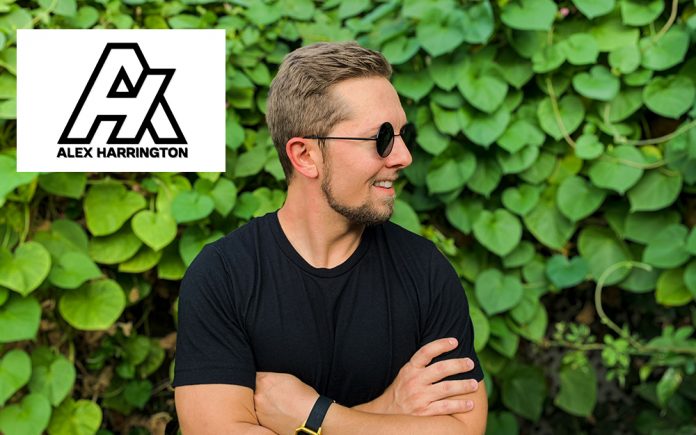 It’s only been over the past few weeks that the popular, local music creator and event DJ, Alex Harrington announced that he has passed the mark of not only achieving over a million streams on all major platforms…he become the number one streamed artist out of the Coachella Valley. If you ask me or pretty much anyone else that knows him…It couldn’t have happened to a nicer guy.

I first met Harrington around eight years ago at a local, pool party event at a boutique hotel and clearly remember through our interactions that he was not only conscientious and professional…he was really good at what he did. As the years have passed, I have found satisfaction in watching him rise up in his career and grow as an artist, a businessman and all around good dude. That being said, I was honored to spend a few minutes chatting with Alex about his road to success.

CVW: So Alex, I guess the main reason that we are even talking right now is that you have amazingly, accumulated over a million streams of your music online which is a big, freaking deal! How did you find that out? Did you get some sort of official notification or did you sort of just calculate it out and figure it out yourself?

Harrington: “I’m actually in my 30’s so when I was a kid growing up, the definition of this type of success to me would be like a gold or platinum record. In this situation, I really just keep track across all of the platforms. For instance, on Spotify this year, I had a couple of really big months. So, basically I added them all up and was like, ‘Hey! You finally hit a million.’”

CVW: That’s a pretty notable achievement. You mentioned you had, “…a couple of really big months.” Do you think that the pandemic hitting had anything to do with your uptick?

Harrington: “Totally. You know, the fact is that so many of us artists had to stop doing our thing for a while. One of the fortunate things about being a musician is that you don’t always have to perform live. You can always go record and write. For myself in particular, this DJ stuff is all on the internet for the most part. So, every day I just buried myself into songwriting and making as much music as I could to fill that void of not being able to play live.”

CVW: I can completely understand that. I spend a lot of time interviewing bands and I know firsthand what it’s like to be cut off from rehearsing together and jamming and doing all of those things that not only helps us create, but feeds our souls. Luckily, with what you do, you can do that on your own. Do you think that is part of what got you through the tough times?

Harrington: “I would definitely say that’s true. You know, like many other artists, I work a fulltime, day job. So, not having that outlet of being able to get out there to the people and share music made a big difference in my life, so for me that outlet became me making my music at home. That definitely got me through the pandemic. I didn’t realize how much I needed it. I have been playing music for 30 years and I didn’t realize how much I needed to do it until I couldn’t do it. It’s so much about the interactions and coming together. Not being able to do that was hard.”

CVW: Let’s backtrack a bit. According to your website, you have been officially working as a DJ since 2011. How did you get started doing that in the first place?

Harrington: “I’m originally from Northern California and came up playing bass in punk rock bands. When I came down here I was only seventeen and all of the sudden, I wasn’t in a band anymore. I graduated High school and tested out early because I didn’t want to be without my friends. It was the same thing with my band. I didn’t want to start a new band without my friends.”

Harrington continues: “I always liked electronic music…house music in particular. So, I just kind of dove into it because I could do it by myself and over the years it just evolved.”

CVW: How exactly did you get yourself out there on the scene?

Harrington: “Honestly, I just actualized my band roots. Back in the day we would make a record and take it out to the bars and venues that we wanted to play at. I did the same thing out here. I recorded mixes and would shoot them out to local venues and introduce myself. Having a bio and a decent website definitely helps a lot. The digital era helps but, in the long run, pounding the pavement with demos and pure initiative has done a lot.”

CVW: It’s been several years since we have interacted and I know there have been a lot of changes for you, not only in your career as a musician, but on the family front, am I right? 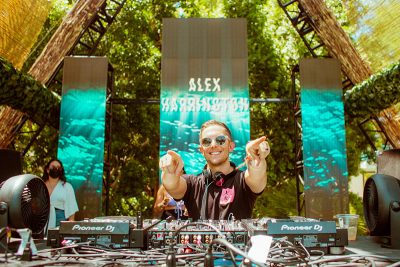 Harrington: “Yes! I’m married now and not only do I have a baby, but three beautiful children that my wife brought into my life. It’s definitely changed a lot. Four kids and two dogs…it’s crazy from day to day but, for me, it makes me even more passionate about the music that I make because I can share it with them. Everyone says, “I’m not like the other parents, I’m a cool parent.” But, I really try to enjoy it and DJ with them. They come to my gigs and I think that’s the most fun I have these days. It’s like having my own little fan club and I love it.”

CVW: You have been doing this for a while now and have worked your way towards some calculable success in your field. Whenever I get the opportunity to interview artists who have achieved such notable accomplishments, I like to ask them, ‘If you could go back in time and talk to your younger self about being a musician…what advice would you give yourself?’

Harrington: “Oh, yeah! If I could jump into the De Lorean with Doc and go back in time, I would definitely tell myself to stick to what I am doing. But, I think in the past I took a lot of grace time when my life got chaotic or I was busy. I would take breaks from music. I think the one thing I learned for myself was, ‘Don’t stop.’ Don’t force yourself to do it but, don’t stop because you think that you’re too busy doing other things. I’ve achieved a lot of growth over the past few years with my music, and it’s because I’m more mature and focused now. That said, sometimes I think to myself. ‘Wow, if only I had stuck to it back in the day when I was younger…persevering through the hard times and making music no matter what, who knows what could have happened by now?’”

To keep track of Alex Harrington’s new releases, events and booking information, you can find him on all major platforms as well as his website and social media.