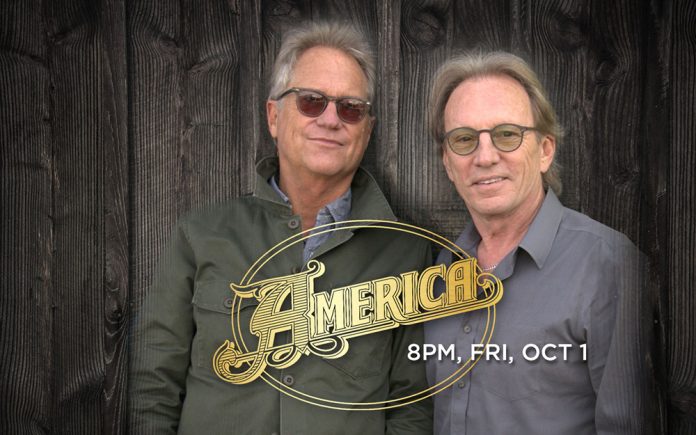 “Most marriages don’t last as long as the musical partnerships in this band,” I say to Gerry Beckley, founding member of iconic rock band, America. “How do you and Dewey [Bunnell, co-founder] navigate it so well?” He replies that it really is like a professional marriage. “We used to say that because we kept separate private lives, it allowed us to share professional lives.” There’s even more of a contrast now, he tells me, since he and his wife live in Sydney, Australia and Dewey and his wife, Penny, have a home in Wisconsin from May to October (and reside in Southern California for the remainder of the year), so for much of the year they are quite literally on opposite sides of the planet. This distance, he assures me, is not a necessity and rather just their personal journeys. “It’s a joy working together,” he says of his bandmate. “He’s the world’s best partner.”

Their partnership dates back even further than the band’s inception. Beckley and Bunnell, who formed America in 1970, met prior to that at a London high school as sons of US Air Force personnel. In 1972, America released its eponymous debut album, which featured such hits as, “Horse With No Name,” and “I Need You.” Their breakout hit, “Horse With No Name,” was initially confused by many as a Neil Young song. “It was our first single,” Beckley tells me “but it was not on the first album [the album was first released without the track, and re-released with it when it became a hit]. The initial reaction was it sounded like Neil Young. Some thought it was him performing under a different name because we were a new band and no one knew much about us yet. So that added to some of the story of the song. There’s a quote in Neil Young’s autobiography that even his dad mistakenly attributed that song to him.” This number one hit was indeed theirs, though. When asked what it was like the first time the band heard their own song on the radio and what their reaction is when they hear them now, Beckley says, “We hear them a lot, which is the good news. We first started hearing our songs on FM stations who would play songs from our album. Shortly after that, “Horse With No Name” became huge in the U.S. and we would hear it everywhere. We would be in a limo and it would be on two or three stations at the same time. It’s an amazing feeling, then and now, to know that many of your songs permeated the culture and can be heard everywhere.”

Of the equally smashingly successful hit, “Sister Golden Hair”, which remains a California anthem and one of the ultimate road songs, I asked Beckley what it is about that song that makes it so enduring. He mused, “Our tour manager used to label all our stuff. This one was, ‘nothing can hurt me now music.’ It has a good vibe. “Ventura Highway” has that same vibe. It’s in our show every night and it’s magic. I don’t know the exact ingredients for it, but if we did, we’d all make these songs all the time.” Despite this, it’s not his favorite song to perform live. That honor is bestowed upon many songs and can vary from show to show, but is usually “Ventura Highway”. “Horse [With No Name]” and “Sister [Golden Hair Surprise]” were #1 hits, but “Ventura [Highway]” hits all the right spots.”

Asked about their influences and if those have evolved throughout the years, “We usually would default to the Beach Boys and the Beatles, Brian Wilson and Lennon/McCartney. Those don’t change. It’s hard to have anything that is going to impact you now like it did between the ages of 12-20. Kids that grew up with Eminem aren’t going to be as impacted by what the listen to later, that stuff imprints itself on your soul.” In spite of that, he does listen to many artists and some will make a big impression, even now. “I listen to Jeff Tweedy [of Wilco] quite a bit. He’s a very prolific guy, always very good stuff from him.”

Live music took a hiatus over the past year and a half. This time away from touring and performing meant something different to each musician. What did it mean to Gerry Beckley? ”I’ve had 14 months straight in Sydney, which was a gift that I never could have given myself. It was a learning experience because as a touring musician, the default rationale is ‘Oh, I bet you’re going nuts!’ One thing I did, was build a studio in our house in Sydney. I used to have one, but in the last decade or so didn’t have one. So I was able to do a lot of singing and writing during this time.” Getting back to it this Friday, October 1 at Fantasy Springs Resort Casino, what can fans expect? “I would like to think it’ll be everything they expect and hope for. Good news is, it’s a lot of hits. We mix it up every year, though – our concert never sounds like a greatest hits album. At the same time, we say ‘if we don’t have it down by now we’re screwed.’”

They do have it down, they are fantastic, and you can catch them this Friday at Fantasy Springs. Click here for more info and to purchase tickets: https://www.fantasyspringsresort.com/america/