The Great Kat Metal Goddess visits her local church on a Sunday.  The Great Kat whips out her guitar, shreds and moshes Bach’s sacred Baroque masterpiece. 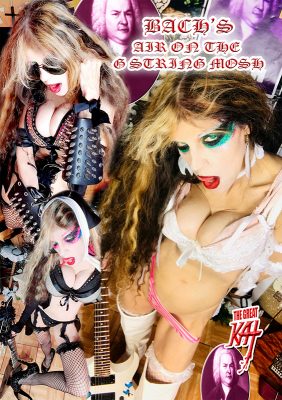 Inspired by the sacred ambience, The Great Kat enters the confessional booth to confess her demonic & wicked Seven Deadly sins to the priest; whipping our chains, backward crosses, whips and more symbols of the Seven Deadly Sins to demonstrate her evil ways.  The priest forgives The Metal Goddess and decides that J.S. Bach’s music is so powerful that even evil temptation can’t undermine it.  The holy priests, bishops, monks and even J.S. Bach unite by moshing in unison in appreciation of Bach’s metal masterpiece!

The Great Kat Metal Goddess performs Johann Sebastian Bach baroque genius music “Air” composed in 1730.  Originally the 2nd movement from Bach’s Orchestral Suite No.3, BWV 1608, Bach’s famous masterpiece gets The Great Kat’s metal treatment as The Great Kats Baroque Guitar Shredder virtuosically shreds 5 lead guitars with beautiful melodic contrapuntal melodies and harmonies, while Great Kat’s heavy metal rhythm guitars, bass and drums pound with headbanging and moshing rhythms.  J.S. “Air” is one of the most popular Baroque Classical works in history and the The Great Kat, Julliard grad violin virtuoso and “Top 10 Fastest Shredders Of All Time” – Guitar One Magazine, is the only guitar/violin double virtuoso shredding Bach’s masterpiece at high speeds and moshes, while bringing his genius music to a whole new generation with metal. 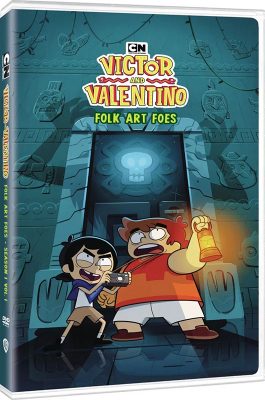 Get ready to escape boredom and embark on hilarious adventures in a small town filled with legendary stories and mythological encounters where fantastical creatures and folklore come to life.

Created by Diego Molano, this supernatural adventure comedy is about two half-brothers who spend a summer with their grandmother in Monte Macabre, a small, mysterious town where the myths and legends of Mesoamerican folklore come to life.   With a run-time of almost two and a half hours, the 18 engaging episodes include: “Folk Art Foes,” Dead Ringer,” “Brotherly Love,” “Chata’s Quinta Quinceañera,” “Legend of the Hiddn Skate Park,” “Cleaning Day,” “The Babysitter,” “Hurricane Chata,” “Lonely Haunts Club,” “Suerte,” “The Dark Room,” “The Collector,” “The Boy Who Cried Lechuza,” “Boss for a Day,” “Cuddle Monster,” “Los Cadejos,” “It Grows” and “Welcome to the Underworld.”

Comments or Questions?  I want to hear from you.