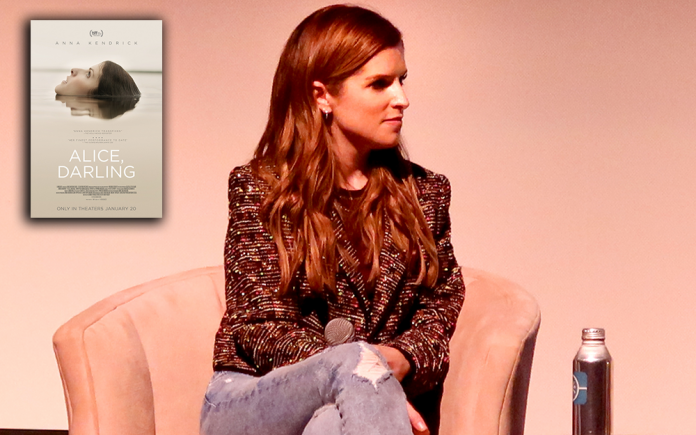 On Saturday, January 14, a Talking Pictures screening of Alice, Darling took place at the Annenberg Theater, where lead actress Anna Kendrick was in attendance to take part in a Q & A session after the film.

Alice, Darling follows Alice (Anna Kendrick) while she embarks on a girls trip weekend at a lakeside cabin when her childhood friends begin to suspect her picture-perfect romance is a carefully curated facade. Anchored by Kendrick’s visceral, career-best performance, this potent psychological drama incisively depicts the physical and emotional toll of intimate partner violence. 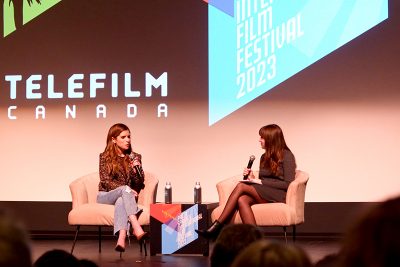 “The idea of pursuing something that is not usually what is asked of me or what people want from me, and trying to trust that it might still be interesting was scary and and really exciting. I also felt like I had built a lot of tools over the course of my career—tools that I’m really proud of and could help me become the kind of actor I wanted to be in this project,” shared Kendrick.

This role is a thematic departure for Kendrick, who has been known for her comedic work in the Pitch Perfect film series and other light-hearted supporting roles. Alice, Darling puts Kendrick front and center as she depicts the silent struggle of enduring through an abusive relationship, within a story that shows more than it tells.

“For me personally, this role was a very valuable exercise in rebuilding my own self-trust. And that was to kind of tolerate the discomfort of the first 15 minutes of this movie. There were scenes that we did where Alice is kind of a bummer and not that great to be around. And I wanted to trust that the audience would still invest in her and feel for her and believe her,” said Kendrick.

The script for Alice, Darling focuses on feelings and the gradual payoff of actually seeing them come alive onscreen—with Alice’s inner turmoil being represented by a subtle yet powerful performance from Kendrick. There are bits and pieces of that psychological emotional abuse sprinkled throughout screenwriter Alanna Francis’ script in a way that does not resort to stereotypes.

“A lot of the script was just so beautiful. It was like this piece of poetry, but I also saw what she was creating. And I think my favorite thing about it was that it really didn’t focus on the acts that this guy did. It was just like, look at this woman and like, try to tell me she’s not in an abusive relationship. And I felt like that was such a bold endeavor, because when you’re in that experience, that’s really all you have. You can catalog evidence all you want. You can write down everything you said and everything he said and every date and every time. And like, none of it really adds up to anything until you just look at what you were going through. And that’s the only thing that you can trust, you know? So I liked that it came at it from that way because, yeah, it just felt like the experience of this woman is enough for us to believe her,” explained Kendrick.

The film enables Kendrick to act in a role of vulnerability yet silent strength in experiencing a tumultuous relationship that, although not physically harmful, is just as toxic. Any time the audience sees Alice tug and pull out her hair strands, it is evident that everything is hurting on the inside for the character. Even small comments alluding to dietary restrictions made by her boyfriend Simon (Charlie Carrick) exemplifies somebody who has so very much internalized any perceived action or comment from their partner.

“I think that that’s why it’s so stomach turning and the performance that Charlie gives is so thoughtful. He was such an incredible creative ally to me because he never wanted to let Simon fall into caricature, because I think that does a disservice not just to Simon as a character. It does a disservice to the movie and to Alice. Like if he’s just this mustache twirling control freak, then it’s like, what is wrong with this woman that she’s with this villain? And the fact that he was always coming from a place of hurt and desperation and terror and masking that. But I can feel it when I watch the movie, and I felt it from him in the scenes. And that’s the piece that I think keeps you hooked in is you can feel like, oh, there’s a curve underneath this, so I want to help, or I am hurting you? I am doing something wrong? So he never let it plateau, if that makes sense. He never takes the easy way out. He was always working really hard to be coming from a place of a guy who felt genuinely victimized, which I know was very uncomfortable for him,” shared Kendrick.

Alice, Darling is exclusively playing in AMC Theaters this month and available for streaming.