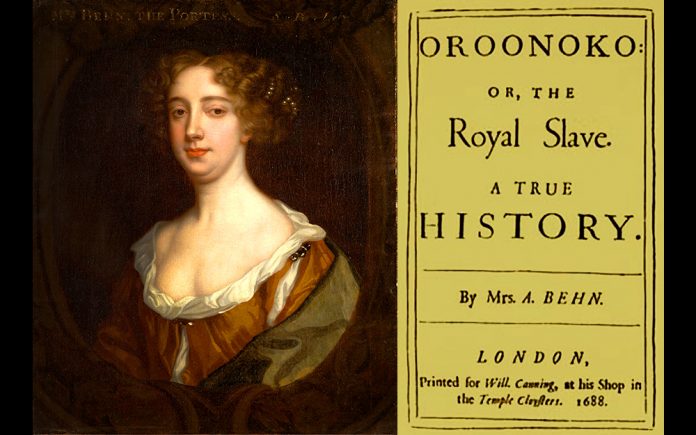 “Aphra Behn; “it was she who earned them (women) the right to speak their minds.”

William Shakespeare, (April 1564 – April 23, 1616,) is a name known to most as a famous and celebrated English Playwright.  Some have doubted the authenticity of this author, citing that records of the time indicate that Shakespeare likely received only a local primary school education, did not attend university, and therefore would not have learned the languages, grammar and vast vocabulary on display in Shakespeare’s works. Historians note that both of Shakespeare’s parents were likely illiterate, and it seems as if his surviving children were as well, leading to skepticism that a man of letters would neglect the education of his own children.  It has also been rumored that a woman was potentially the true author of these great literary works. Author Gilbert Slater, proposed that Shakespeare’s work may not have been written by a well-educated nobleman — but by a well-educated noblewoman.

Pointing out what he saw as feminine attributes to subject matter and writing style, as well as the long list of strong, convention-breaking female characters, Slater declared that Shakespeare had likely been a front for Mary Sidney. The sister of poet Philip Sidney, Mary, received an advanced classical education, and her time spent at the court of Elizabeth I would have provided ample exposure to the royal politics that played such a key role in Shakespeare’s work. Mary, was an accomplished writer, completing a highly praised translation of religious works, and several “closet dramas” (plays written for private or small-group performances), a format frequently used by women of the era who were unable to openly participate in the professional theatre.

Given the fact that women were not allowed to participate in theatre during Shakespeare’s time, and the fact that few historical women have received recognition for their achievements, it is always a strong possibility that history does not reflect the accuracy of the times.

Though the true authorship of Shakespeare’s work may be questioned, the woman who is given her due credit as being the first English female Playwright is Aphra Behn, (December 14, 1640 – April 16, 1689.) Not a name that comes to mind as easily as Shakespeare, Behn who was born 24 years after Shakespeare’s death, was still a captive of her time.  A playwright, a novelist and a poet, Behn was labled a ‘loose’ woman for daring to step outside of the customary women’s role.  Women in the theatre, in general, had always been accused of being morally compromised, as has been the reality in many professions, a woman in a traditionally male profession was subject to attack.

Behn, served as a spy For King Charles II, in Antwerp Holland and spent time in a debtors’ prison due to the King’s slow payment of her earnings. But when she began writing for the stage and earning her living as a writer, she broke cultural barriers and became a role model for the generations of women who followed.

Forced by debt and her husband’s death, (Mr. Behn is said to have died in 1665, though some have suggested Aphra, may never have been married at all, and only taken on the guise of “Mrs.” for propriety and protection’s sake.)  Behn, began to work for the King’s Company and the Duke’s Company, Players as a playwright. She had written poetry up until this point.

While she is recorded to have written before she began drowning in debt, John Palmer, said in a review of her works that, “Mrs. Behn wrote for a livelihood. Playwriting was her refuge from starvation and a debtor’s prison.”  Her first play, The Forc’d Marriage, was staged in 1670, followed by The Amorous Prince (1671).

King Charles II, changed the cultural norms in England, getting rid of the puritan ethics that had been prevalent in the fashionable society of London.  Aphra Behn, became a bold proponent of sexual freedom for both women and men. Like her male contemporaries, she wrote freely about sex. In the infamous poem The Disappointment, she wrote a comic account of male impotence from a woman’s perspective.

In all she would write and stage 19 plays, contribute to others works, and become one of the first prolific, high-profile female dramatists in Britain.  During the 1670s and 1680s she was one of the most productive playwrights in Britain, second only to John Dryden.

Of Behn’s considerable literary output, her novel Oroonoko, is seriously considered by literary scholars as her best.  Interest in it has increased since the 1970s, with critics arguing that Behn, is the foremother of British female writers, and that Oroonoko is a crucial text, published in 1688, is regarded as one of the first abolitionist and humanitarian novels published in the English language.

During her last few years, Behn’s, developed health problems and continued to be plagued by poverty and debt.  Though she continued to write, it became increasingly hard for her to hold a pen. She died on 16 April 1689 at the age of 49, and was buried in the East Cloister of Westminister Abbey.  The inscription on her tombstone reads: “Here lies a Proof that Wit can never be Defence enough against Mortality.” She was quoted as stating that she had led a “life dedicated to pleasure and poetry.”

She is remembered in Virginia Woolf’s, A Room of One’s Own “All women together ought to let flowers fall upon the tomb of Aphra Behn which is, most scandalously but rather appropriately, in Westminster Abbey, for it was she who earned them the right to speak their minds.”

Dee Jae Cox is a playwright, director and producer.

She is the Cofounder and Artistic Director of The Los Angeles Women’s Theatre Project.