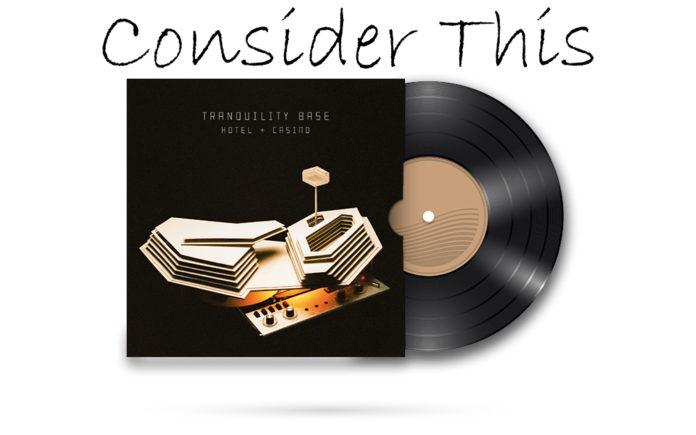 Five years is a long time between records. The music industry is constantly changing these days and fans have become more fickle (fickler?) and less loyal in this culture of instant gratification. It feels so half-century ago to be counting the days for the long-awaited Fleetwood Mac or Led Zeppelin record when Cardi B and Post Malone are releasing downloadable singles at a furious clip. But, it seems like if anyone could weather a lengthy absence and emerge with their fans intact it would be Arctic Monkeys.

The British four-piece formed in High Green, a suburb of Sheffield England in 2002. A year earlier front-man Alex Turner and rhythm guitarist Jamie Cook received guitars for Christmas. They quickly connected with drummer Matt Helders and bassist Andy Nicholson. Not long after, they were uploading nascent compositions on Myspace (ahh, Myspace!). A fierce bidding-war broke out between large and independent record labels, but the lads chose to sign with Domino Records. (The indominable Indie has been home to the Feelies, Neutral Milk Hotel and Superchunk).

When their debut, Whatever People Say I Am, That’s What I’m Not burst on the scene in 2006, it built off the pure Punk energy exhibited by other 21st century bands like Clinic and the Libertines. Attempting to perform CPR on the moldering corpse of Punk Rock, they succeeded in channeling the explosive fury and snarly intensity that the Sex Pistols and Clash displayed three decades earlier.

Not only did Whatever… debut at #1 on the British charts, it was the fastest selling inaugural release since Oasis’ Definitely Maybe album in 1994. Even though Andy Nicholson amicably left the band and was replaced by bassist Nick O’Malley, the band suffered no growing pains on their second effort, Favorite Worst Nightmare. Released in 2007, it doubled down on the winning formula of the first album, only faster and louder.

For 2009’s Humbug the band traded the metropolitan grit of London For the arid, desolate landscape of Joshua Tree. Taking a jagged left turn they tapped QOTSA front-man Josh Homme to co-produce, and multi-instrumentalist and Renaissance man Alain Johannes to engineer. Shifting gears from the combustible economy of Punk, their sound became more expansive and opaque. The gamble paid off, raising the band’s profile in America. For their fourth album, provocatively entitled Suck It And See, the band returned to their Steel City roots.

Two years later the band relocated to Los Angeles, and it was there and Joshua Tree where they wrote and recorded A.M. Expanding their sonic palette exponentially, Arctic Monkeys layered Glitter/Glam, Psychedelia, Blues, Desert Rock and R&B over their Punk Rock foundation. Influences ranged from Black Sabbath and “Ziggy” era Bowie to Outkast and Aaliyah. Critical acclaim was unanimous and their popularity skyrocketed, A.M topped the charts worldwide.

Following lengthy world tours, the band went on hiatus in late 2014. During the interim Alex Turner recorded a second album with his side project, The Last Shadow Puppets, and Matt Helders played drums on Iggy Pop’s 2016 album, Post Pop Depression. In early 2017 the Monkeys reconvened in Los Angeles to listen to Alex’s home studio demos. After a bit of woodshedding, they returned to London to lay down tracks and the result is their sixth album, Tranquility Base Hotel + Casino.

If longtime fans are expecting the band’s stripped-down guitar Punk, or even the Glam-tastic Soul of A.M. they are in for a rude awakening. The first three tracks set the tone for this record. “Star Treatment” opens this 11 song set with stuttery drums, cocktail Jazz piano, bloopy synths and practically non-existent guitars. The melody simply plods along as Turner adopts a deadpan manner speaking, rather than singing non-sequiturs like “Maybe I was a little too wild in the ‘70s, rocket-ship grease down the cracks of my knuckles, karate bandana warp speed chic/Hair down to there, impressive moustache, love came in a bottle with a twist-off cap, let’s all have a swig and do a hot lap.” Um..huh?

The soporific “One Point…” folds into “American Sports.” As twinkly synth recede and time signatures shift. The guitars are wobbly and exiguous, although they briefly flare and fuzz on the instrumental break. Jabberwocky lyrics touch briefly on “battleground states,” “most muscular regrets,” “Parliament brawls” and video chats with God.

Admittedly, the first single “Four Out Of Five,” feels slightly more engaged. The instrumentation is equal parts poppy and gritty. Menacing guitar chords wrap around a sinewy rhythm punctuated by a satisfying thwok. Self-aggrandizing couplets like “I put a taqueria on the roof, it was well reviewed, four stars out of five and that’s unheard of” mean…exactly what?

Sadly, the balance of this record feels phoned in, half-assed and perfunctory. Although it sports an ambitious title, “The World’s First Ever Monster Truck Front Flip” is a lugubrious fever dream powered by a Woodpecker rhythm, (which feels purloined from the Beach Boys’ Pet Sounds instrumental). “She Looks Like Fun” is a collection of riffs and grooves that never coalesce.

The titles of both “Science Fiction” and “Batphone” hint at Superhero whimsy, but that’s just wishful thinking. Over rippling percussion and quavery keys, the former smugly asserts “I want to make a simple point about peace and love, but in a sexy way where it’s not obvious.” Yeah, maybe next time cut the Prozac in half.

On the latter, the same cluster of synth figures unspool ad nauseum. Humble-brag lyrics like “It’s a big night in Tinsel City, life became a spectator sport/I launch my fragrance called ‘Integrity,’ I sell the fact that I can’t be bought,” is simply Hipster horseshit. The musical equivalent of a man-bun.

The album closes with “The Ultra Cheese.” The title feels wholly apropos for this abysmal outing. The song is a Morrissey-esque pastiche in ¾ time. Expansive piano runs, lonesome pedal steel and stately Wurlitzer fills can’t camouflage the fact that there’s no there there.

If this was another band member side project, it could easily be viewed as an interesting experiment. But billing it as an Arctic Monkeys record is almost like false advertising.

This record feels chilly and dystopian, maybe it’s a reflection of the times. But where are the hooks? Where are the choruses? It’s just verse after verse with no sweet respite. Tranquility Base Hotel + Casino is a glaring mis-step. 12 years ago, shit, five years ago, this band had swagger. Now the Arctic Monkeys seem smug and complacent. It’s not a good look.