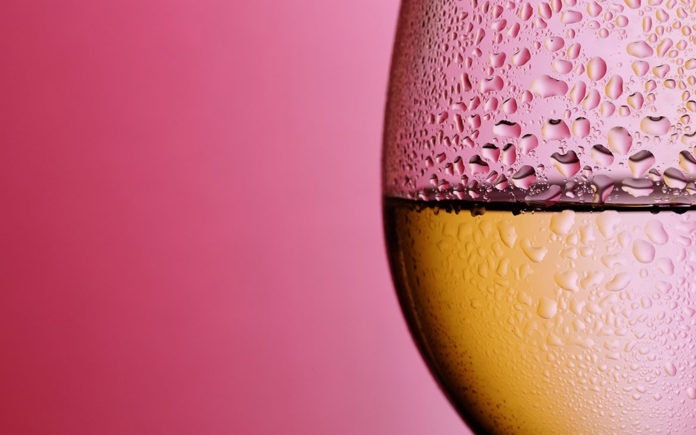 As I’m writing this piece, over half the country is experiencing more than 90 degree temperatures.  And the summer season has barely begun! Just as we humans are feeling the heat—so too the grapes. To answer the title question above with another question: What do you think?  Yep!—it’s bad news.

We’ve all studied world geology and geography and we know that the climate has always been changing.  But the changes have been on a geological timescale. Major changes took place over millennia.  Today is different as we’re experiencing changes on a scale of 100 years. That’s a completely different thing and relatively speaking—it’s quite sudden.

I don’t think anyone is totally denying that the world climate is experiencing change as we’re seeing a continual rise in average temperatures for the past 10 years.  We’re sadly watching the glaciers melt in the north; we’ve seen ice acreage in square miles separate from Antarctica.  I’m personally convinced that CO2 emissions from the last 150 years of technological profitable living are in on the blame, but whether we all think so or not, the heat is here and things are getting hotter.

Generally speaking, what hot weather brings are early grape harvests because the grapes ripen faster. This means the grape’s lovely lifetime on the vine is affected, and oftentimes diminishes the wine quality due to a change is the grape’s customary sugar, acid, phenol, and tannin content.  And that could translate to a change in an expected taste of your favorite wine.  Sure, winemakers can adapt to maintain the flavors they are known for—but for how long?

Historically though, warm weather—especially in the cold regions of Europe, was very good news.  Sometimes, back in the day, vintners had to add a bit of sugar to bolster the sour grapes of minimal sunlight.  Indeed, it was the few select warm summers in the 50s, 60s, and 70s that made a Bordeaux classically delicious.  But for many of the years in those decades, Bordeaux was a bit tart, particularly for American palates.

And to boot, climate change has benefited French vineyards since the 1980s.  Burgundy, Bordeaux, the Loire and the Rhône Valleys and other regions have all gone on to provide rich and complex vintages that have been a wine collector’s dream. Heat was very, very good for France.  But a recent 2016 study warned that these advantages may not last for much longer, as temperatures keep rising. (We remember the disastrous 2003 month long heat spell that killed over 13,000 Frenchmen—not to sound flippant, but that was a bad sign.)

In California, we were witnesses of the major drought—the driest four year period on record that worked serendipitous to the vineyards in Napa/Sonoma.  Stupendous Cabernet Sauvs and Chardonnays have been coming out every year since 2012 as the vines were loving the heat but were taking down the water line.  Thank God the rains and snow showed up in 2016, rescuing the vines from a dry gulch future.

Wine gurus and climatologists have sat down to review their stats. And it looks like global warming will drastically alter the world wine map. The NGO Conservation International has recently published in the journal Proceedings of the National Academy of Sciences.  This is the scenario they write:

“Temperatures are expected to rise on the average from 3° to 5°F by 2050, An increase of 1.8° F in average daily temperatures over the next 30 years, accompanied by a decrease in summertime precipitation, much more frequent heat waves over 95° that are fatal to grapevines, increased soil erosion and irrigation problems. This catastrophic scenario for an entire economy is a reality. Tomorrow’s wines may no longer taste the same, with certain grands crus having completely lost their current typicity, and the reshuffling of the winemaking cards may prove a fatal blow for certain regions, including southern Europe, France and California.” Ughh! 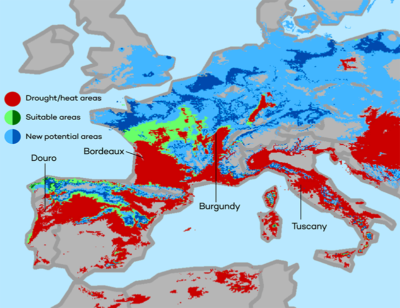 Right now I’m viewing the proposed 2050 wine world map.  The projection is a bit over 30 years away.  Looking back in time… that would be 1988.  Man!—what drastic sudden changes are in view in just thirty years!  Checking in on Europe, we see all of Sicily, big parts of Spain, and major areas of Italy and France all out of sorts with their traditional vineyards full of heat.

You’ve heard of Randall Grahm, one of the original “Rhône Rangers” (Bonny Doon Vineyard) who’s planted warm weather Rhône varietals in Northern and in Central California since the 1980s.  He is still hands-on in the vineyards and knows climate first hand.  “We harvest now throughout Northern California three to four weeks earlier than we ever used to,” Grahm grimly states. “It’s everywhere. Burgundy may be screwed. The northern Rhône Valley is partly screwed, though many of the great vineyards face away from the sun. The southern Rhône is completely screwed. New varietals that can still produce warm-climate wines that are complex and not too alcoholic may happen only with new kinds of grapes.”

The cool loving Pinot Noir grape is at risk not only in Burgundy but in warmer California regions—and believe this, even in Oregon! For the next generation looking to get into the wine biz—well, things are looking up; up to Canada, that is: “Come and visit beautiful British Columbia—the Napa Valley of the Future!”

Yes!—the good news is that new vineyards are on the rise!  A rise in latitudes.  It used to be the 50° parallel was the limit in wine grape viability; it’s up to 55° and rising.  Right now English sparkling wines are challenging French Champagne in ratings!  Even the Queen of England now owns vineyards.  In 1988, you couldn’t get a wine grape to flourish standing in the English rain … and cold!

Cheers to the brave new world of wine!