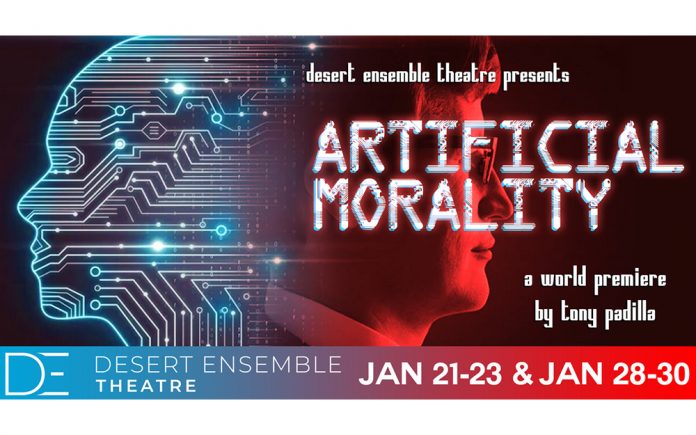 Pulitzer Prize winning Playwright Paula Vogel, once said, “We keep narrowing the definition of what a play can be. We’re losing the opportunity for someone like Samuel Beckett to spring up, because we no longer want our plays messy. But my God, sometimes we need mess. These are messy times and plays can reflect that.”

The World Premier of Tony Padilla’s new play, “Artificial Morality,” is a mess.  A creative, artistic mess and yet it strikes a nerve that lingers long after the stage is dark.  Currently in production with Desert Ensemble Theatre, the company that Padilla, himself founded in 2011, Artificial Morality, is Padilla’s eighth play. It has too much exposition, way more telling than showing and awkward staging that left me trying to recall if I’d ever had a potential employer get up from a chair and sit on the desk in the middle of the interview? But with all of that ‘mess,’ Padilla’s new play is a brilliant reflection of the times. Staging new plays is a critical must for theatres and playwrights. 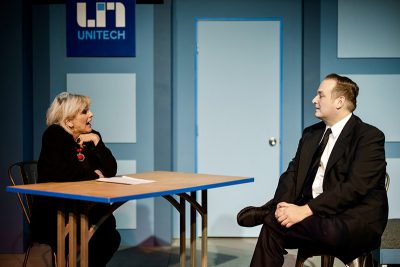 Artificial Morality, is the story of our times.  In an age of ‘fake news,’ and misinformation, selective truth and obscure realities, writer Rufus Foster, (Shawn Abramowitz,) is hired as an editor at Unitech Publishing house. Unitech is looking for an assistant editor as well as a writer that will provide them with the next great book and Foster may just be the writer to give it to them. He’s the kind of guy who isn’t afraid to do (or say) what it takes to achieve success.  But in a world where truth is just a manipulated lie, even George Orwell’s world of 1984, would be challenged to keep up.

Abramowitz, stepped into the role of Rufus Foster at the last minute, as a precaution after the actor who was originally cast, Fergus Loughnane, was exposed to Covid.  With such short notice, Abramowitz needed to be on book, but after the first few minutes, strong acting skills and talent made the paper in his hand disappear.  Rufus Foster, may not be the most likeable character, but Shawn Abramowitz’s portrayal makes it easy to understand how charm can be delusional. 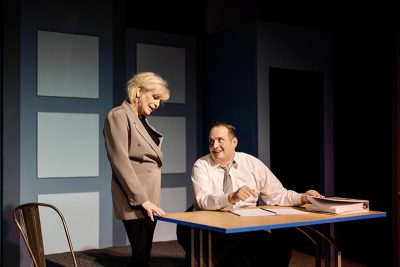 Desert Theatre League Award winning actress, Bonnie Gilgallon, is wonderful in her role as Edwina Carter, the Unitech Supervisor who is willing to justify any misrepresentations of the truth, if it means money and success for her company.  Gilgallon portrays the perfect archetype of a ‘win at any cost, as long as we make money,’ persona.

Scott Dilorenzo as Eddy Carter, is the nice guy who gets passed over for the promotion that instead went to Rufus Foster and Laura Martinez-Urrea, as Lola Lopez, the reporter who is the voice of truth and reason in a world that wants nothing to do with any of that, both do an incredible job at bringing balance and some semblance of normalcy to the twisted truth of the story. 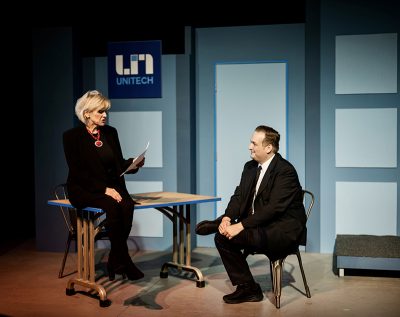 Theatre is a collaborative art.  The playwright passes the script on to the Director who hands it to the Actors.  Stephen Sondheim said; “The last collaborator is your audience … when the audience comes in, it changes the temperature of what you’ve written. Things that seem to work well — work in a sense of carry the story forward and be integral to the piece — suddenly become a little less relevant or a little less functional or a little overlong or a little overweight or a little whatever. And so you start reshaping from an audience.”

The World Premiere of a new play is exciting and transformational.  It is now in the hands of the audience.  Edward Albee, was spot on when defining a playwright. “Do you know what a playwright is? A playwright is someone who lets his guts hang out on the stage.”

Artificial Morality is running through January 30th.  For ticket and show information Contact: https://www.desertensembletheatre.org/  or call (760) 565-2476.