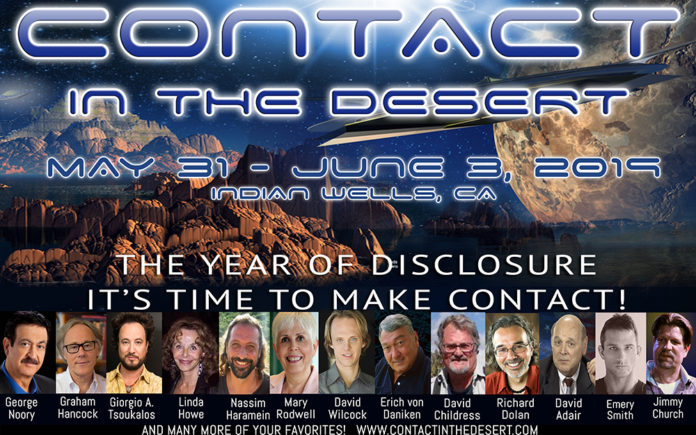 The world’s largest UFO conference, Contact in the Desert (CITD), returns for its 7th year on May 31-June 3, 2019 in Indian Wells, California. The most comprehensive lineup of experts ever assembled will lecture on the latest developments in UFO studies, government disclosure, ancient civilizations, crop circles, and more. The event grows exponentially every year, with attendees from all over the globe gathering for panel discussions, workshops, film screenings, speaker meet & greets, night sky gazing, and tours of the area’s historic UFO sites. Contact in the Desert 2019 will be held at the Renaissance Indian Wells Resort & Spa and is expected to surpass 7,000 participants.

Hot topics at Contact in the Desert will include the controversial interstellar object Oumuamua,  which was analyzed by the Astrophysics Department at Harvard University; the Department of Defense Advanced Aerospace Threat Identification Program, discoveries in geothermal caverns in Antarctica; and a panel on History Channel’s new hit series, Project Blue Book. The conference offers 57 lectures, 42 workshops, 8 panels, 3 “conversations with,” and 14 intensives.

The desert of southern California has a long history of ufology, and featured documentary Calling All Earthlings explores the Integratron, one most famous sites in the area, which also may be seen during one of several off-site tours offered as an add-on to the weekend pass.

Advance prices on the weekend passes are $260 single, $470 double. Meal plans are also available, and some events have additional fees.  For more information see http://contactinthedesert.com/tickets/passes.

Forbes Magazine named the Contact In The Desert as one of ‘The World’s 8 Best Places to Search For UFOs’, and USA Today calls it “The Woodstock of UFOs.” The conference is the most important educational gathering of its kind, at a time when “the need to know” is stronger than ever.