If you haven’t yet had the privilege to check out an Avenida show, you have been missing out on one of the best all-around cover bands, period. From modern rock to country to disco Spanish rock, and a repertoire of hundreds of songs, Avenida can do it all and make it look easy. That is partially because, brothers, Samuel, Vincent and Josiah Gonzales have been playing music together since childhood.

Growing up in church, the sons of a pastor, learning and playing music was just a part of life. I had a chance to chat with keyboard player, Josiah Gonzalez about the band’s origins, where they are headed and their ultimate mission which is to raise funds and awareness for people with disabilities and Desert Arc.

Gonzales: My brothers and I have been playing music together for over 15 years.The first time we played was a little show we put together for our Aunt’s birthday. It went so well that we kept jamming. We were basically a little garage rock band. We eventually started getting little gigs at places like Schmidy’s Tavern, and a couple of years ago we decided we wanted to make what we were doing more lucrative. After going through something like 3 or 4 different drummers, we added Sean Poe about a year and a half ago and it all blended into where we are today.

CVW: Your diversity as musicians is part of what makes you guys so marketable for just about any occasion. How have you guys built up such a huge set list of songs from so many genres?

Gonzales: We practice every week and each week we aim to add 4 or 5 songs to our repertoire so eventually we can have a catalog of 400-500 or so songs to pick from at any time. We have a system in place that has taken us a while to establish and it’s working for us. We have learned from others and are trying to emulate those who we have seen that are doing this well.

CVW: So, it’s been well established that Avenida is the go-to band for any crowd or occasion. Besides private events, where can somebody catch an Avenida show?

Gonzales: We have a couple of residencies now. Our main one is at the Hyatt in Indian Wells on Friday nights and we have been playing Big Rock Pub more lately as well as some of the smaller venues in the desert. That said, we have really spread out doing weddings, corporate events, etc throughout places like San Diego, OC and all over Southern California in general. We are also looking forward to playing the 60th Anniversary Party for Desert Arc.

CVW: Let’s talk about the special connection that Avenida has with Desert Arc. 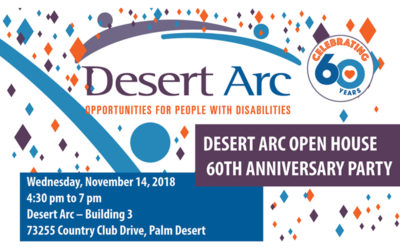 Gonzales: I guess it started with my dad who bartered services such as landscaping in order to be able to pay for our music lessons. I will never forget him telling us that he is not doing all of that for us to keep our musical abilities to ourselves. He said that what we learn needs to be a blessing to others. With that inspiration, our main goal is to be able to give back to those in need. That is why we donate a percentage of everything we make to Desert Arc to help fund music and art programs for people with disabilities in the Coachella Valley.

CVW: Is it true that you work for Desert Arc as well?

Gonzales: My brother Vince and I do work for Desert Arc. My brother Sam works with kids with disabilities at the High School and our drummer, Sean Poe also works with people in the spectrum. So yeah, all of us work with people with disabilities in some way. Desert Arc is one of the oldest NPOs in the valley and 2019 marks its 60th year serving people all from Cabazon, to the high desert and all the way out to Blythe. We started in 1959 and offer a wide variety of services to over 700 people. This is a time for us to reflect on where we have been, what we have done and where we are going.

To learn more about Avenida and find out when and where to catch them live: