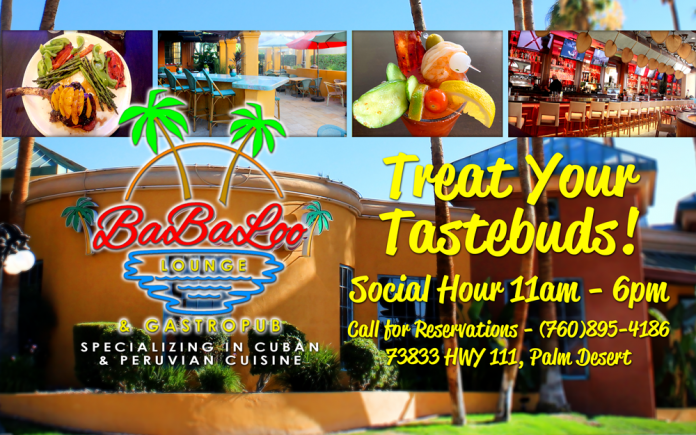 Family owned and operated since 2019, the Palm Desert location of BaBaLoo Lounge and Gastropub is the 2nd location opened after the success of their original location in Lake Havasu, Az.

I visited BaBaLoo recently for the first time with my buddies, Nick and Phil who were also first timers to this establishment. To say that none of us left disappointed is an understatement. In fact, the three of us agreed that everything we experienced at BaBaLoo, from the service and ambiance to the food and cocktails was top-notch in a way that was beyond what we could have conceived of. Lucky for us, we showed up with open minds and adventurous attitudes and those attributes served us well at this exotically diverse restaurant.

Don’t get me wrong…I don’t want to discourage picky eaters or folks that tend to shy away from trying out new culinary experiences from checking out BaBaLoo. As exciting and curious some items might seem to many diners, the menu is actually quite well rounded with items such as stylized burgers, sandwiches, stir fry’s and steaks. The indoor bar is not only stunning to look at but it is extensively stocked with countless liquor options, wines and draft beers. There is also a really cool bar on the back patio which has an awesome little koi pond and a misting system that works so well that I wouldn’t mind sitting out there in the heat of July.

Thirsty upon our arrival and stunned by the gorgeous and alluring bar setup in the main dining room, we ordered cocktails right away. Hector, our server made some suggestions and we decided to all try something different for comparisons. Each cocktail was artfully crafted by Ian the bartender who took time and care in skillfully executing each libation with perfect balance. Not too sweet, not too strong and full of flavor. Eventually, I asked Ian what the secret was behind mixing the most delicious mojito I ever had the pleasure of tasting and he replied that they use, “… all fresh ingredients.”

Next, we ordered our appetizers and this is when it got interesting. Phil, Nick and I made the group decision to try things we have never had before which led to us ordering gator bites, frog legs, escargot and fried duck wings in a peanut butter sauce with a guava Sirach jam. Let me tell you guys that our adventurous spirits paid off with our choices. Any preconceived notions or hesitations we may have held about those dishes were quickly dissipated due to delectable execution of each appetizer we tried.

The gator bites, (yes I mean alligator), were breaded and deep fried nuggets that packed in a lot of flavor and were served with a spicy aioli dipping sauce that added just the right kick of spice without overpowering the taste of the meat. We joked that it is the type of dish you could serve to a picky child and they would never conceive of the fact that they were eating alligator meat. Our next surprise was the escargot.

As three newbies to the concept of eating snails, we were definitely on the edge of our seats with skepticism. I kept thinking of the dinner scene in Pretty Woman where Julia Roberts is served a plate full of gray, slippery shells that she is awkwardly trying to negotiate with specialized tools and ends up accidentally flinging one across the room. “Slippery little suckers.” But this dish was nothing like that. It wasn’t slimy or rubbery or even in a shell. On the contrary, it was savory and balanced with the texture that I would compare to perfectly sautéed mushrooms in an aromatic, garlic and butter sauce.

That would lead us to the frog legs that were crispy on the outside, tender and juicy on the inside with simple but perfectly applied seasoning and served with a light Asian inspired sauce. The last of our appetizers was the fried duck wings in a peanut butter sauce which was beyond delicious but also, really difficult to describe. The balance of flavors in the sauces on top of the most perfectly prepared duck wing I have ever had is something you just have to try for yourself.

For our entrees we ordered swordfish, a humongous rib-eye steak and a classic Cuban sandwich. To save us all a lot of time and fanfare I will just go ahead and say that every dish was perfect and probably the most delicious example of each dish that we have ever had, period.

In addition to phenomenal food, drinks, service and ambiance…BaBaLoo has live music and dancing every weekend, daily happy hour specials and a brand new Sunday brunch every week from .