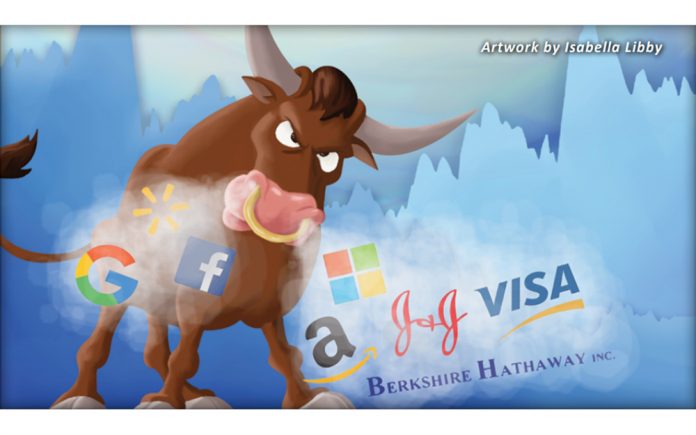 When we hear about companies like Microsoft and Apple being worth more than $1 trillion dollars, it takes a bit to get your head around a number of that size.  $1 trillion would pay every person on Earth $125.  You can buy 2 million $500,000 homes with $1 trillion.

The value of all publicly-traded companies in the world totals approximately $75 trillion with the United States-based companies worth roughly $45 trillion.

The ten largest public companies in the world equate to 10% of the value of the market.  Here in the United States, our ten most valuable companies represent 17% of market capitalization.

When we see the stock market going up in a time of historic unemployment, it seems as though the equity markets are divorced from reality…which they are.  When the Federal Reserve pumped $5 trillion into the markets, they propped up a shaky bond market.  Another $3 trillion and counting was pumped into families and businesses.  By propping up the market with such force, companies that would have otherwise failed, survived this historic event.  Families that may have ended up on the street by now were given the time and money to figure out next steps.

As the world emerges from this self-induced economic coma, we may see a bifurcated recovery – one where some companies and people thrive while others struggle to survive.  Given that many businesses and governments are on shaky economic footing due to the shutdown, Central Banks are expected to keep borrowing costs at the lowest levels in the history of mankind.

As the Central Banks prop up heavily indebted governments and companies, those in thriving business sectors may experience historically good operating conditions.  The value of these ‘COVID-proof’ companies go up as they benefit from the extraordinarily low interest rates that are required for the heavily indebted to avoid bankruptcy.

As business and government try and offset the financial impact of the shutdown, it is expected that technology will be used to help in culling the middle management ranks.

A NEW NORMAL IS VIRTUALLY CERTAIN

As virtual meetings have proven effective, the need to pay for high-priced commercial real estate declines.  If companies begin distributing their workforce across the United States based on skills over employment location, we can expect a structural change in the way that large cities operate.  Any migration of jobs requires faster, more vibrant and secure communication networks.

Last week, an Australian research team logged a data speed of 44.2 terabits per second (Tbps).  For comparison, you home internet speed may get up to 100 megabits per second (Mbps) although most households are slower than that.  This record speed is a ridiculous 332,000 times better than the average broadband speed in the United States.

For comparison, Singapore has the best fixed broadband speeds in the world at 198Mbps followed by Hong Kong at 177Mbps.  Mobile speeds are best in South Korea at 88Mbps and China at 85Mbps – the United States is half that.

Areas like the Coachella Valley are inadequate for virtual workers.  At a time when government budgets are stretched to the brink, investment in infrastructure like high-speed internet will be a critical differentiator when attracting residents from an increasingly mobile workforce.

According to Broadband Now, Stealth Communications offers the fastest speeds in the United States at up to 10,000Mbps in Manhattan.  If you are keeping track at home, that speed is more than 50 times faster than the average speed for Spectrum in the Coachella Valley.  Fortunately for this region, the Coachella Valley Economic Partnership iHub offers the highest speeds in the desert at 1250Mbps, or nearly twenty times faster than the typical home service.