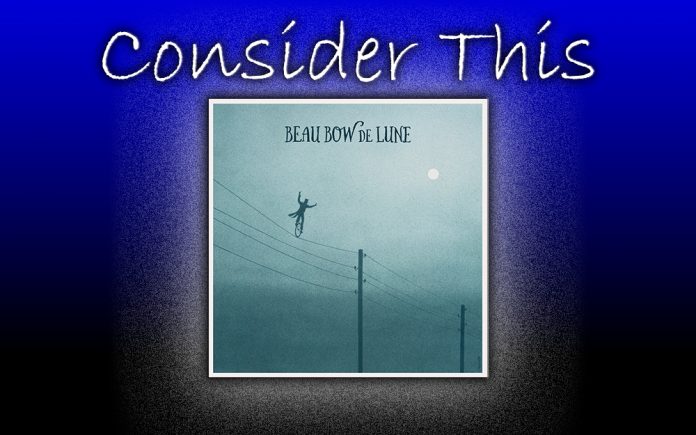 In the tradition of Crosby, Stills & Nash, Crosby, Stills, Nash & Young, Derek & The Dominoes and the Traveling Wilburys, the band Beau Bow de Lune was forged through friendship and mutual admiration. Singer-songwriter (and guitarist extraordinaire) Val McCallum is the lynchpin of this trio, having cultivated friendships and working relationships with both Vermont-based singer-songwriter Bow Thayer and producer/multi-instrumentalist and fellow L.A. denizen Greg Wells.

Val is probably the best known of the trio. He grew up part of Hollywood royalty. His British parents were well-respected actress Jill Ireland and David McCallum, the latter was part of the iconic ‘60s TV series “The Man From U.N.C.L.E,” these days he’s best known as “Ducky” from the long-running “NCIS” series. His stepdad was Action superstar Charles Bronson. It was Charles who gave young Valentine his first guitar.

Home was Los Angeles, but he, along with his older brothers also split their time at a second home in Vermont and myriad film sets. Although he had formal lessons, Val’s real musical tutelage came via classic AM radio and his record player. Almost immediately he was parsing favorite licks and riffs from guitar heroes like Chuck Berry, Keith Richards and Jimi Hendrix, as he moved the stylus back and forth across vinyl.

By age 18, he got his start playing guitar on a Harry Nilsson album. From then on, he earned his keep as an in-demand session musician, playing on records by everyone from Randy Newman, Sheryl Crow, Shelby Lynne, Willie Nelson, Bonnie Raitt, Lucinda Williams and the Wallflowers. Concurrently, he spent decades out on the road as lead guitarist in Jackson Browne’s touring band. As a lark he formed Jackshit, a three-piece band that includes bassist Davy Faragher and drummer Pete Thomas (best known as the rhythm section of Elvis Costello’s longtime backing band, The Imposters). Like a Bakersfield version of the Wilburys, they adopted brotherly alias.’ Val became Beau Shit, Davy is Shorty Shit and Pete is, well, he’s Pete Shit. Legendary gigs around L.A. followed, along with three albums.

Val has had endured his share of tragedy. In 1989, his revered older brother Jason died from a drug overdose, and a year later his mom lost her lengthy battle with cancer and passed away. Some of that life experience has worked its way into his stellar solo albums, 2012’s End Of The Day and 2019’s Chateauguay. The latter is named for the woodland behind his Vermont home.

Bow, (ne’ William Bowman Thayer) has been making music for more than 30 years. The Massachusetts native and Vermont resident made a name for himself playing in bands like Seven League Boots, Elbow And Jethro, The Benders and Bow Thayer And The Perfect Trainwreck. He’s also recorded with Levon Helm, Marco Benevento and Tracy Bonham. He plays a customized resonator/banjo/guitar dubbed the Bojotar and he has released myriad solo efforts. He and Val connected in Vermont, and he ended up co-writing a couple songs on Chateauguay.

Greg Wells isn’t just a Grammy winning producer, the Ontario, Canada native is also a multi-instrumentalist who taught himself to play drums at the tender age of three. Not long after his grandmother’s piano lessons took hold, he was toggling between Bach, Beethoven and Boogie-Woogie. A fixture on the Los Angeles music scene since 1990, he has worked a laundry list of superstars including Adele, John Legend, Pink and Taylor Swift. He and Val first connected when their kids attended the same school. Just as the pandemic was heading into lockdown last Spring, Val was getting ready to make a third solo album. Since Bow had contributed to the last one, it seemed only natural that they continue to collaborate. Being nearly a continent apart, technology played its part. Val would figure out melodies and guitar parts, sending them through the interwebs, and Bow would provide the lyrics. It began to feel less and less like a solo endeavor so Val roped in Greg, who added drums and keys. The pair co-produced the album together from the confines of their separate home studios. Somewhere along the line they arrived at the moniker Beau Bow de Lune. As Val tells it, “my alter-ego is Beau Shit, so we have Beau and Bow Thayer… and Greg just got stuck with ‘de Lune’.”

Their self-titled debut opens with the one-two punch of “Reverence-Al Green Dream” and “Simple Isn’t Easy, Easy Isn’t Simple.” The opening cut is an irresistible slice of AM ‘70s sunshine. Shang-a-lang electric guitars connect with prowling bass lines and a walloping backbeat. Val stacks his harmonies Beach Boy-style as lyrics offer a sharp encomium to sanctified Soul giant, the Reverend Al Green; “Flash me back to the record shack, where the curve of the earth ain’t got nuthin’ on that hot wax…it’s all in the lesson, you taught me Mr. Reverend, I must confess my soul’s been blessed and it’s true, cause of you.” Val unspools a stinging solo on the break, cresting over slinky a Hi Records/South Memphis groove.

On “Simple..” ringing acoustic arpeggios flutter atop flickering electric riffs, bookended by twinkly keys, nimble bass and a propulsive rhythm. The soaring melody and willowy arrangement are equal parts angelic and anthemic. The lyrics attempt to unpack life’s vagaries; “It should be a breeze, but simple isn’t easy, it simply isn’t easy to heal and ease the aching bones it simply ain’t that easy to atone.” As the song winds down, beatific Beau vocals partner with growly guitars, executing a wily pas de deux.

A common thread that weaves through all of Val’s albums is the melodies feel fresh and familiar at the same time. That tradition continues with Beau Bow de Lune. Take “How Does This Thing End,” a heady concoction that blends braided acoustic chords and searing electric riffs with boomeranging bass and a chunky, tribal backbeat. The urgent arrangement matches ambitious and enigmatic lyrics that seem to address our collective lockdown ennui; “Stuck in a vicious square, the corners are overbearing, Daddy’s got the bends, how does this end?” Guitars squawk and notes bend and twist, mirroring the lyrics’ pretzel logic, supplanted on the outro with some glassy acoustic licks.

“Brush Strokes” finds the boys easing into their impending AARP twilight by displaying a sense of humor and humility. Jangly acoustic riff-age is paired with keening electric runs and a chugging beat. Admitting “I might be beat up and haggard as hell, but I guess it’s my look, so I’ll wear it well/And I’m getting really good at growing old, got the everlasting passion down in my soul,” crankily and comically comes to terms with the inevitability of the aging process. Deft guitar notes signal the shift from physical agility to mental acuity. As the expansive arrangement kicks into overdrive, guitars wax and wane as Val impishly quotes the distinguished Mr. Bronson’s thoughts on aging gracefully; “It’s like my Dad used to say, ‘it ain’t for pussies.’”

Meanwhile, “No Trouble In The Bubble” is an oblique plea for understanding. The melody shares some musical DNA with Bob Welch’s ‘70s classic, “Sentimental Lady,” and the vocal mix is a Beau Y Bow extravaganza. The pair trade verses over Bluesy, bottleneck guitar, angular bass lines, gentle keys and a sly, shuffle rhythm. Contemplative lyrics like “If you listen to the wind, you’ll hear a voice from deep within/It’s talking ‘bout that humankind/When all is one and one will shine and I believe there ain’t no trouble in the bubble, I believe it, I believe it’s time,” speak to the country’s divisive climate. Incendiary guitars flicker on the edge of burnished harmonies as the song quietly powers down.

The mood lightens on both “Funky New Thing” and “Escape Back To Babe’s Bar.” The former is a rambunctious shit-kicker that turns the 12-Bar Blues on its head. Slash and burn guitars collide with lithe bass lines and crackling backbeat. Although the lyrics disdain new-fangled technology; “I can’t find the timeless sense of design, just plastic pieces punched out on production lines,” internal engines rally and rev for something new and exotic; “Call it what you want, it’s just what I needed, she’s cut me and I’m bleeding and I’m feeling that sting, it’s a funky new thing.” Val unleashes a volley of acrobatic riffs on the break that squall, sting and duck-walk, the action accelerates wilder and faster until the fade.

The latter is a riotous barn-burner, anchored by a scrappy, stompy kick-drum beat, crunchy carnival keys, loose-limbed bass and sprawling, spiraling guitar. The lyrics yearn to return to a dive-bar that has become a refuge from the world at large; “Take me back to the place where we can be whoever we choose to be, we can be safe and free, come on take me, really take me/Ahh, back to Babe’s Bar, all’s welcome no questions, a shelter, a haven, an arcade of salvation.” Prickly guitars on the bridge give way to a whizbang solo on the break. The song echoes the freewheeling flair of the late, great one-man band, Harry Nilsson.

Other interesting tracks include the peaceful, easy benediction of “Open And Endless,” as well as the pensive “Seeing Trails.” The album closes on an ambitious note with “Are You Aware.” The instrumentation remains lean, essentially Val armed with an arsenal of acoustic guitars. But he manages to coax a series of complex chord changes that shapeshift throughout the knotty melody. This lyrical tone-poem searches for solutions; “I won’t pretend to know the answers, or sound the bell for a long celebration/And wander through this simulation of thoughts untrue to a new situation/What sparks the dreams of this collective, who train for love and rise above limitations to be aware.” Wordless harmonies and sparkly electric guitars flutter briefly before fading into the ether.

Unlike the laissez faire music created under the Jackshit moniker, Val has indicated Beau, Bow de Lune hews closer to a Steely Dan paradigm. Meaning it’s more of a studio-type situation, less readily replicated in a live setting. Hopefully, we haven’t heard the last of BBdL. Their debut comes across as sleek and polished as haute couture, but it fits as comfortably as a well-worn jean jacket.