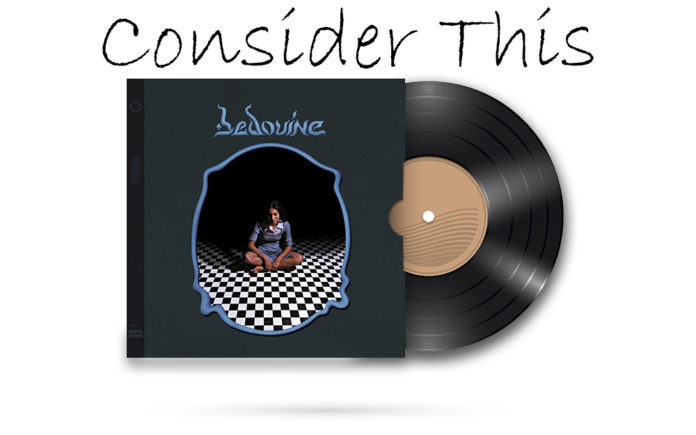 “Though I’ve enjoyed the café haze, the play it as it lays, can lives so designed be sustained” That concise couplet feels like it should have been written by a jaded Angeleno, but it comes from a song by Azniv Korkejian, who goes by the musical alias bedouine. Perfectly apropos, as it’s a distaff version of a “bedouin” another name for nomad, which until recently, easily describes bedouine’s peripatetic upbringing.

She was born in Aleppo, Syria in 1985 to Armenian parents and spent part of her childhood in Saudi, Arabia. Her father worked for a company that provided housing to Americans and expat families living and working overseas. She attended an American school, quickly became fluent in English and had a lot of American friends.

In 1995 her family won a green card lottery and immigrated to America, originally landing in Boston. Five years earlier she had begun learning piano, now she took on the trumpet. Her family migrated to Houston and as soon as Azniv came of age she moved to Los Angeles for the first time.

In the ensuing years she lived on a horse farm in Lexington, Kentucky, spent time in Austin, Texas and completed her education in Georgia, at the Savannah College Of Art And Design. Following her graduation in 2011, she relocated to Los Angeles, intent on a career in sound design as a music editor. She settled in Echo Park neighborhood. Once an ethnically diverse, densely populated, working class neighborhood east of Hollywood, it has recently become a hipster enclave.

By day, she worked as a music editor, in the evening, she would hole up in her studio apartment; her guitar and a bottle of wine were constant companions. She began composing her own songs. Huge inspiration came from Sibylle Green’s Colour Green album.

The German singer/songwriter and actress recorded the songs on reel-to-reel tape between 1970 and 1973, but abandoned her musical aspirations to concentrate on raising her family in America. At the beginning of the 21st century, her son Robby transferred the songs to CD and a copy found its way to J. Mascis, founder and front-man for Dinosaur, Jr. In 2006 the songs were collected and released on the Orange Twin label.

Azniv went in search of a portable reel-to-reel machine and that led her to Gus Seyffert. A multi-instrumentalist and production whiz, he has worked with everyone from Ryan Adams and Beck, to the Black Keys and Sia. They ended up cutting one of her songs directly to tape. Pleased with the results, they continued to record more of her music when time permitted. Between her day job and his myriad commitments they recorded 30 songs over a three year period.

Paring them down to ten tracks, they hand delivered the finished product to singer-songwriter, Matthew E. White. Along with being a musician, he had founded his own label in 2011. The venerable indie label quickly snapped her up, and her self-titled debut, bedouine, has just been released.

The record quietly unfolds with the opening track, “Nice And Quiet.” Thrumming bass lines connect with strumming acoustic guitar, piquant electric riffs and a brushstroke beat. Azniv’s warm contralto licks at the edges of the arrangement, lush and inviting. As a relationship gets sticky, she wrestles with a fight-or-flight response, before hitting on this epiphany; “After all isn’t it the fear that we face, and all the bitterness we try and erase/All of the reasons to keep me at bay, are the same reasons that I should stay.”

Several tracks navigate the rocky shoals of romance. “Dusty Eyes” is swathed in a feathery groove, languid electric guitar lattices over plangent piano notes, a tick-tock beat and a swell of strings. Slow as molasses, her vocal inflection is equal parts tentative and reflective. She weighs her options, calculating the risks and trying to intellectualize attraction; “Your dusty, your dusty eyes they leave me pale and wondering, have I swam too far this time to make it back on my own dime?” The hazy arrangement crests to a close, weaving a tapestry of strings and guitar.

On “You Kill Me,” a road trip serves as a panacea for heartache. Spare guitar, bass and keys are sweetened by pastoral strings and fluttery brass and woodwinds. She readily admits she’s over her head; “Don’t you think I know old friend, it’s not really the way things end/Typically you’re supposed to be staring right into me but something about the way you see, honey, babe, you kill me.”

The Countrified “One Of These Days” shares some musical DNA with the Starland Vocal Band’s ‘70s one-hit-wonder, “Afternoon Delight,” (but in a good way). Accented by sparkly guitar and a kick-drum beat, the sunny melody and arrangement underscores lyrics that advocate patience. “It’s true that I feel more for you than you do for me, It’s stunning how love has some delays/’Cause one of these days our love will take flight, we’ve got to get it and get it right, one of these days.”

On “Heart Takes Flight,” it feels as though she is giving herself permission to experience joy. The somber and somewhat pensive feel of the melody and instrumentation, stripped down guitar and delicate woodwinds, is belied by the cautious euphoria of lyrics like “Heart take flight, I give you every right when he’s around/ Heart take sight, don’t you forget the light he brings about.” Here her piquant phrasing echoes Joni Mitchell’s jazzy shadings and the layered harmonies recall the Roches’ dissonant sororal blend.

The best tracks here are “Back To You” and “Solitary Daughter.” The former is a breezy love/hate letter to her new hometown. Shimmery and incandescent, the irresistible melody nearly camouflages thinly veiled sarcasm like “California city parks, they talk in exclamation marks, I’m still dying to know what’s exciting.” The swoony strings, rumbling bass, rippling guitar and pulsating brass coalesce. The instrumental coda plays out like a Bacharach-ian suite.

The latter unspools like a restless manifesto. Whispery guitar darts and pivots through tremulous strings and stentorian horns. “I’m not an island, I’m a body of water,” She insists, “jeweled in the evening a solitary daughter.” Then she further asserts her independence by neatly cataloguing a list of solitary pleasures, allowing “I don’t want your pity, concern or your scorn, I’m fine by my lonesome I feel right at home.”

Other interesting songs include the cryptic “Mind’s Eye” and “Summer Cold” which offers a brittle denunciation of the conflict in Syria. The jagged melody underscores her frustration as she quietly intones “I’ve had enough of your guns and your ammunition.” The album closes with “Skyline.” Bucolic and elegant it parses a failed relationship; “I grew a garden for the both of us, it turned into weeds, dirt and dust, I tried but I knew I couldn’t stay for you.” But she still offers a glimmer of hope; “…you’re still in my skyline and I think I’m in yours.” It’s a quiescent end to a remarkable debut.

Aside from Gus Seyffert playing nearly everything, Jake Blanton tackled keys and drums, Darren Beckett and Josh Adams split the remainder of the drum duties. Guitar legend Smokey Hormel checks in for one track. Strings and woodwinds were provided by the Spacebomb Strings and the Spacebomb Horns.

bedouine’s debut is an album that sticks with you. The memorable melodies and trenchant lyrics echo antecedents like Leonard Cohen, Joni Mitchell and Nick Drake. It also conjures up more contemporary artists like Frou Frou, Hem, Laura Marling and Jasmine Rodgers.

An autumnal album, it’s the perfect companion for solitary Sunday afternoons. Azniv Korkejian pulls you in and holds you close. Making you forget, for just a little while anyway, this chaotic, complicated world.