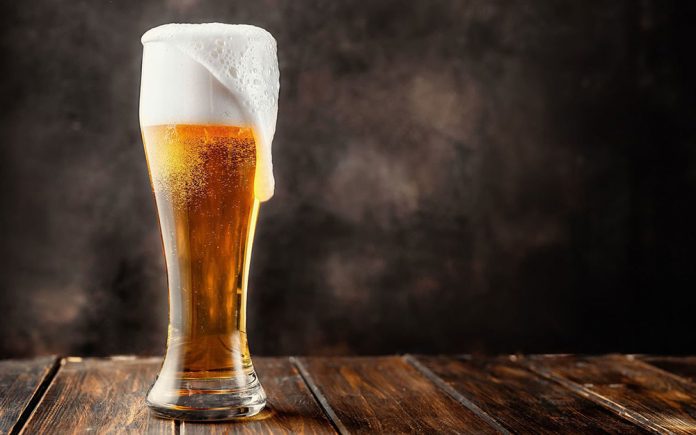 ‘Twas springtime in Michigan during my high school senior year, and a number of us would head downtown to Sandy’s Pub because a.) Sandy’s daughter Wendy, two years older than us, was hotter than a firecracker, and b.) Spring meant the release of Stroh’s Bock…a dark, beautiful pitcher of liquid refreshment. During inevitable marathon dart games, I would patiently explain that ‘Bock’ beer was the result of the brewery cleaning the ruddy, foreboding brew from the bottoms of their tanks at the end of the year…and I couldn’t have been more incorrect.

Fast-forward a few decades and here I am in the desert where Coachella Valley boasts some of the savviest food and beverage consumers in the nation. They are quick to point out that boasting of “Natural Ingredients” on a package doesn’t mean it’s healthier and adding the Fat Free symbol to a box won’t guarantee weight loss. But when it comes to beer, denizens of our lowland have been heard to utter many a discouraging word about beer. It seems we all have had something in common at one point or another.

Beer, especially the Craft segment, is rife with falsehoods and misunderstandings and I totally understand the confusion and refuse to even try to hold anyone or anything wholly responsible. It is, however, time to clear the air of some of the bigger falsehoods plaguing the beer industry, so here we go.

Believe it or not, that jet-black glass of Guinness has the same alcohol content (4.2% ABV) as Bud Light, Coors Light, or ULTRA. The color of a beer is determined by the different types and amounts of roasted malt selected by the brewer and has absolutely no bearing on the actual alcohol content.

There is a very exciting category known as Belgian Golden Ale, and how could that title not sound just like fizzy yellow fun? The beers are yellow to medium gold in color and contain copious amounts of carbonation making them spritzy and delightful…so what could possibly go wrong? Well, despite their innocent looks, they are actually quite high in alcohol, beginning at 7.0% and going as high as double digits. Don’t worry though, the Belgian brewers have their own way of warning you about these wolves in sheep’s clothing as most are aptly given names such as Duvel (Devil), Lucifer, Delirium Tremons, and Horny Devil are a few that come to mind.

Beer does get skunked, and few things are worse than removing the cap from a bottle in anticipation of some thirst-quenching suds only to be greeted by the beery equivalent of Pepé Le Pew. Skunked beer is not hard to identify, but it’s a very bitter pill to attempt to swallow.

In truth, the musky aroma is caused by a chemical reaction when hop compounds in beer react with ultraviolet light. Without nerding out too much, this chemical reaction produces 3-MBT, the same compound as our friend Pepé. As it turns out, people are remarkably sensitive to this as well; only four parts-per-trillion will make it noticeable and 12 parts will render your beverage virtually undrinkable.

Want to avoid this smelly issue altogether? Simply choose to drink draft beer or beer from cans as both packages eliminate the chance of sunlight turning your beer into a light-struck mess. Should you insist on still remaining a bottle-baby, select beer packaged in brown glass only, as brown glass reduces ultraviolet penetration by 80-90%. Green glass has about 50% protection and clear provides absolutely none. Therefore, thing of brown bottles as sunscreen for your beer.

This begs the question, “Why would a brewer choose green or clear glass?” and the simplified answer is tradition. During the 1800’s it was discovered that glass containers were the best material for keeping beer fresh for longer periods. Over time, brewers also discovered that clear glass left in the sun soured the beer and began experimenting with differing hues. During World War II, there was a critical shortage of brown glass so brewers returned to clear bottles with some brands opting for a more expensive green glass for additional light protection. During the 1950’s most returned to the auburn bottles, with some brands clinging to green in an effort to retain the elite status held during the war. (I’m looking at you, Heineken)

Ooof. Who hasn’t seen the Coors Light Silver Bullet hero-train streaking across the TV while magically turning a vapid desert scene into a snow-filled Rocky Mountain amusement park? Who else would have specialty cans and bottles where the Rocky Mountains on the label turn blue to indicate when your beer has reached optimal drinking temperature? (The mountains turn blue at roughly 43° Fahrenheit in case you are interested)

The irony of this myth is rooted to the surface of your tongue. The colder the liquid, the less you taste…its as if your freezing little taste buds all put on teeny-tiny parkas, scarves, and mittens. Think of it this way; we have all had leftover pizza out of the refrigerator, and in that moment of morning desperation…it tasted, well, just ok. But if you take the next slice and ‘wave it for 25 seconds, suddenly the peperoni pops, the cheese is cheesier, and the pineapple brings its sweetness for all it is worth. (Please don’t go judging my topping selections…I’ve seen what you do to your pies)

Truth is, taste is a very subjective matter and we all experience the same beer in different ways. A good general rule of thumb is this: Lagers are generally best experienced in the 38-48° range while Ales tend to excel from 45° all the way up to room temperature (for some styles such as Barleywine and Russian Imperial Stouts). This doesn’t mean you need to carry a thermometer with you everywhere you go like a geeky brewer/writer I know, but really, why wouldn’t you? In all seriousness, we can all tell when our beer is too warm and that is just a crying shame when it happens.

Much of this comes back to the science defining the two major categories. Lagers are fermented at a cooler temperature and mature over a longer period of time. The resulting beer is well-rounded, crisp, and clean. Since most brews taste best closest to their inherent fermentation temperature, Lagers taste better when colder. Like their White wine counterparts, Lager beers are considered to be on the refreshing side of the taste experience and there is absolutely nothing wrong with that.

Ales, on the other hand, mimic their Red wine brethren as they tend to fall into the ‘sip and savor’ category. Refreshment isn’t totally removed from the equation, but the myriad of flavors transmitted by Ales grow and change as the brew gradually warms.

What I wouldn’t give to stroll downtown to Sandy’s for a Stroh’s Bock in an effort to make reparations for the disinformation pushed by a young, naïve, budding brewer.

(When Ed Heethuis isn’t brewing at Spotlight 29 Casino for 29 Brews, you will find the Certified Cicerone® / Brewmaster out on his road bike, handicapping Canadian Football, or talking beer with the patrons at Taproom 29. He may be reached at: heethuis.ed@gmail.com or wherever beer may be found in the wild.)