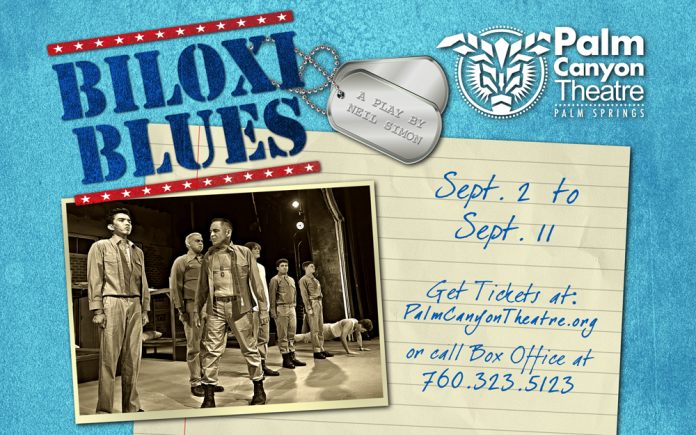 New York Times Columnist, Frank Rich, wrote: “Besides being extremely funny, Biloxi Blues is Mr. Simon’s first serious attempt to examine his conscience as an artist and a Jew.” 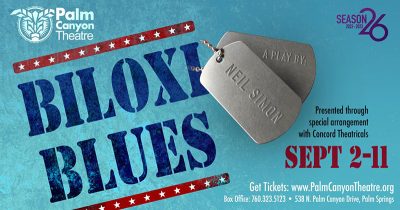 In their tradition of presenting Broadway quality productions, Palm Canyon Theatre kicks off the 2022/23 season with the Tony Award winning Neil Simon play, “Biloxi Blues.”  Opening September 2nd, this show features some of the desert’s brightest talent. Directed by Ralph Strangis. This semi-autobiographical play by the Pulitzer Prize Winning Playwright, is the second chapter in what is known as Simon’s Eugene trilogy, following “Brighton Beach Memoirs” and preceding “Broadway Bound.”

Simon, made it through a tumultuous childhood, sustained by movies and graduating high school at 16. Joining the military got him out of New York and down to Mississippi where he endured hell, otherwise known as basic Training. (As an Army Veteran I can vouch for the accuracy of this statement.)  Almost forty years later, Simon would recall his time in the service when writing Biloxi Blues, his twenty-first play. 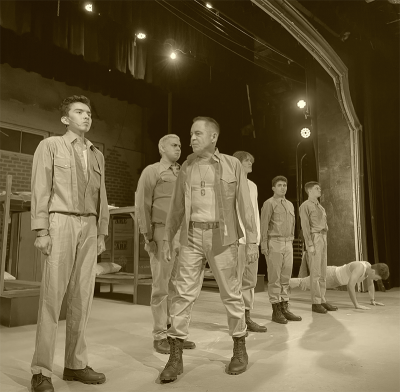 Biloxi Blues, follows a young Army recruit Eugene Morris Jerome (Fabrizio Ibanez,) Simon’s alter ego in the story, as he travels from Brooklyn to Biloxi, Mississippi for boot camp, in preparation for the front lines during World War II.  Eugene, is an aspiring writer, who likes to scribble all of his private observations into a note book. But during his time in basic, he begins to censor those observations: He rips a completed page out of the journal and throws it away. It’s then that Eugene’s best friend in the platoon, a Jewish intellectual named Arnold Epstein (Ben Van Dijk), is very blunt about saying. ”Once you start compromising your thoughts,” Arnold tells Eugene, ”you’re a candidate for mediocrity.” 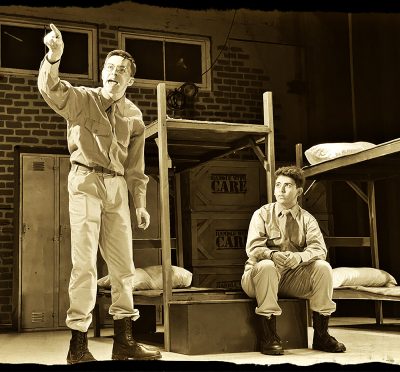 A Jewish kid from Brooklyn went off to fight the Nazi’s and in the process, found his voice. This play first opened in 1985 and even then, reflected a bygone era. I have certainly questioned if it is still relevant, especially when it comes to Simon’s portrayal of women, (as with much of Simon’s work, the female characters seem to follow the stereotypical archetypes of Mary Magdalene or the Virgin Mary.) -In Beloxi Blues it’s Rowena, a heart of gold prostitute, and Daisy Hannigan, the sweet but chaste Catholic school girl.

Yet, if you look beneath the surface of Eugene’s primary goals to become a writer, stay alive and lose his virginity, you find deeper meaning and levels in the dialogue. ”Once you start compromising your thoughts, you’re a candidate for mediocrity,” That leaves no doubt that some of Simon’s messaging and award-winning work, will stand the test of time. 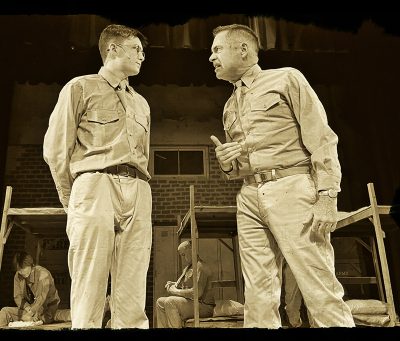 Biloxi Blues, is not just reminiscing about a bygone era, it takes a look at prejudice and how Eugene perceives prejudice. As his friend Arnold explains, Eugene is too much a naive observer, reducing other people’s dramas to neat diary entries. If Eugene is to become a real writer, he cannot forever remain ”neutral, like Switzerland.” He will have to stop making peace and jokes and start entering the battles worth fighting, whether for principle or love.  And that is what makes a show timeless and most certainly worth seeing.

Neil Simon, who died in 2018, was a multi-award-winning author, winning a Tony Award for Best Playwright (The Odd Couple), and in 1975, a special Tony Award for his overall contribution to American Theatre. He won the 1978 Golden Globe Award for Best Motion Picture Screenplay for The Goodbye Girl.  For Brighton Beach Memoirs (1983), he was awarded the New York Drama Critics’ Circle Award, followed by another Tony Award for Best Play of 1985, Biloxi Blues. In 1991, he won the Pulitzer Prize, along with the Tony Award for Lost in Yonkers (1991).  His work, some dated and some timeless, will no doubt continue to be enjoyed by audiences for generations to come. 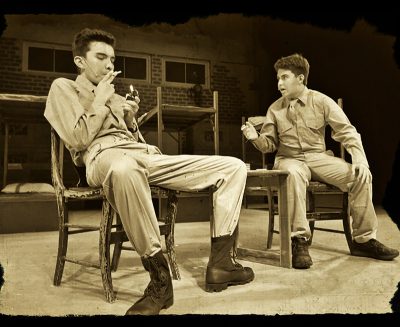