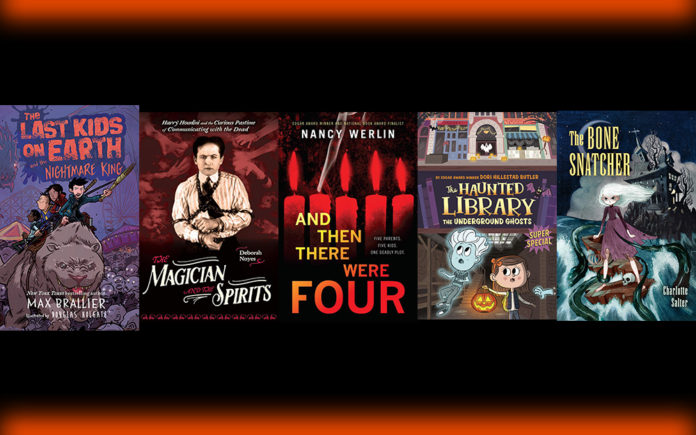 Halloween is great fun for kids of all ages.  There is something delightful about getting dressed up and freely becoming another character.  It is such a pleasure to take on a new persona even if it’s just for one night while wandering the streets in the cool darkness seeking a trick or a treat.

At an early age, we humans are oddly attracted to mysteries, the supernatural, the dark side, to strange people and places.  The Bible is filled with frightening tales.  Why do we like being afraid?   How did we come to embrace that uneasy, unsettling and disturbing feeling a scary story can viscerally trigger or release?

I am not qualified to answer such a deep psychological question.  But, I do know it starts as a kid and books provide us with, not only a catharsis, but also a sense of control.

Here are some new books for kids (and maybe their parents) to satisfy their love and intrigue of Halloween and all things creepy.

The Magician and the Spirits by Deborah Noyes – Nonfiction (Viking Books, 160 pages)

This book explores the afterlife with illusionist Harry Houdini and features vintage photographs, psychic mediums, and spiritualists at the turn of the century.  For decades, the master illusionist was preoccupied with things the eye could not see.

Houdini was determined to investigate spiritual phenomena with an open mind and to uncover the truth about the afterlife.  His quest put him in touch with some odd and fascinating characters: mediums who claimed communion with the dead, criminal hucksters, deluded scientists, and even famous figures like Sir Arthur Conan Doyle. (For grades five and up)

And Then There Were Four by Nancy Werlin – Fiction (Dial Books, 416 pages)

After a building collapses around five teenagers, they discover something strange is going on.  The unlikely group of allies comes together to save themselves when it appears their parents are plotting to have them all killed!  Bestselling author Nancy Werlin returns to her Young Adult suspense roots for this satisfying page-turning mystery. (Young Adult)

Murder, madness, and sea monsters combine in this thrilling and atmospheric story about a young girl whose parents have sold her off as a servant to pay for their passage to London.

Trapped in a decaying mansion the protagonist must uncover a secret to free herself and to keep from going mad.  This book is perfect for Neil Gaiman and Tim Burton lovers. (Grade level 5 – 9)

The Last Kids on Earth and the Nightmare King by Max Brallier – Fiction (Viking Books, 272 pages)

On the New York Times bestseller list and with more than 1 million copies of the series in print, kids have much to love and fear in this zombie, monster mash-up.

When the Nightmare King and an ancient evil won’t rest until the planet has been devoured, the last kid on earth must decide who and what his friends really are.  Wonderful illustrations keep this book fun and light. (Grade 3 to 7)

Edgar Award winning author Dori Butler gives us the 10th and final title in her not-too-scary mystery series.   When a ghost is discovered in the local library during Halloween festivities, returning characters Kaz and Claire investigate.  They discover ghostly activity in the city’s subterranean passages. (Ages 6-8)

Childhood reading takes us to places both light and dark.  Young or old, it is an easy way to examine our fears and explore our feelings of being powerless.  The best scary stories deliver new experiences, thrills and chills while providing insight into what motivates good and bad characters — even in the real world.   And, that can be terrifying.