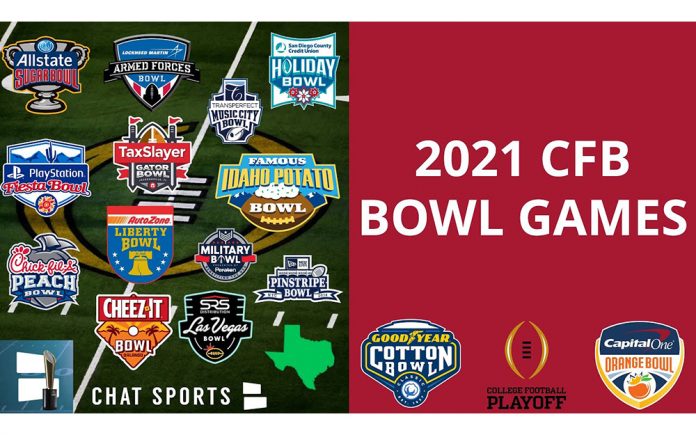 When you see the <put your name here> Bowl games this year, realize that it is part of a sporting complex that pays out over $500 million to the schools and conferences participating.

ESPN owns or has the broadcast rights to all but three games: the Holiday Bowl (Fox), the Tony the Tiger Sun Bowl on CBS (which I’m told should be great), and the Arizona Bowl by Barstool Sports.

Bowl games get started on December 17th in the Bahamas with the Middle Tennessee Blue Raiders and their middling 6-6 record playing the 7-5 Toledo Rockets.  The payout on this game is a mere $225,000.

Also on the 17th is the Tailgreeter Cure Bowl from Exploria Stadium in Orlando.  This bowl pays out roughly $600K to Northern Illinois and Coastal Carolina.  Breaking this one down a bit, Tailgreeter is an app that aims to making tailgating more accessible.  How one makes enough money from promoting tailgating is lost on me.  This bowl game is owned by ESPN, which is in turn owned by Disney.

Looking over the rest of the ESPN Bowl Series, the 18th is busy with games starting when we wake up at 8a and ending more than twelve hours later after six games have been shown on Disney’s ESPN or ABC.

After no games on Sunday the 19th, there is a bowl game every night through New Year’s Day when get five games.

The Championship semi-final games come on New Year’s Eve when #2 Michigan plays #3 Georgia in the Capital One Orange Bowl in Miami at the Hard Rock Stadium, and #1 Alabama plays #4 Cincinnati in the Goodyear Cotton Bowl Classic near Dallas.  The National Championship comes on January 10th in Indianapolis at the Lucas Oil Stadium

For those needing just one more fix before that big game, 7-5 Kansas State plays 6-6 LSU on January 4th in the Texas Bowl in Houston at NRG Stadium.

Corporate sponsors pay big money for naming rights although some seem to be more valuable than others.  For example, on the 18th, Northern Illinois plays Coastal Carolina in the RoofClaim.com Boca Raton Bowl.  The 18th also hosts late night host Jimmy Kimmel’s bowl appropriately named the Jimmy Kimmel LA Bowl at SoFi Stadium. Playing in SoFi Stadium should be an amazing experience for Eastern Michigan and Liberty and few others as few non-alums want watch these two 7-5 teams.

Truckers have their own bowl this year with the R+L Carriers New Orleans Bowl in the Mercedes-Benz Superdome in New Orleans on the 18th.  Even if the game stinks, there is always Bourbon Street.

It makes sense that the Idaho Potato Bowl is played in Albertson’s Stadium in Boise.  This game happens on the 21st when the barely bowl eligible Kent State (7-6) plays an even weaker 6-6 Wyoming team.  The only game with a weaker match-up is on Christmas Eve when a 6-6 Memphis team plays 6-7 Hawaii team in the EasyPost Hawaii Bowl in Honolulu.