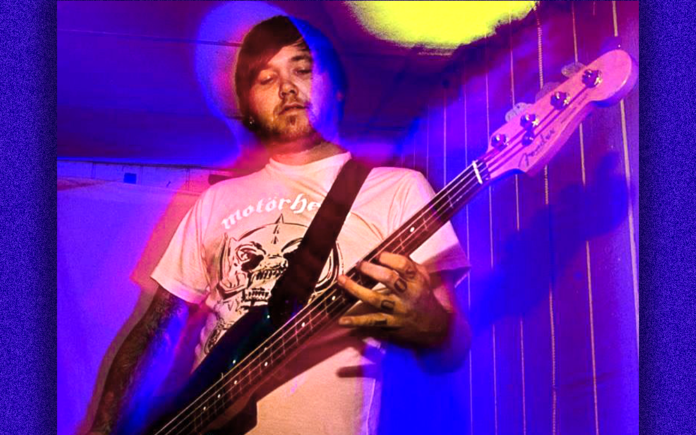 Brandon Henderson recently came off of a 2 year hiatus from playing music and is currently doing shows all over the valley with the surf band The Woodys. Most people remember Henderson from performing in such bands as The Pedestrians, Half Astro and Parosella, however, he has been a member of many more bands as you will read below.

Henderson is currently working as a Project Manager in the Corporate Audio Visual Industry and also provides Projection Mapping to enhance visuals for local artists and events, as a solid means to support his beautiful wife, Rachel, and their two adorable sons, Cody and Evan.

Henderson took some time to answer a few questions for CV Weekly.

CVW: How old were you when you started playing music and what instrument did you start with?

Henderson: “Nobody in my family played so I didn’t really have the opportunity to be around instruments growing up. When I was 12 years old I entered the 6th grade and finally had the option to join band class. I immediately chose drums but they made me wait 6 months and pick another instrument. So I played trumpet during that time. Wish I would have stuck with that. So going into high school, my parents refused to buy me a drum kit and got me a guitar instead. So I guess I became a guitar player by default. I was 15 and that’s when I really began to take music seriously and dive into serious discipline and practice.”

CVW: What was your first band?

Henderson: “When I was 17 I played bass and then guitar in a band up in Victorville that had a couple name changes: THIS SIDE UP / AGAINST ALL ODDS. We played Pop Punk Rock that was superfast and technical.  Members of that band went on to form Lorene Drive and now the singer is currently in Hollywood Undead.”

CVW: Please list all the bands you have been in?

Henderson: “Guitar: Del Padres /HeyMike!  Half Astro /Oh No Not Stereo /Brant Bjork /The Pedestrians.  Bass: Family Butcher /The Woodys /The Country /Giselle Woo & The Night Owls /Parosella. I also switched from bass to guitar in a Misfits Tribute Band called Astro Zombies. I currently play bass for The Woodys.

CVW: Is there one band that’s been your favorite to be part of?

Henderson: “Half Astro probably always felt the most like home since I was a founding member and wrote all of my own parts. Musically though, my favorite times were rocking the bass lines in Family Butcher. I easily had the most fun getting down on those bass riffs. Ultimate shred! Too bad the singer was a nightmare and we never knew when he was getting arrested next. Nice guy.”

CVW: How did you playing in The Woody’s come about? Can you share the band’s history?

Henderson: “I used to play with Alfredo in Family Butcher for a few years starting in 2008. Around 2011 he asked me to join The Woodys. That lasted for about a year. We reconnected again in early November of 2017 and he asked me to rejoin. Him and Brian Maurer started this band in 1990 and have had more than a few bass players.”

CVW: How does it feel to be performing again after a couple year hiatus?

Henderson: “It felt like one big passionless vacation to not be musically active for those 2 years. Getting out and playing live shows has been a huge breath of fresh air. I missed it something fierce.”

CVW: Your life has changed a lot over the last few years with becoming a husband and father. How has that affected you as a musician?

Henderson: “For me personally, creativity flourishes the most when I’m the least distracted. My focus for the last few years has been mainly directed towards doing my best to be a great partner to my lovely wife, raising our two little beautiful boys, and working like crazy to support all of us. I’m highly optimistic that I’ll find the time, attention span and drive to give myself to music and hopefully start hearing it in my head all day again.”

CVW: Do you write songs too?

Henderson: “That’s something I haven’t really allowed myself to harness yet. It’s been a mental battle for years… too much to type. Let’s have a drink one day and I’ll expand on that.”

CVW: You’ve been playing music for many years now. How do you feel the business has changed over the years for the better? For the worse?

Henderson: “I thought it was great to see a lot of the major record labels and executives lose their asses after too many years of capitalizing way too hard on so many artists. And now with technology and the hyper information exchange, the market is extremely over saturated. I would like to see the right artists be able to get proper advances to record great albums and make a living off of selling them. But that’s pretty much long gone. The only way to make any money these days is touring and merch. Which is easier said than done. So I guess it’s kind of like the Music Business has gotten better AND worse at the same time. Is that a thing?” Haha

CVW: What has been your favorite performance moment of your career?

Henderson: “Playing the first Tachevah Block Party with the Pedestrians in 2013 was definitely a highlight as far as energy and crowd response. Touring Europe and doing 70 shows with Brant Bjork back in 2010 though, was the first time I was in a band that toured in a bus, had an average of 500 – 800 people a night lined up around the block to get into the shows, and I got to sign a record that I performed on after every show. I never really cared about being famous.  I just always wanted to do those few things and I got to. It was a great feeling.”

Henderson: “Pappy and Harriet’s has held this spot in my heart for many years now.”

CVW: Tell us about the places you’ve toured outside CA?

Henderson: “I’ve had the opportunity to perform in about 20 states around the USA, 18 countries in Europe, and Toronto, Canada.”

CVW: Bands you listen to now?

Henderson: “I still listen to my old influences quite a bit, but some of my current go to driving tunes are from Silversun Pickups, Arcade Fire, Descendents, Queens of The Stone age, All Souls, Russian Circles, Adolescents.”

Henderson: “Ryan Greene. He produced a majority of the Fat Wreck Chords stuff I grew up being influenced by.”

CVW: Who you most respect in the music business?

Henderson: “Probably fat Mike from Nofx. He really pioneered the DIY ethic for bands and labels.”

CVW: Who would you want to see in concert that you haven’t seen yet?

Henderson: “There was a band from Canada called Choke. Pretty sure they broke up about 10 years ago. I once drove a couple hours to see them play only to show up and find out they had to cancel their tour due to a medical issue (this was before internet and cell phones were really a common thing). I can’t remember many moments that had me feeling more disappointed. So if that band ever gets back together I’ll probably fly to Canada to check them out. Both guitar players, the bass player and drummer are the best, and have the most out of the box approach to those instruments I’ve ever heard. The vocals aren’t for everyone. I would kill to see them live though.”

CVW: What band do you listen to that people would be the most surprised to hear?

CVW: What would people be the most surprised to know about you?

Henderson: “I’m not a fan of loud noises.”

CVW: What 3 headliners would you want to see at Coachella?

CVW: Which bands would you want to see under them (but not in the small letters…lol)?

CVW: What would you tell a young 18 year old Brandon about being a musician?

Henderson: “By the time this article drops we will have nothing on the books. Ask us to play your birthday party!”

Henderson: “We just play covers, so I would like to at least get a solid live recording of what The Woodys are currently throwing down at our shows. Eventually I will do my own thing…could be in the next year…could be when I’m 50.”

CVW: Where can readers go to check out your music online?

Henderson: “You gotta dig for it, man.”