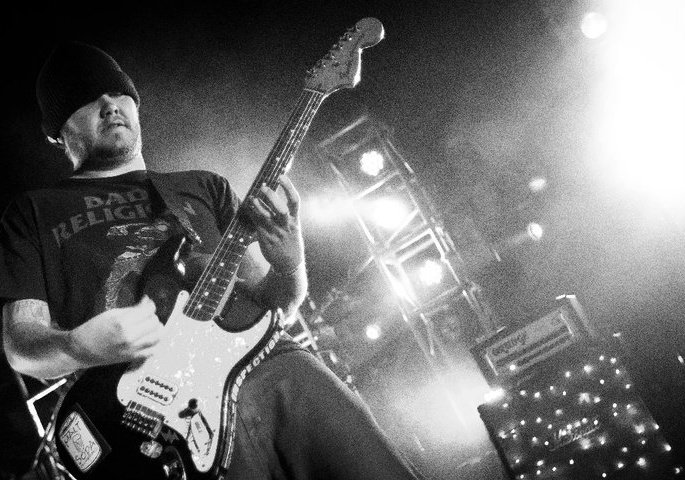 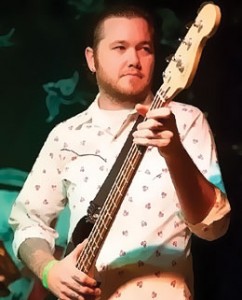 As a 6th grader Brandon Ray Henderson’s first instrument of choice was to play the drums, however the school music program made him play trumpet for 6 months before he could play them. He continued to play the snare drum through middle school. Then when he was 14 his family moved from Downey to Victorville. “That was really a drastic change moving from LA to the high desert,” insists Henderson. “It was about that time my parents got me a guitar. The school offered lessons so I took my guitar with me every day and practiced all the time. I was listening to bands like Nirvana, Guttermouth, NOFX and Bad Religion.” Henderson says he wasn’t really into applying himself in school. He just wanted to play guitar and ride his skateboard.

During high school he played in the band This Side Up.  Some of the members later went on to form the band, Lorraine Drive, but in 2002 Henderson moved to the Coachella Valley. The singer from that band, Dan Murillo, went on to become the vocalist for Hollywood Undead.

“The first band I played in here in the desert was the Del Padres with Herb Lineau, who is a desert legend of punk music,” he states. “Before I moved to the desert,  I was randomly traveling around and was in Bakersfield where I met Steven Neufeld from the band Hey Mike!. He got to play with the band Craig’s Brother from Santa Cruz. I jumped in on tour with them and called myself their guitar tech even though I really wasn’t. I basically just carried stuff around and got the tour experience.”

Then in 2004, Henderson went on tour with Hey Mike! as their actual guitar tech and then from March of 2005 to May 2006 he held the gig as their guitar player. After that he took a 6 month hiatus from playing music. “I don’t know if I just got lazy or what, but I had been out on the road driving unhealthy amounts of miles at a time not eating, sleeping on people’s floors and not making any money. Don’t get me wrong,” he insists. “I was grateful for the experience and the best part of all of it is that I got to make friends that I will have for the rest of my life.”

In January of 2007 he reconnected with Lineau and they formed Half Astro, along with Marcus Bush on drums, who Henderson refers to as his “musical soulmate” and Billy Cordell, who he refers to as a “monster on bass.” They opened for bands like Agent Orange and the Adolescents. Henderson also played with the desert punk cult band Family Butcher, with John Summers and Alfredo Hernandez, who he still performs with in the  instrumental surf rock band The Woodys.

He says that the highlight for him so far has been getting to play with Brant Bjork, the original drummer for Kyuss, who he toured Europe with. “The first time I saw Brant play was back in 2002 at what I think was the last real generator party that Jessie Hughes of EODM took me to. I saw these two guys, one was playing guitar and singing and the other was playing drums and singing and then all of the sudden they just switched and it was awesome. The other guy was Mike Johnson of The Whizards, who is one of my favorite guitar players in the desert.”

Henderson went into the studio with Bjork to record “Gods and Godesses” in  2009 and went out on tour with him in 2010 where they played 70 shows in 17 countries within 3 months.

For  a young guy in his late 20s, Henderson has had the privilege of playing with many of our desert legends, which has to say something about his bass and guitar skills. He currently plays for two different bands;  The Country, which includes members of Gram Rabbit and with Parosella, which includes band members Mike Riley, Jason Burns and Tony Gafrancesco.    Parosella will take the stage on April 14 at The Hood Bar in Palm Desert.