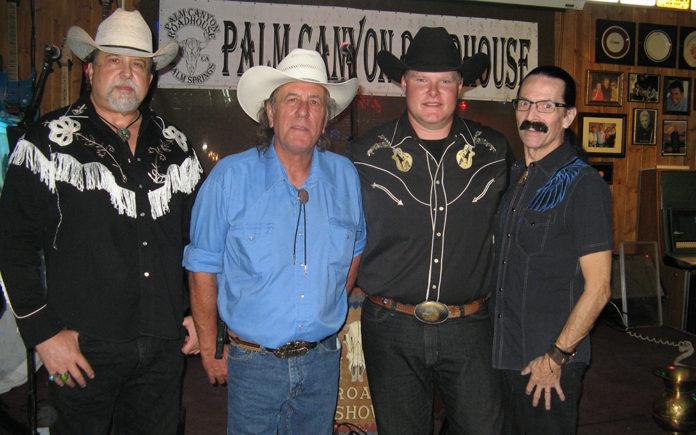 There’s nothing like some good ol’ country music coming from an enthusiastic group of talented musicians! The Buck & Bo Roadshow is just that. Up and coming, rising star, Zach Lomison aka “Bo” fronts the energetic band with his soothing deep vocals and heartfelt performance. With a growing repertoire of catchy, original music, plus a slew of popular cover songs from classic country hits, to 90’s, to today’s best, The Buck & Bo Roadshow captivates audiences. Founded by Zach as well as Josh West aka “Buck”, the band has grown to include Cris Aldrich on drums and Mike Berman on guitar, forming a strong, solid core on the stage. I spoke with Zach aka “Bo” to get the lowdown on this breakout band!

MJ: Tell me what inspires your music. What consistent themes do you find that you write about? Please share a bit about your band’s writing process.

Bo: “Our music is written as a collective, the originals that we currently have were written by our guitarist Mike Berman, Myself, Josh West aka (Buck) and my father, Todd Lomison, has also helped in the song writing process. The inspiration comes from real life experiences such as “Memories,” “Married Girl,” and “In The Valley Where I come From,” while “Just One More Day,” written by Mike, has come from more of a poetic sense. Our consistent themes seem to be (as of now) heartbreak. “Memories” deals with losing a love and seeing them wherever you go, as “Married Girl” appeals to the sense of falling for someone you can’t have. “Just One More Day” again as Mike described it, it comes from the poetic angle, where a woman comes back to the house of her past life and it is ran down and kind of junked. Then “In the Valley Where I come From,” written by Todd Lomison, Is purely about the Susquehanna Valley in which I was born and raised. No matter what though, the songs come from the heart and mean something to all of us.”

MJ: Who are some of your vocal and musical influences?

Bo: “Personally, (because I can’t speak for the whole band) my influences are great front men such as Garth Brooks, Eric Church, Dwight Yoakam, and Brantley Gilbert. These gentlemen not only make it a point to have their music appealing to an audience, they also know how to put on a show, giving the energy to the crowd, and making them feel what the song is trying to relay.”

MJ: What sets your band apart from other local bands? What can our readers expect from The Buck & Bo Roadshow at a liive performance?

Bo: “Our performance set us apart because like those amazing front men noted above, along with myself emulating them on stage, the band as a whole really gets in to it as well. Simply put, we put on a great show. We are all moving around, we all sing, but what really seems to set us apart is the range and variety of the music we play. It has the ability to hit all demographics varying in age. A little bit of old, a little bit of new, and everything in between. We have no problem jumping from Johnny Cash to Brooks and Dunn because it allows us to be diverse in our sets. I personally like to evoke a range of emotions throughout those who come to the shows. The aim is to allow individuals the opportunity to come out and have a good time, but also forget about life for the three to four hours while we are on stage. The readers can expect a great show with a wide variety of great dancing tunes, old and new, ranging from slow dances to the rip roaring honkey tonk style to get the crowd up and moving. We also love to talk to the crowd so if you do come out, don’t be afraid to come and say hey!”

MJ: Do you have any funny stories from previous gigs? Which have been some of your favorite venues to play? 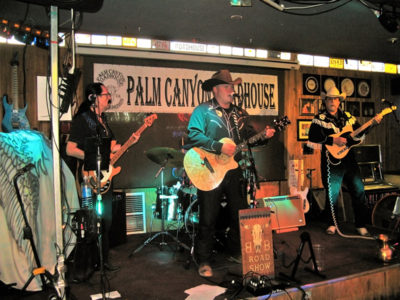 Bo: “One of the funniest things I can think of resulting from a show was that either Mike and I get asked if we are a father-son duo, or I have been asked if Cris was my Grandfather at one point. Practices are always a fun time. We are all very light hearted during our rehearsals but we know when it is time to do business and when we can mess around. Cracking jokes calling Mike “pappa” and Cris “pappy” because of the incidents beforehand, or telling each other something funny that happened that day. The great venues that we have played so far for me would definitely be Kokopelli’s Kantina, because that was the very first place that gave us our first gig, also The Palm Canyon Roadhouse, The Village Pub, and Willie Boys. All these venues have had great sound, and even better staff that made us feel at home. The crowds were also some of the best we have ever had. I am still fairly new to this and we are a young band so hopefully there will be more great venues to come.”

MJ: Tell me about your nicknames for each other and any backstage antics you’d like to share?

Bo: “Ah nicknames haha. So I personally go by Bo, at least for the crowd, otherwise I have had so many different nicknames coming up through the Marine Corps that I’ll answer to just about anything. Mike goes by “The Professor” because he is usually the mad man behind the board making us sound good. Cris “Alright Alright Alright” Aldrich, or “Pappy” again from being asked if he was my grandfather. We call our bassist “Mean Gene” even though he’s far from it. Practice is always a laugh just because I am surrounded by some of the best men I could ever hope in having as a new guy on the scene. They’re just a bunch of great guys, and we have gelled together quite nicely in this past year and things are only looking up from here.”

MJ: Your musicians have some impressive musical resumes. Tell me about what makes them so great and how they contribute to the band?

Bo: “Let’s start with Mike. The first time I met him, he was playing up at the Sound Stage in Pioneer Town with the Gypsy String Quartet. He is a shredder and has taught me a lot not only on playing the guitar, but music in general. He joined us one night after a Willie Boys gig and has been with us ever since. Gene (bassist) was one of the first guys I met out here once I started doing the music scene. He plays everything and he plays it well. He is a great fit for us as a whole and I am really happy to have him. I met Cris during an open mic night at Kokopelli’s Kantina. When my best buddy and a man I consider a brother, Josh aka Buck started this whole thing, Cris was the first to really hear what could be and basically took us under his wing, teaching us more of the business side of things along the way as well as introducing us to many new people.”

MJ: How did you come to decide on music as a career?

Bo: “I am originally from Williamsport, Pennsylvania. Left home at 18 when I signed up for the Marine Corps and have never really looked back. I first met Josh when I was stationed in Georgia with him. We became friends very quickly and realized we both had a love for music. When we would stand post together we would write songs and have each other look at them. That’s where some of the songs we play today originated from. I was then stationed in Twentynine Palms, which was great because Josh received orders out here too, which only enabled us to keep writing together. After deployment in 2015, I was in my barracks room relaxing and playing some songs and singing, when one of my other buddies I consider a brother, Kalib Drake, came in and heard me and told me I need to do this. So I practiced to get over the stage fright because I never in my wildest dreams thought I would ever sing in front of a crowd. I did my first ‘gig’ back home at Franco’s Lounge for the Toys for Tots Foundation drive. The feeling of hearing my friends and family applauding was the best feeling I had ever felt. It was like I was cloud nine. So from that moment I came back out here and figured why not and went to my first open mic night at the Joshua Tree Saloon with Josh and another friend of ours Kyle. After doing that Josh and I once again figured why not and continued doing every open mic night we could find throughout the week. We would get off work, hop in the truck, or jeep, and go find some place that would allow us to play. During the weekends we would have writing sessions or would just kind of jam our in our Corpsman’s garage (shout out to Mike “Doc” Smith), which grew to recording ourselves in the barracks room just having fun. Then we met Cris, he asked if we wanted a band, and from there is where it started taking off. Josh has since gotten out of the Marine Corps along with myself, but I refuse to change the band name even though he is back home because this is something we did together, and he still writes for us, plus it’s pretty catchy haha.”

MJ: Where can readers find your music and what are your plans for the future of The Buck & Bo Roadshow? 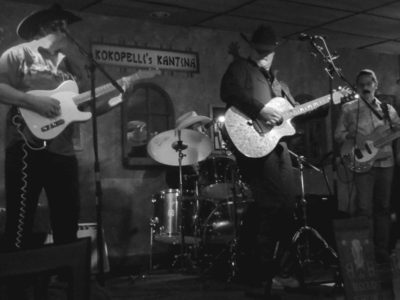 Bo: “Readers can find our music primarily on YouTube for now. We are currently trying to get a more established base for ourselves. We are also on Facebook and Instagram. If you just key in The Buck and Bo Road Show as is, it should pop right up for them. Writing wise, it is an everyday thing. Something may come to mind and I write it down, then add more to it later. It takes a lot of practice to become good at writing, which is why I am so thankful to have the experience of the guys I have around me. They have all taught me so much over this past year and are the key reasons in why we sound the way we do as a band. Our hopes are to be able to find the time to start recording and possibly have an EP out by the end of this year. Touring as of right now is not in the near future for us. We are trying to again become more established throughout the community and get the word out about us, build a following, then I believe touring could be something. But until then we are just going to keep pushing to get the word, and our music, out. Our goals as a band as of now are to book more shows, and try to get a following behind us. Then again hopefully get a start on recording to get the EP out.”

August 12th at The Palm Canyon Roadhouse in Palm Springs

September 15th at The Tack Room Tavern in Indio