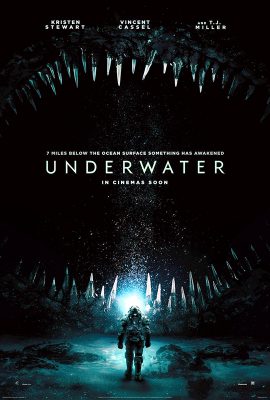 With theaters dark and likely to remain so for the rest of the year, the average American is spending about eight hours daily watching a show on a streaming platform.  In a way, that’s too bad, especially regarding movies designed to be experienced on the largest screen in the most immersive way possible and shared with an auditorium of strangers.  It’s a sad thing to even consider saying adios to the singular communal experience of enjoying a new and engaging film.

There’s one thing to be said about the following film: If you are going a little stir crazy being isolated at home, one thing that might make the experience a bit more bearable is imaging something worse.  Like being trapped seven miles underwater fighting monsters of unknown origin.

Watching William Eubank’s artfully crafter $80 million underwater creature feature on a big 4K screen, I was surprised to learn it’s been in the can and on the shelf for three years.  The film is akin to the delicious terror being snug in bed yet fearing the monster in the dark under the bed.

Eubank’s film is built around the threats from mysterious creatures that terrorize a research crew stationed seven miles below the ocean’s surface at the bottom of the Mariana Trench.

A terrific Kristen Stewert in a blonde buzz-cut plays Norah, a mechanical engineer who is among the survivors of a desperate deep sea drilling crew that may have inadvertently activated a quake that released monstrous creatures through a deep thermal vent.

This skillfully constructed, claustrophobic horror film shifts into high gear when the crew tries to get to a safe structure/pod that won’t implode under the extreme water pressure before their air runs out.  I could hardly breathe as they made their way through the sediment and muck that hid the lurking and deadly tentacles Lovecraftian-like predators.

I was surprised as how much I enjoyed this flawed and perhaps prescient film that’s been in the can and on the shelf for about three years.

Question: Is the monster really Mother Earth’s vengeance against those who exploit and extract her limited resources for profit?  Seems so.  If so, we have been warned.

There are a number of scenes starting with the credits and including Stewart stripping to her underwear that are reminiscent of Ridley Scott’s “Alien.”  And that’s not necessarily a bad thing.  It’s a fun, fast-paced, action-packed and dreamlike genre flick that’s a worthy diversion during these unsettling times of self-isolation.  20th Century Fox.

Available now for streaming or purchase.

NEW BLU FOR THE HOME THEATR: 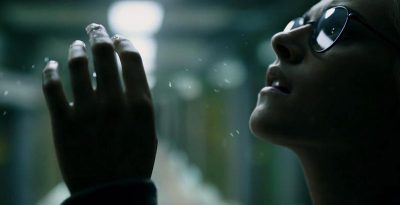 “The Gentlemen” follows American expat Mickey Pearson (Matthew McConaughey) who built an extremely successful marijuana empire in London.  When word gets out that he’s looking to cash out of the weed biz forever, it triggers plots, schemes, bribery and blackmail in an attempt to steal his lucrative domain out from under him.

Drop me a line.  What new films are you looking forward to seeing on the home screen?  What are you streaming?