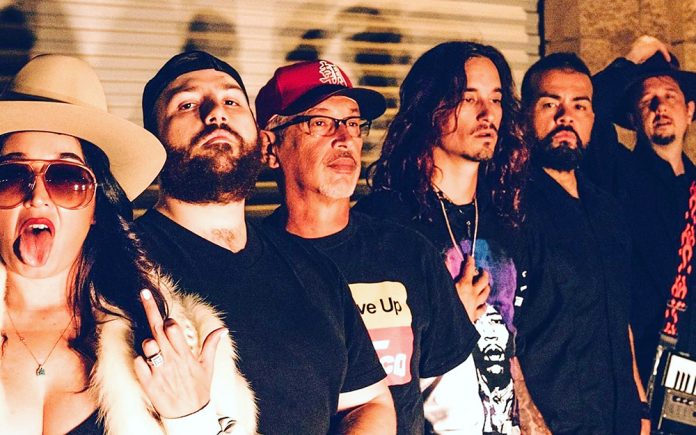 Over the past several decades, the Coachella Valley has become known for its diverse, homegrown music scene that transcends and often fuses various genres to create unique and unexpected musical projects. Cakes & Snakes is no exception. The band formerly known as, “Cakes and the Assholes,” has taken the concept of fusion to a fantastic level and the rest of us have been marveling at the results of their evolution.

Cakes, who herself is a dynamic, multi-talented artist, has evolved as a performer over her 10 plus years on the local scene. Much of her evolution has been guided and swayed toward the band’s current manifestation by the stellar group of artists she has thoughtfully assembled. At the risk of sounding cliche, Cakes has convoked a bit of a, “super-band” that consists of musicians who are all individually known and respected in the community for the various projects they have and are still a part of. Seeing as how a frontwoman is only as good as her accompaniment, her strategy has clearly paid off which is evidenced in the multiple CV Music Awards they have received including, “Best Live Performance Band,” “Best Band,” and “Best Frontwoman.”

The “Snakes” in the group consist of Joshua Fimbres on drums, Nick Hales on guitar, Shannon Graham on synth/bass, and Renee Almodovar on percussion. The position of bass player was formerly filled by local music veteran, Aaron Ramson who left the band due to moving upstate.

I sat down with Cakes and Snakes over beers and pizza and decided to take advantage of being in the presence of so many accumulated years as performers by asking a bit about where they are and how they got there.

CVW: Let’s talk about the new album being released. It’s called, “Stimuli.” What’s the meaning behind that?

Fimbres jests: Because all the songs we did sober sucked. (Table erupts into laughter). The best songs we came up with were created while we were inebriated and feeling ourselves. I mean…the song, “Pussy Poppin’ Blues” was basically a live recording we did at 1:00 am.

CVW: Okay, Josh. I know you well enough to know that music has always been an important part of your life. Many people have known you as a rapper from the hip hop group, Thr3 Strykes, but you are a drummer and dabble in guitar as well. How did you get into music in the first place?

Fimbres: Well, my grandpa was a musician and played in big salsa and merengue bands and they were really good. I guess it was intimidating because I stopped playing guitar at age 10 because I thought I could never be as good as them. Then all my friends started playing guitar and someone needed to play drums so, I basically taught myself. I’ve been playing for 25 years now.

CVW: How about you Renee? Same question.

Almodovar: I started out as a rock drummer in LA. We would play covers at weddings and those sorts of events. Eventually, I joined a big-band orchestra that had been around since the 30s and 40s. We played all kinds of events from family reunions to conventions and corporate gigs. It was a really great experience. After I started working a government job, I basically just quit music for 25 years until I came back to the desert where this guy from a group called, “Cock Robin” asked me to play percussion with them at Joshua Tree Music Fest. I told him I didn’t have drums at that point, but he had some I could borrow. The best part was afterwards, when he paid me, he told me that I could go ahead and keep the drums!”

CVW: Shannon, you are the newest addition to the band and in my opinion your sound provides an immense amount of depth and texture to the general sound. Over the years, between your projects, “Techno Hillbillies,” and “Alien DNA,” you have established yourself as somewhat of a wildman on the keys with a ton of innovation behind every jam. I’m sure that some people might be surprised that you are somewhat of a classically trained musician. Care to elaborate on that?

Graham: At the age of 5, I started training in classic piano in a little town just outside of Memphis. I really wasn’t any good until about the age of 9 when things started to click. Ironically, that was about the time that I discovered Jimmy Hendrix. That was when I thought I really wanted to be a guitar player…which I did. But I always kept playing the piano and studied classically until I was around 14. I also played trombone in marching bands throughout my years in school and anyone who knows about marching bands in the south knows they are a big deal. As far as what I do on the piano, I truly believe that I could not have learned my improvisational skills in California. That was a benefit of learning and playing music in the south.

CVW: Nick, you are the youngest member of the band which might account for the energy level it must take in order to juggle so many bands in which you are an integral member. I think most of us lost count a long time ago but it’s no secret that you are the most in demand guitarist around these days. How did you get started?

Hales: I started playing guitar around the age of 12. Eventually I met enough like-minded kids who played instruments and we formed the first band I was in called, “Fist Full of Glass.” We actually recorded an album when we were around 17. One project always leads to another, so here we are. Doing what it is that we love the most. 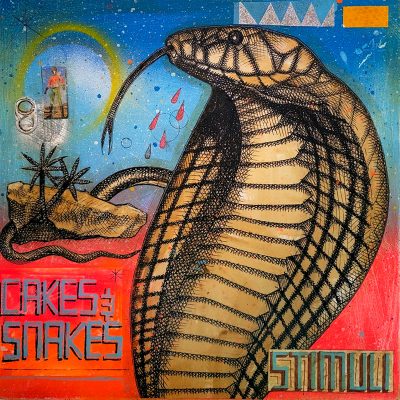 Cakes: Stimuli is being released on July 2nd. It was recorded, mixed and produced at an undisclosed location called The Fold in Palm Desert by Tony Gafrancesco and Jon Russo. We recorded a week before everything shut down for Covid and the band didn’t meet back up for practice again until 5 months after the shutdown happened.

This whole process for this album was interesting.  Do we put out an album when it seemed like the whole world was shut down and nothing would come of it or do we wait?  We waited, and I’m glad we did.  Yeah the songs are two years old now and our sound has evolved since then but these will be the OG Cakes and the Assholes songs that we played with our bass player Aaron before he left.

CVW: Do you want to talk about Aaron (Ramson, former bass player)?

Cakes: Yes, he was my music brother and we definitely had a connection which makes me sad that he is gone but happy for him because he has moved on to better things.  This album wouldn’t be what it is without his input in playing and writing of these songs and I’m glad we were able to have this musical journey of 3 years with him.

CVW: Why did you decide to change the band’s name?

Cakes: I was feeling some pressure to change our name because it wasn’t commercial enough.  I am a business person so I understand having the word Asshole in your name would cause some problems and after we had to change it on a flyer several times for kid friendly shows, we decided it would be best for our future to change it.  After some random names got thrown around we decided to change it to CAKES & SNAKES because at a show at the Saguaro, Josh’s dad said we would be a lot cooler if we were called Cakes & Snakes. True Story.

CVW: What’s something you always wanted an interviewer to ask you?

Cakes: I would want an interview to acknowledge my song writing or maybe ask me what the songs are about.  I feel like I’m a better songwriter than I am a singer and I have a knack for coming up with cadences and free styling but, when it comes up to writing, I always save it for when I am at my lowest because I feel like my honesty and emotions come through better than just writing some generic shit to fill in some gaps.  That’s why all my songs are kind of angry I guess you can say…or sad.  I don’t like to write to major chords, the guys can tell you. Shannon will start a scale on a major and I’ll shake my head and say no I can’t do it. Happy chords are not my jam.  The bottom line is that I create Music because it fulfills me in ways that love, money, and people will never fulfill me.

Cakes & Snakes will be performing along with Slipping Into Darkness on Friday, June 2nd at The Hood Bar & Pizza in Palm Desert.

Keep an eye out for Stimuli on all platforms.