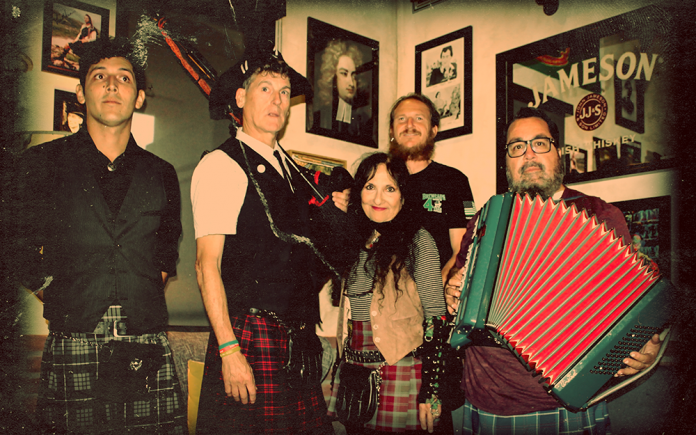 The California Celts are a high-desert based group of musicians that take classic, Scottish and Irish sounds and fuse them into something for almost everyone. With influences peppered in that vary from ska and punk rock to bluegrass, a California Celts show takes you on a journey with the destination being a great time to be had by all.

I had the opportunity to catch a California Celts show on a recent Saturday evening at “O’Caines Irish Pub in Rancho Mirage and, to be perfectly honest, I wasn’t quite sure what to expect. Between the kilts, the pageantry and stage presence combined with beautifully orchestrated transitions between genres; I was fully captivated as was the rest of the pub’s patrons. Long story short, the California Celts put on a great show and any effort one might put in to check them out live is going to be fully worth it.

Once I learned a bit more about this fun and unique ensemble, things really seemed to make sense. The Cali Celts are a ragtag group of performers who have a lot of projects going on along with a plethora of experiences that, when mixed together, create an exciting savoir-faire that causes them to complement each other like corned beef and cabbage.

The California Celts consist of Chris Poland on lead vocals, bagpipe, tin whistle and guitar, Kevin Patterson on drums, Christopher Clayton on guitar, Owen Willingham on accordion and Brent Simpson on bass and vocals. Last, but certainly not least would be, “Peppermint” Patti Hood-Lindsey on Celt harp, xylophone, keys, backup vocals and various percussion instruments including wooden spoons. I must take a minute to mention that seeing Peppermint Patti and the cool setup (custom built by her husband) that she utilizes to perform with all of these instruments is almost reason enough to check out a California Celts show. She has led a stellar career as a professional harpist that has span decades performing and recording with legendary acts like, John Anderson of Yes, The Church and Guns and Roses.

I chatted with the band’s frontman, Chris Poland to get some background on The California Celts.

Poland: “The California Celts were started 17 years ago by the Poland brothers along with Greg MacElroy A.K.A. “Johnny the Fox” who was an Irish skinhead from Dublin. I’ve known our drummer, Kevin, since he was born. Our fathers had a band together in the 70s called the Trojans and I’ve known Owen (accordion) since I was 5 months old. We have enjoyed a monthly residency at the Auld Dubliner in Long Beach for the last 17 years. In addition, our album, “Take Me Away” was nominated for a Grammy.”

CVW: “I know that most, if not all of the band members are multi-instrumentalists that are involved in a lot of various projects…care to elaborate on the specifics behind that?”

Poland: “Any kid musician is a multi-instrumentalist. Musicianship is in the head, not the hands.”

CVW: “I heard that while I am going to be writing this article, you guys will  be embarking on a tour throughout multiple cities in the Southwest?”

Poland: “Yes, the same group of five people are touring as two different bands. On two of the dates we perform as the California Celts and the rest we perform as our other band of 32 years, Warsaw Poland Bros. The latter is actually our most popular band.”

If you want to have a fantastic, musical experience that is an absolute blast for all, check out California Celts or any of the other projects they are associated with. Drag out your friends, your parents and even your kids and I’m pretty sure everyone will get their groove on.

You can find their music on Spotify and follow them @ https://www.facebook.com/californiacelts