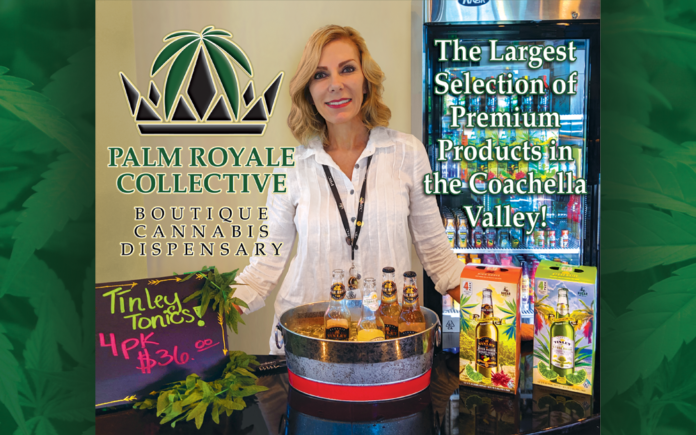 The story of how Palm Royale Collective came to be required a journey of pain, prescription drugs and a sincere quest for healing. Ten years ago, Kathleen Wilson, co-owner of the dispensary, was in a car accident that would change the course of her life. While driving the rainy roads of Washington State, her car hydroplaned and careened off the road. The impact tore cartilage and knocked her hip out of the socket. The doctor started writing prescriptions for her pain- Vicodin, oxycodone, and hydrocodone followed by anti-depressants Wellbutrin and Xanax. She wasn’t improving and became more frustrated.

“When I started to complain about not feeling better, my doctor offered to write another prescription for that! She was writing prescriptions for prescriptions. I knew I was in trouble so I reached out to Monica & Josh, who have five (cannabis) farms in Washington. She is well versed in (medical) cannabis,” says Kathleen of her eventual partner. This first step towards cannabis as a treatment for her pain as well as her greater wellness, lead her to discover a new direction and purpose in life. 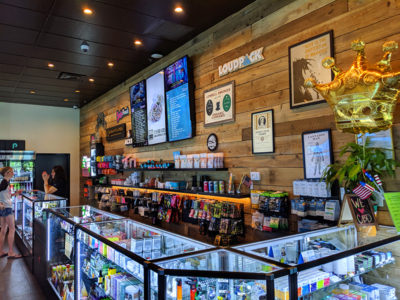 Like many people, Kathleen grew up in a Christian home and was hesitant about using medicinal marijuana. She says her father was in law enforcement so the idea of using “marijuana” was doubly taboo. What she discovered was far from what she imagined (or had been misled) to believe about the powerful plant. “I wanted to heal naturally through yoga, walking, and biking. Monica introduced me to topicals at first, which was ok, but it didn’t get me off of the prescriptions,” she reflects. Soon she was learning about the medicinal aspects of CBD and THC. Eventually, she was able to get away from the pharmaceuticals completely and found herself invigorated with a new passion to help people find alternative paths to wellness.

“My husband and I started out in Washington. We applied for five licenses but it’s a lottery system up there. So, it’s not what you know but really who you know. We couldn’t retail up there so we came down here (Coachella Valley),” she says. The desert was a place they had been coming to for twenty-five years and was the intended destination for their retirement. When the opportunity to work remotely knocked, they answered and relocated to Palm Desert five years ago. “My husband started going to Palm Desert City Council meetings and asked if they were going to be getting (dispensary) licenses. At that time, (City Council) was just starting with ad hoc meetings,” she recalls.

During the interim, Kathleen found a product that made a lasting impression- Dr. Robb’s Mom’s Formula. “I started using Dr. Robb’s (products) and thought I was going to just be a brand ambassador. We ended up being one of the lucky six licenses awarded in Palm Desert. So, here we are. I’m really excited about the opportunities we have to help people!” she says with unrivaled joy and purpose. Dr. Robb Farms, according to their website, was created by the first American Ph.D. with certified technical expertise in growing cannabis. Dr. Robert Flannery created the product to help his own mother who sought recommendations for safely medicating with cannabis while going through cancer treatments. Kathleen dropped some knowledge about Dr. Robb’s Mom’s Formula, “It has 5 CBD to .05 THC- it doesn’t give you a head high but is great for inflammation and your autoimmune system. It gives you a sense of calm and well- being. I was able to get off of all of my prescriptions using CBD and just a tiny bit of THC. Again, not to get a ‘head high,’ though. I’m kind of control freak and I don’t like being high, but I love the healing aspects of CBD. The more we’re learning about it, I truly believe God put this plant on this Earth for a reason. Why else would we have receptors in our body that are eating this CBD up?” says the cannabis evangelist. 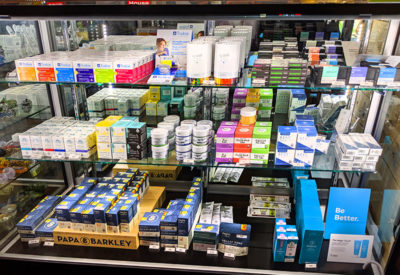 Kathleen recalls a time when representatives from the local medical community showed up at City Hall to stand in opposition to medical cannabis being allowed in Palm Desert. “It’s unbelievable what is happening in the medical field now and how fast things are changing. We now have doctors sending their patients to us!” Her joy is quickly dampened as she reflects on the number of people that still need the help medical cannabis can provide and those who died without access to the help they needed. According to the U.S. Department of Health and Human Services website and a 2017 National Survey on Drug Use and Health, Mortality in the United States, (2016), an estimated 11.4 million people misused prescription opioids while nearly 80,000 died from opioid-related overdoses. The projected numbers from the Center for Disease Control, states that between 2016 and 2025 we could see as many as 700,000 overdose-related deaths. Kathleen (and many others including doctors, scientific researchers, and legislators) believes cannabis can help with pain management and addiction.

The topic of opioid addiction and deaths from overdoses hits home for her. “Do you know that 82,000 will die from opioids this year? My 25-year-old step-daughter died the last 4th of July from an Opioid overdose. So, this is really passionate and personal to us,” she pauses. “Three of us (at the dispensary) lost loved ones last year because of opioids- a boyfriend, a son, and our daughter. We want medicine that the side effects are something you want to enjoy if you choose to enjoy that- not something you become addicted to!” her voice fills with conviction. She is hopeful that the tides are turning as more medical doctors are referring patients to Palm Royale for guidance with various CBD and THC products. While there is progress, hospitals, pharmaceutical giants, doctors, legislators and regulators are slow to change as research and studies in the U.S. lag behind other countries.

An April 11, 2017 article from U.S. News & World Report entitled “The Holy Land of Medical Marijuana,” by Yardena Schwartz, tells a story of how Israel, a country the size of New Jersey, has quietly become the epic-center of medicinal cannabis. Raphael Mecholum, an 86-year-old Israeli researcher and chemist at Hebrew University, is considered to be the pioneer of cannabis research. Mecholum is credited with discovering the human brain produces its own cannabinoids- the compounds that stimulate the human body’s receptor system. The National Institutes of Health, one of the world’s foremost medical research centers (and an agency of the U.S. Health and Human Services) believes these compounds could relieve several illnesses including cancer, diabetes, multiple sclerosis, and schizophrenia. This discovery provided critical legitimacy to the study of medical cannabis, a plant previously pushed to the fringe of science. With fewer roadblocks in Israel, better scientific research can be conducted and this research is leading the world to new understandings about the potential of cannabis for health, wellness, and economic growth. 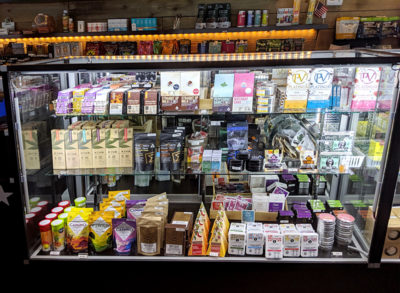 Palm Royale Collective was recently chosen to be one of a select few dispensaries in the U.S. to carry Tikun Olam, an Israeli-based global medical cannabis brand that cultivates, produces and provides evidence-based award-winning medicinal cannabis. For over a decade, Tikun Olam has been pioneering modern medical cannabis agriculture, treatment, and clinical research since 2007. The name, translated from Hebrew means “Repair the World,” and reflects the company’s mission to bring cure and alleviation providing evidence-based medical cannabis treatment worldwide. The company and products are backed by over a decade of research, an unparalleled standard in the U.S. market for medically tested heirloom strains.

I spoke with Omer Saar, President of Long Beach-based Feelgood Sales Group, distributors of the Tikun Olam line about the opportunity to represent this brand. He says, Tikun Olum originally started out as a volunteer project to treat PTSD. “They received the world’s first cultivation license so they changed everything about the scientific research that could be done on cannabis. This happened in the same country that has the leading scientists (in the industry). So, research was dependent on police confiscated product to expanding research across multiple products, improvements in genetics and cultivation practices and understanding heirloom strains that have been (on Earth) for thousands of years. The closer the strain is to nature, the better. It’s like when we are in nature, we just feel better,” he pontificates. 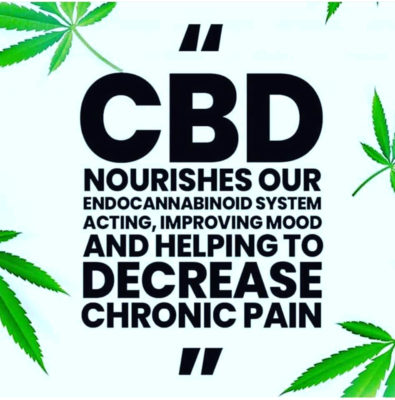 He says partnering with dispensaries like Palm Royale Collective, who dedicate themselves to client care, is important for the brand and the quality of experience customers or patients will have with the Tikun line. This is a soft roll out for the brand in California, with three products- tinctures, vapes and topicals- being introduced to select stores. “Feelgood is being strategic with the stores we partner with and Palm Royale was at the top of the list! They are the most passionate about the medical side of cannabis,” he states.

Feelgood Sales Group focuses on how a brand will be represented and want to have plenty of care and attention for the end-user. They will collaborate with shops and help to educate customers and hospitals and hope to invite doctors to events geared towards product education. “With Tikun, they started in 2007 and inherited a wealth of knowledge (from leading Israeli scientists) so science and research are part of the brand. Products rarely have hard research behind them like this. The research conducted (over the years) involves over 40,000 patients and serious scientific journals. In the mid-1960s, THC was discovered in Israel!” he says. The scientists working with Tikun Olam, cross-bred a cornucopia of cannabis strains, ultimately creating over 230 strains! They tested the strains to find the best properties and then narrowed them down to the thirty most effective. Now, they will bring the six most effective strains to the U.S. but Saar says they will begin with three. 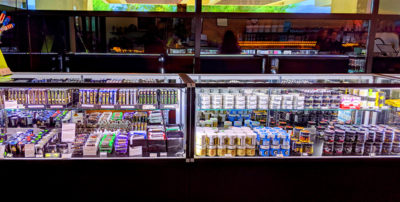 “My 83-year-old mom is feeling the benefits and she thought cannabis was taboo!” shared Kathleen. “I started her off with a topical and she did okay, had some relief, then started her on Dr. Robb’s with a little THC. She has osteoporosis and a pacemaker but she cleared it with her doctors. They told her- cannabis does not interfere with any medication at all. She had immediate relief! She called me this morning, now she wants to start growing it in her garden so she can juice it!  She wants to whole plant juice it because she saw on TedTalks how good CBD is for your autoimmune system!” 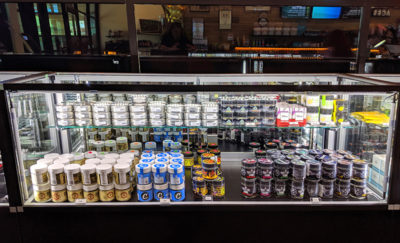 The store reflects a “Starbucks” like feel and Kathleen says their goal is to work with everyone to be able to understand the products, how to use them and benefit from the medicinal aspects of cannabis. They have products that cost as low as $20 out the door and encourage customers to try a product first before investing. She says for many older patients, learning about CBD can really improve their quality of life. They have created a video to help educate people on how CBD can help manage a lot of issues. The video can be found here: www.palmroyalecbd.com

For more information on Palm Royale Collective in Palm Desert, stop by the store and the friendly and knowledgeable staff will be sure to assist you or go to their website for further information at www.PalmRoyaleCollective.com. Palm Royale is located at 75048 Gerald Ford Dr. Suite 101, Palm Desert 92211. 760-851-3286.