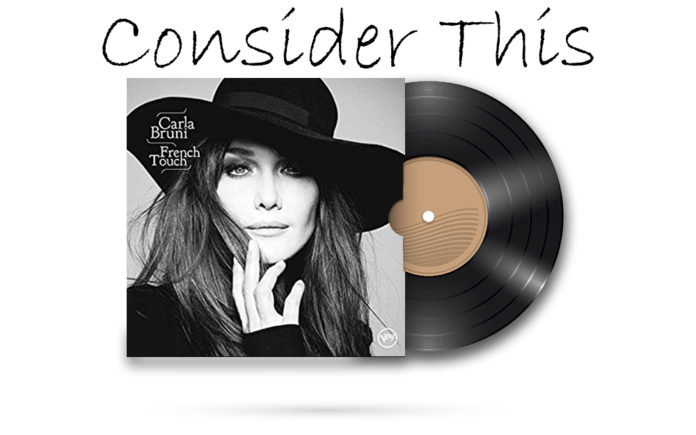 Carla Bruni was born in Italy in 1967 to a family of musicians and manufacturers. Her mother was a concert pianist, her father a wealthy industrialist and classical composer. When she was seven her family moved from Italy to France, apparently to escape the threat of kidnapping by the communist terrorist cell, the Red Brigade.

Following time in a Swiss boarding school, she was signed to a prestigious modelling agency. Soon she was walking the runway for Guess, Karl Lagerfeld, Christian Dior, Yves Saint-Laurent, Givenchy and Versace. A contemporary of Cindy Crawford and Naomi Campbell, Carla famously dated Eric Clapton and Mick Jagger.

By the time she hit 30, she had quit modelling and began devoting herself to a career in music. Her debut, Quelqu’un m’a Dit (“Someone Told Me,”) arrived five years later. It went to #1 on the French charts.

She released her second record, No Promises, which paired her original music with lyrics from poets like W.B. Yeats, W.H. Auden, Emily Dickenson and Dorothy Parker. No Promises also shot to # 1, while she was still promoting it she met newly divorced French President Nicolas Sarkozy at a dinner party. Following a whirlwind romance, the couple married in early 2008. Now she wasn’t only an ex-model/singer-songwriter, she was also First Lady of France.

It’s definitely difficult to picture Lady Bird Johnson or even Laura Bush breaking into song, much less pursuing a music career while their husbands were in office, (although you can kind of see Michelle Obama collaborating with the Roots or Pharrell, and we know she can bust a move). But France doesn’t adhere to the rigid code of etiquette that Americans ascribe to, (until recently, that is). Carla released her third album, Comme si de rien n’ etait (As If Nothing Happened), in the summer of 2008. The title felt like a slyly sardonic reference to her recent marriage. Despite her elevated profile, (or perhaps because of it), this charming effort didn’t sell as well as its predecessors.

It was another five years before her fourth album, Little French Songs was released. In the interim, Nicholas Sarkozy lost his re-election bid to Francois Hollande. Writing or co-writing 10 of the 11 tracks, she celebrated (and humanized) her husband on “Mon Raymond” and cheekily teased his Presidential successor on “Le Pingouin.” A low-key affair, it was her first effort for the venerable Jazz label, Verve.

Now she has returned with The French Touch, her first album completely in English. While past albums have focused on her own compositions, which feel heavily influenced by musical avatars like Joni Mitchell and Serge Gainsbourg, this record pays homage to the songs she grew up on.

The first two tracks, “Enjoy The Silence” from Depeche Mode and “Jimmy Jazz” by The Clash set the tone for the entire record. “….Silence” was a massive Post-Punk hit bathed in icy synths, tape loops and Dave Gahan’s stentorian delivery. Carla slows the tempo considerably, leaning on acoustic guitar, piquant piano and her Intime vocals. Without the original’s clanging arrangement, this version zeros in on thoughtful lyrics like “Vows are spoken, to be broken, feelings are intense words are trivial/Pleasures remain, so does the pain, words are meaningless and forgettable.”

“Jimmy…” originally appeared on the Clash’s seminal London Calling record, which was released in 1979. Joe Strummer’s largely improvised, Film Noir lyrics are wrapped in a shambolic shuffle. Carla plays up the Jazzy Slink, adding a finger-snapping beat, arch piano fills and light brass accents that give it a Big Easy flavor.

She takes four songs from the ‘70s and drastically reconfigures them. First up is “Miss You,” the Rolling Stones’ circa ’78 Disco-Punk mash up. Jettisoning the de riguer four-on-the-floor Disco rhythms, she swaps them out for a seductive Samba groove. Spanish guitar, swoopy strings and stacked vocals effectively neuter Mick’s booty-call lyrics turning the tune into a breathy summons to friends.

Particularly surprising is her take on AC/DC’s “Highway To Hell.” Essentially a head-bangin’ celebration of hedonism, in Carla’s hands it playfully pokes fun at the debauchery in ¾ time. Woozy horns, wily bass lines and Jazzy guitar riffs connect with a jittery beat. Even as she flirts with destiny; “Hey Satan, payin’ my dues in a Rock N’ Roll band, Hey Mamma, look at me, I’m on my way to the Promised Land,” her mien is carefree and coquettish.

As she jokes in the liner notes, Carla strips away the ‘Nordic vivacity’ of Abba’s “The Winner Takes It All.” Spare and pared down, it’s just her flinty voice, rippling acoustic guitar and quiet cello notes. Her quiet take throws a spotlight on the inherent melancholy pain and loss in the song.

When you cover beloved, well-known songs, there’s always a danger of veering into celebrity Karaoke territory. If the songs feel like carbon copies of the originals, why bother? Carla kinda dodges that musical quicksand on the album’s two Country cuts, “Crazy” and “Stand By Your Man.”

“Crazy,” was written by Willie Nelson and originally a hit for Patsy Cline. Since 1962 it has been recorded by everyone from Shirley Bassey to Neil Young. Wisely, she enlists Willie, his trusty, six-string steed Trigger and his longtime harmonica hermano, Mickey Rafael. Over lapping percussion, crusty acoustic guitar, electric piano and smoky harmonica, Carla and Willie harmonize with an affectionate air of bemusement. Their take quietly diffuses the heartache of the original.

The latter is pleasant but less successful. As co-Written by producer Billy Sherrill and singer Tammy Wynette, it was her iconic original that leapt to #1 on the Country charts and become a crossover hit on Pop charts, peaking at #19, 50 years ago. Carla’s take is a sweet sing-song that is nice, but lacks the grit and grace of Tammy’s definitive version.

Other interesting tracks include the old Dick Haymes chestnut, “Love Letters,” and the slightly more obscure “Please Don’t Kiss Me.” The song was originally performed by Rita Hayworth in the Orson Welles’ Film Noir, “The Lady From Shanghai.” The record closes with a wistful read of the Henry Mancini classic, “Moon River” that kind of melts your heart.

When models (as well as actors), attempt a musical career, their efforts are usually met with a healthy dose of skepticism. For every Katy Sagal, there are a hundred Bruce Willis’ and Don Johnsons.  Carla Bruni had the extra hurdle of Presidential proximity. But she has deftly sidestepped any cranky preconceptions. It’s clear she has the goods. On French Touch, she honors her own musical touchstones and manages to add something new.