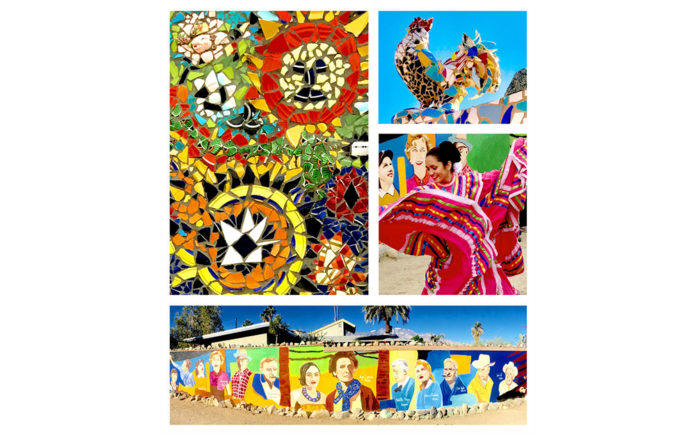 The 8th Annual Cathedral City Cove Home Tour of Artists’ and Historic Homes sponsored by the Agnes Pelton Society and the City of Cathedral City will be held on Sunday, February 11, 11a-3p. Six historic and artists’ homes in the lower Cathedral City Cove will be open to the public and a block party will be held fronting the Pelton House at 68680 F Street (Agnes Pelton Way), that will include curated fine art exhibits, performances of live classical and Mexican Folklorico music and dance, demonstrations of contemporary dance, live-painting, artmaking for children, sidewalk chalk art, soundscaping by DJ artists, and Spoken Word presentations.

Highlights of the event include the showcasing of the Mural Path on Chuperosa Lane of murals commissioned by the Agnes Pelton Society, the unveiling of several mosaic murals by Peter Palladino, and a live-installation of a newly commissioned Frida Kahlo mosaic by Marni Navarro. Participating guest artists invited to exhibit include Joe Novak, Gary Borgstedt, Jill Carey Michaels, Kym Ghee, Cyrstoffer Showmaker, Heather Sprague, Tim Townsley, and Juan Manuel Alonso.

The centerpiece of the event is the Pelton House at the intersection of Chuperosa Lane and F Street (Agnes Pelton Way), located in the heart of the fabled Cathedral City Cove artists’ colony.  For over 20 years, this is where Agnes Lawrence Pelton painted her notable decorative plein air desert landscapes alongside her abstract Transcendental masterworks. For several years, her house was used as one of the first art gallery spaces in Coachella Valley until the art colonists opened the Desert Art Center in 1954 that recently celebrated its 65th anniversary in Palm Springs. From the 1930’s to the 1950’s, this vibrant artists colony was visited by world renown writers, painters, and musicians, who came to visit, teach, and create. The Home Tour celebrates this history and aspires to revive interest in that rich lost history of the CC Cove. Here in Coachella Valley, where the Mid-century Modern styl enjoys an elevated status in popular culture, the Agnes Pelton Society strives to honor the Transcendental aesthetic and its influence on Mid-Century architecture and preserve Pelton’s legacy as a preeminent American painter.

Arguably, one of the significant art movements that preceded and partially laid the groundwork for the Mid-Century Modern style began here in desert by the Transcendental Painters Group, organized and led by Cathedral City doyen, Agnes Lawrence Pelton. The guiding principle of the Group was to create art that attended to the spirit. In that regard, the Transcendentalists were in alignment with the Mid-century Modern style of clean lines and minimalist composition that referenced the spiritual Japanese Zen aesthetic.

In 1932, Pelton, who was already recognized as a prominent American painter, arrived in the desert to paint.  Seven years later, she designed and built her home in the Cathedral City Cove and over three decades established and thrived in what became the Cove artists’ colony.  After she passed in 1961, the history of that era faded and was virtually forgotten. The mission of the Agnes Pelton Society and this annual fundraising event is to honor and sustain her legacy and in the spirit of the Transcendentalists, build community.

The Pelton House is soon to be designated as a historic site by National Registry of Places of Interest and a retrospective of Pelton’s Transcendental paintings, “Agnes Pelton, Transcendentalist Painter,” will tour in the Spring of 2019. The touring exhibition will begin at the Palm Springs Museum of Art and rumored to include a showing at The Whitney Museum of American Art.

Tickets are $20/children free, and can be purchased on the day of the event at the CC Senior Center, 37171 W. Buddy Rogers Ave. (two blocks south across Hwy 111 from CC City Hall) or online at www.agnespeltonsociety.com (Will Call at Senior Center ticket booth.)

All the Block party activities and exhibits are free and open to the public.

The Agnes Pelton Society is a 501c3 arts non-profit and selected as Non-Profit of the Year by the Cathedral City Chamber of Commerce.  Their mission is to support the legacy of Pelton by advocating for local artists, offering free art classes for children, commissioning local artists for public arts, and offering scholarships to deserving arts graduates from Cathedral City High School.