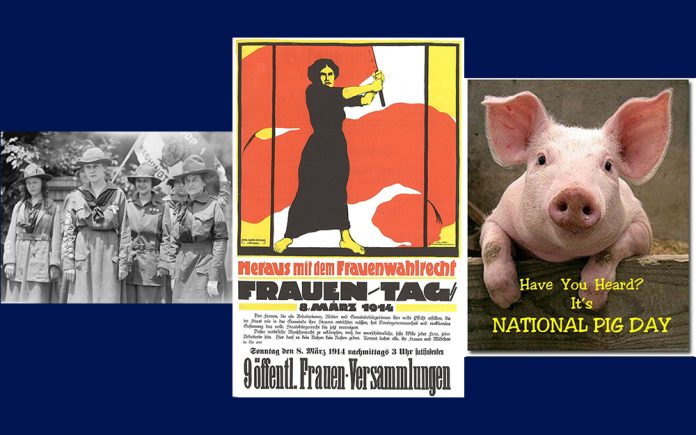 In like a lion and out like a lamb.  That is how many people refer to the month of March.  While many parts of the Northern hemisphere use the saying in reference to the tumultuous and changing weather of the month, its origin resides in Astrology.  The Zodiac animal that begins the month is Leo the lion while Aries ends the month and is a lamb.

March is the first month of the year where life is not interrupted by a national day off.  We mostly think of St. Patrick’s Day when thinking of things to celebrate in March.

While some may like to go out on the 17th to celebrate the Irish saint, others may prefer to start the month with International Pancake Day aka Shrove Tuesday. That is the day before Ash Wednesday and the first day of Lent. March 1st is also the start of Mardi Gras as well as National Pig Day, an event started in 1972 by sisters Ellen Stanley and Mary Lynne Rave.

The 2nd is Ash Wednesday as well as Dr. Seuss Day in celebration of the birth of Theodor Seuss Geisal aka Dr. Seuss.  The proper meal on the 2nd is green eggs and ham eaten with a man named Sam. Suess went to Dartmouth College followed by a graduate degree at Oxford.

Having withdrawals following the conclusion of the Olympics?  The two-week Iditarod begins on the 5th and runs through the 20th.  This race began in 1967 with $25,000 in prizes for the 58 racers that took part.  The race covers nearly 1,000 miles with the conclusion broadcast live on VUit or the Facebook page of Alaska’s News Source (aka Channel 2) or AlaskasNewsSource.com.

International Women’s Day is on March 8th.  Its first day of recognition in the United States occurred in 1909 and was organized by the Socialist Party. Back then, women were not allowed to vote.  It took until 1920 for women to win the right to vote here in the United States. The United Nations adopted the holiday in 1977.

Commercialism rears its head on the 9th with Barbie Day.  Started in 1998, people are encouraged to celebrate by visiting the Barbie Museum in Montreal or celebrate Barbie’s birthday with a small Barbie Party at home.  Barbara Millicent Roberts aka Barbie was born in 1959.  Her creator is Ruth Handler.

The Girl Scouts celebrate their birthday on the 9th.  The Girl Scouts were started here in the United States in 1912 by Juliette Gordon Low in Savannah, Georgia.  Low wanted her group to be part of the Camp Fire Girls, a much larger organization but they said ‘no’ to her idea of bringing girls together to serve their local communities and building a sense of adventure into their lives.  By 1920, Girl Scouts had over 70,000 members.  Today the Girl Scouts have 2.3 million girls and 900,000 adult women as members in the United States with more than 10 million globally.

Other holidays and commemorations during March include St. Patrick’s Day on the 17th, International Astrology Day on the 20th, Talk Like William Shatner Day on the 22nd and National Tamale Day on the 23rd.

The month ends with Cesar Chavez Day, a federal commemorative day on March 31st.  President Obama formalized this holiday in 2014.  Cesar Chavez was a farm worker who led a civil rights campaign to improve the wages and working conditions of other farm workers.

On the 13th, Daylight Saving Time begins.  Don’t forget to move your clocks ahead one hour.