Has the Brexit gotten you down? Has this latest election cycle stressed you out? Are you tired, run-down, listless? Do you poop out at parties? Are you unpopular?

Well, the answer to all your problems is in this little bottle. (Oh, wait, that’s Vitameatavegamin)

Actually, a respite from all your recent woes might be found by digging into some cool summer sounds. Each year at least one fun record emerges to take the edge off the hot weather. This year that music can be found on the self-titled debut from Charlie Faye & The Fayettes.

Charlie Faye arrived at playing music in a circuitous fashion. The New York City native became enamored with Blues and Bluegrass just as she finished up college in Philadelphia.

Once she mastered guitar and mandolin, she began performing with musicians like Greg Garling and Dan Zanes.

Influenced by singer-songwriters like Lucinda Williams, Rickie Lee Jones and David Baerwald, she focused on writing her own songs. After she relocated to Austin, Texas, her first album, Last Kids In The Bar was released in 2006.  She followed up three years later with her sophomore effort, Wilson Street.

For her third album, Charlie tried something a little different. Instead of going on tour she would stay in a town for a month, get to know the music scene, collaborate with locals and write a song. She covered 10 cities in 10 months, the result was 2011’s Travels With Charlie. Her fourth record, 2013’s You Were Fine, You Weren’t Even Lonely chronicled her break-up with Austin music legend Will Sexton.

All four albums hewed pretty closely to the alt.country/Americana paradigm, but Charlie was looking for a change. Recently she had become inspired by ‘60s Soul and R&B, specifically Girl Groups like the Ronettes, Shangri-La’s, Shirelles, Martha Reeves & The Vandellas and the Supremes. The music she was writing reflected this new passion, rather than try and fold that style into an Americana mold, she decided to form her own Girl Group.

Although she had left Austin for Los Angeles, Charlie reached out to Austin-ites Betty Soo and Akina Adderley.  Betty has made a name for herself as a Folky singer-songwriter, recording two well received solo albums as well as two collaborations with Doug Cox. Akina is descended from Jazz royalty, as granddaughter and Great Niece to Nat and Julien “Cannonball” Adderley.  Instead of resting on those laurels she has carved out her own niche fronting a 10 piece Soul band, Akina Adderley And The Vintage Playboys. 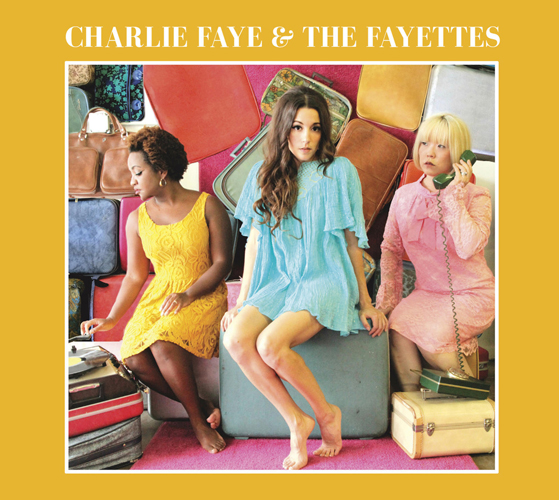 The opening track, “Green Light,” sets the tone for the whole record.  The arrangement of Wall-Of-Sound timpani and triplet drum fills is a perfect combo-platter of Phil Spector grandeur and Hitsville U.S.A. syncopation. Sugar-rush electric guitars cascade over tinkling glockenspiel and a honeyed vocal mix that is both breathless and breezy. Even the lyrics offer a rev’ed engine metaphor; “Now I’m falling, so won’t you stop stalling/You’ve got the greenlight baby, I’m saying yes not maybe…You’ve got the greenlight, baby go!” It’s the perfect song   summer cruisin’.

The spectre of Spector looms large on three tracks. “Loving Names” is a canny synthesis of Surf guitar and Spaghetti Western whistle cloaked in a majestic, Spectorian arrangement.  Rough and tumble guitar collide with rippling castanets and a crackling back-beat. Charlie’s vocals ache with heartbreak as she watches her ex work his wiles on a new victim; “You take her by the hand and tell her she’s your baby and she thinks life is grand.”

The sprightly melody of “Coming Round The Bend” is tethered to a galloping gait, sidewinding guitar, boomerang organ notes and ever-present glockenspiel. The lyrics offer this philosophical haiku regarding the passage of time; “At morning’s light you’ll see how steady and how slow you’ve been to cut the chord, tied to the life you used to know/Memories they link to the  past, things are changing fast/Hold on while this world spins right, we’re coming round the bend.”

The lyrical themes on “…Bend” continue to thread through “See You Again,” as Charlie exclaims “good times are waiting ‘round the bend.” Here, a locomotive back-beat is buttressed by a playful horn section and a guitar solo that splits the difference between Countrified molasses and Punktastic grit.

The action slows for a couple of tracks that are equal parts torch, twang and soul. “Sweet Little Messages” ushers the Girl Group trope of “waiting by the phone” into the 21st century. Over swoony vocals, sun-dappled guitar, supple organ and twinkly percussion, a solitary walk gains traction when a loquacious lothario lets his fingers do the walkin.’ “It’s one of those days, I’m feeling so tired, worn out and headed toward home/I’m walking alone through a sea of ‘togethers’ it’s all I can do not to check the phone/When I stop to worry and try to be patient, wouldn’t you know it I feel that vibration, it’s one of your sweet little messages.”

“One More Chance” shares some musical DNA with Sam Cooke’s seminal soul-stirrer “Bring It On Home To Me.” The Gospel-Blues melody is bookended by dolorous bass lines, intertwined organ and piano, plus a slow-burn guitar, Charlie’s plaintive vocal is front and center. Betty and Akina are a sympathetic Greek chorus as she asks for a romantic reprieve, noting “now I’ve learned some facts of life I didn’t know before.”

The best tracks here are “Carelessly” and “Eastside.” On the former, Charlie channels swinging ‘60s chanteuses like Dusty Springfield and Dionne Warwick as she insists “every time you act so carelessly, I feel like I’m hearing what you’re not telling me.” The lush melody is suitably Bacharach-ian, (really all that’s missing are his trademark flatulent flugelhorns), layered organ flourishes connect with a tick-tock rhythm and sparkly, Country flavored guitar.

The latter is a real surprise, a Stax-Volt boogaloo that blends chicken-scratch guitar, swinging horn section, and a pile-driving beat accented by cowbell.  (Everybody needs more cowbell). On the surface, it seems to be a celebration of the vibrant Latino culture of East L.A., but also offers a trenchant commentary on gentrification. “Now things have been changin’ everyday on the East side, people are movin’ the  hipsters are groovin’ all right/New buildings are going up, old houses are comin’ down, who’s gonna look out for the people who grew up in  this part of town?”

Other interesting tracks include the Country-politan “Heart” which weds a walking bass line, brushed drums and a guitar solo that splits the difference between high lonesome pedal steel and Hawaiiana slack key.  Meanwhile, “Delayed Reaction” is a frenetic Soul-Revue workout, powered by a leap frog beat and an organ wash that mutates into an “Everybody Skate Backwards” roller-rink solo. The lyrics limn the confounding sensations of instant and delayed attraction.

Closing the record is “It’s All Happening.”  A taut little cool-down propelled by a stair-step rhythm, jangly guitar and carnival keys, it serves as a loose origin story for the group. “Used To Feel so far away, never thought I’d see the day, putting all the pieces together, I pack my bag for a change in the weather/Got my ducks all in a row, spread my wings and I’m ready to go,

I’ve been waiting so long and it’s all happening.” Aside from the aforementioned players, Charlie and the girls received ample assistance on guitar from ex-X member, Tony Gilkyson and Lyle Workman, additional vocals from Noelle Hampton, Jaimee Harris and Jazz Mills and sly sax work from Steve Elson. The album’s MVP award goes to Eric Holden who handled bass, guitar, synths, glockenspiel, percussion and baritone guitar.

Charlie Faye And The Fayettes debut is a heady brew. Mixing the crisp and crackling Motown Sound with shiny, Brill Building songcraft, wrapping it in a Wall Of Sound. Clever, contemporary lyrics give the record a 21st century twist. It’s the perfect prescription for the Summertime Blues.