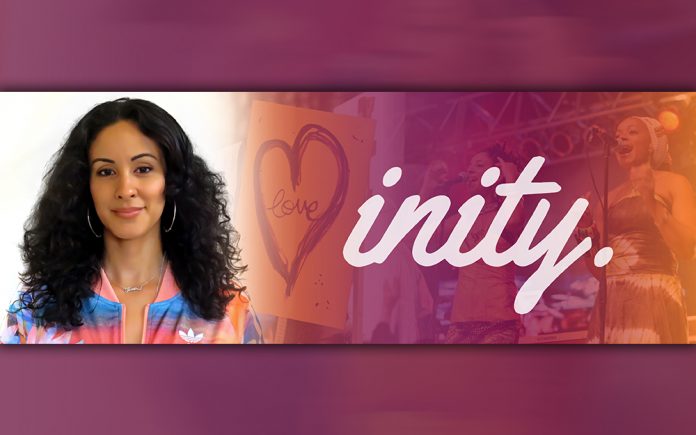 To know Christy Jeziorski is to love her. With a Master’s degree in International Studies and a focus on human rights and economic development, the Palm Springs native has traveled the world seeking her truth through a passion for music and humanity. She has worked with artists like Hawaiian Reggae vocalist Inna Vision and Hip Hop Soul artist The Reminders. Locally, she has connected with some of our finest creatives as well, like Giselle Woo & the Night Owls, Ocho Ojos and The Flusters.

A social entrepreneur and creative strategist, she is dedicated to helping creatives use their talents for positive social change.

She founded Inity in 2011 as the blog Inity Weekly, which highlighted the link between Reggae and conscious culture. The blog eventually explored other genres, creative mediums, and led to opportunities for her to work in the music industry.

Since then, she has produced and promoted concerts, worked on festival production teams, collaborated with artists on various projects, and co-hosted the Reggae Movement Radio show on KZKO in Denver, CO. From the outside looking in, she was on fire, but eventually she was fed a serious reality check about “the business” and it wasn’t pretty. “When I got into the Reggae music scene it was a release from a failed business. I was working on international relations in the corporate sector”, she shared.

From her love of Reggae music she developed Inity. She eventually took a break from Inity and joined the Whole Foods Market’s marketing team while teaching digital marketing at Cal State Fullerton. Inity stayed in her heart and mind, but she knew the universe would decide when it was time for her to bring it back, and for good. In the meantime she reviewed her mistakes and victories, and began to rebuild Inity into what we see today.

Combining her professional chops and education in human rights and communications allows her and Inity’s crew of talented professionals, artists and entrepreneurs themselves, build a powerful presence for unrelenting clients who celebrate diversity and challenge the status quo.

Her most recent vlog on Instagram, Am I Too Old For This?, looks at those creatives who view themselves as older or have the fear of getting older and not being able to “keep up”. In her video she reviews some common insecurities that have come up when discussing age with others and the idea of staying in the game, including keeping pace with the digital world, burn out and being ‘old school’.

With Inity, Jeziorski helps develop artist and brand strategies for the digital age. Some of their services include marketing, experiential, brand and artist alignment, content production and consulting.

From marketing strategy to brand alignment, live shows to artist development, Inity connects the dots among trends, culture and data to help the artist engage an ever-evolving multicultural audience.

Coachella Valley Weekly spent some time with Jeziorski over a cup of Koffi in Palm Springs to discuss the collaborative Inity.

CVW: How did Inity begin?

Jeziroski: “When I was in Denver for two years and quiet in my studies I really started going around and checking out the music scene. One artist I listened to was Midnight, a Roots Reggae band from the Virgin Islands. I happened to see them perform at this venue for a non-profit organization called One-Drum. It was that concert and them raising money for children in Africa in music programs that showed me the charitable work possible and how solution based efforts can work, it was so me; using music to raise awareness. I always migrated towards Reggae music because it was conscious. I love African and Latin culture too. I told myself I wanted to do this more and cover these shows, so I started this blog. I started talking about how Reggae makes you feel and how it’s a unity thing. I started connecting with venue owners and writers.”

CVW: Is there a particular type of artist you like to work with?

Jeziorski: “I want to work with creatives. I want to work with passionate people, just like me. We don’t always have to see eye to eye. At the end of the day, It’s their vision, it’s their art. I’m just the person who works to make the connections and connect the dots. When you’re a creative you want to create, you don’t want to necessarily deal with the business side.

I like artists who are developed to a certain point, that’s who I like working with. You know they put in the work. They’re having a hard time just breaking through this one barrier. It’s hard to be an artist, manage yourself, and do social media. There are so many talented people out there and they’re held back by a number factors.”

CVW: In your determination, what’s the number one factor holding artists back?

Jeziorski: “I don’t have all the answers but number one, they have to want it, every single band member has to be willing to sacrifice. You’ve got to have a support system within your band and outside of your band, who are the ones who believe in you. I don’t even like the word sacrifice, my dad once said, ‘It’s exchanging one thing for another, it’s giving something up for something better.’ Also, one thing I can say about art in general is, the business side can discourage you.”

CVW: What advice can you give someone trying to promote their art?

Jeziorski: “You have to find a way to break through the noise. Sometimes it’s not just about the numbers and trends, it’s about being polite and courteous, being really passionate about what you’re doing and what you’re talking about.”

CVW: You have shared with me in the past that you were in a car accident right after your stepfather passed.

Jeziorski: “Yes, I decided to come home because my stepdad was in his 90’s. I would come back to the desert for his birthday and for Christmas. I got to spend that year with him and he passed away in September 2016. Less than three months after he passed I got into a car accident in La Quinta and suffered concussion-like symptoms. My conditioned worsened. I went to different doctors and received different diagnoses and treatment for almost two years. I definitely retreated. I didn’t know what I was going to do. I couldn’t exercise. It was a very tough time.”

CVW: How are you doing today?

Jeziorski: “I found good doctors at UC San Diego. I’m in pain almost every day. I get nerve blocks in my head. I was misdiagnosed for two months. I got treated for that and I couldn’t even hold my head up. I have so much to achieve. I have so much to do. I felt stuck in the desert. I got scared. But then I had to make a choice. You can either go this way or that way. Either you’re in denial or you know that this isn’t what it is, so I started researching. I’ve received acupuncture, massages, I meditate every morning, give thanks every day and reach out to my friends.”

CVW: In closing, what are some of your truisms?

Jeziorski: “I believe music is a powerful and most unifying thing. I love how music can expose people to things. For me, it’s not the power or position, it’s what being in that position gives you the power to do, the things you can make happen.”