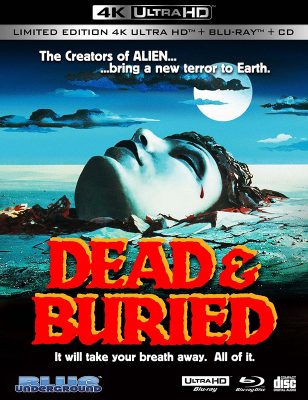 With only a few big screen venues fully open, and fewer movies being shown, the good news for movie buffs is the recently available titles from boutique distributors and the welcome upgrade of older titles to 4K.  So fine on larger, ultra hi-def home theater screens.

Something very strange is happening in the quiet coastal village of Potters Bluff, where tourists and transients are warmly welcomed… Then brutally murdered!  But even more shocking is when these slain strangers suddenly reappear as normal, friendly citizens around town.  Now the local sheriff (James Farentino) and an eccentric mortician (Jack Albertson) must uncover the horrific secret of a community where some terrifying traditions are alive and well…  And none is ever really DEAD & BURIED! 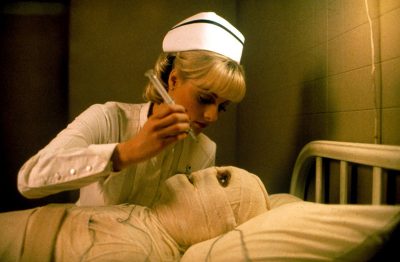 In honor of its 40th anniversary, Blue Underground presents this eye-popping new restoration approved by Directory of Photography Stephen Poster ASC (DONNIE DARKO), scanned in 4K 16-bit from its 35mm inter positive with Dolby Vision HDR and Dolby Atmos audio and packed with a bounty of new and archival extras. Including multiple commentaries and behind the scenes featurettes.  Blue Undergound. 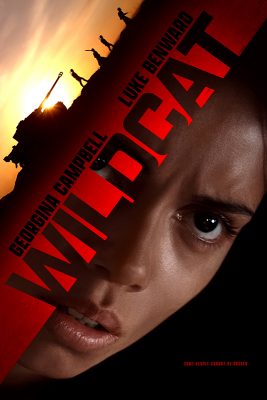 An ambitious reporter (Georgina Campbell) stationed in the Middle East is taken captive after a militant group ambushes her convoy.  Convinced that the young woman is hiding her true identity, they will stop at nothing to extract crucial information regarding the success of their impending terrorist attack.  With time fast running out, she must find a way to survive and turn the tables on her assailants in nerve-wracking battle of wits.

Georgina Campbell, won gives a gripping performance in this provocative thriller that asks the value of torture in order to gain information.  Saban/Paramount.  DVD.