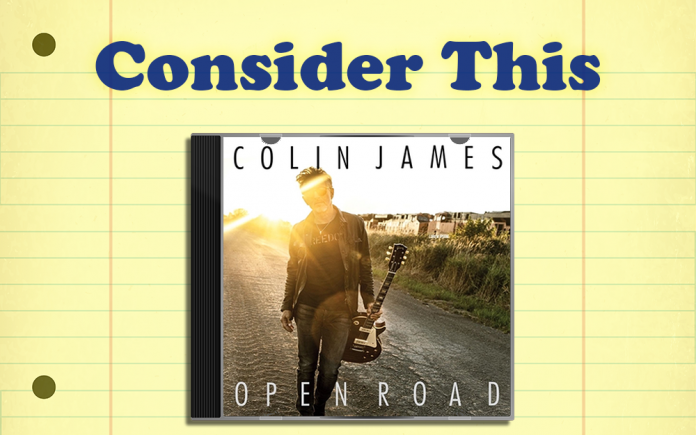 Back in the ‘80s, a trio of Young Gun guitar-slingers emerged and rocked the Blues world on it’s heels. Robert Cray, Stevie Ray Vaughan and Colin James managed to revitalize the homegrown sound, achieving both critical and commercial success. The genre had always maintained a presence, especially during the ‘60s and ‘70s when British Invasion stalwarts like The Rolling Stones and The Animals sang the praises of Elmore James and John Lee Hooker, effectively reintroducing their seminal sounds to young Americans. But by the ‘80s, it was relegated to the margins. These three offered a new twist on a seminal American sound that was embraced by Gen X’ers, weaned on Dinosaur Rock. Robert and Stevie Ray did the heavy lifting early on, taking parallel paths to create an irresistible synthesis of Blues, Soul and Rock & Roll. Colin (ne’ Colin James Munn) a native of Regina, Saskatchewan, famously got his big break in 1984, when he was tapped to open for Stevie Ray after his original opening act cancelled. The Lonestar guitarist was so impressed, he asked Colin to stay on as opener for the remainder of the ‘tour. Record labels took notice, and he inked a deal with Virgin Records.

His self-titled debut arrived in 1988 and it quickly climbed to the top of the Canadian charts. He won a Juno (the Canadian equivalent of a Grammy Award), for Most Promising Artist. Soon enough, he was back out on the road, opening for Keith Richards, on the Stones’ guitarist’s first solo tour. That raised his profile in the States. Pretty soon, heavy-hitters like Bonnie Raitt, Mavis Staples, Waddy Wachtel and Lenny Kravitz were lining up to guest on Colin’s subsequent records.

By the early ‘90s (well before Brian Setzer and Big Bad Voodoo, Cherry Poppin’ Zoot Cats, whatever) he pioneered the Neo Swing sound with his Little Big Band. Later albums explored Delta Blues, Gypsy Jazz and acoustic music. In the nearly 35 years since he released his debut, Colin has consistently topped the charts in Canada and maintained a loyal fanbase throughout the lower 48. The prolific Blues Rocker has recorded 15 studio albums, a Christmas collection, a live set, and a couple of hits compilations. Nominated for 17 Juno awards, he’s won seven.

This album is dotted with Blues deep cuts, but Colin has found ways to recalibrate and retrofit these songs, making them his own. First up is the syncopated swing of Albert King’s “Can’t You See What You’re Doing To Me,” which is powered prickly lead guitar licks, pugnacious rhythm guitar, prowling bass lines, a swaying brass section, churchy keys and a roiling shuffle beat. Colin’s guitar acts as a squally Greek chorus, punctuating a laundry list of grievances; “Well, I work two jobs, bring home all of my pay, if you tell me that you love me, then try to do some things my way, Baby, can’t you see what you’re doing to me, well, you say that you wanna leave me, you’re going back to your old time, used to be.” On the break, saxophones, both tenor and baritone, and idling organ fills lock into a call-and-response with guitars that sting and scorch. The result is incendiary.

Colin takes Magic Sam’s back porch ramble, “That’s Why I’m Crying” and transforms into a soulful lament that echoes Al Green during his Hi Records tenure. Low and slow, flick-of-the-wrist guitar licks connect with fluid bass lines, fluttery organ and a beat that lands with a satisfying thunk. Skittery guitars color the margins of the melody as Colin slowly reveals his tale of woe; “I went to some of the places where we used to go, your friends all told me you ‘don’t come here no more,’ look over yonder, what do I see? You and him laughing, now my heart’s in misery.” Twitchy guitars dart through the instrumental break, peckish and petulant one minute, solicitous and supplicant the next.

Colin’s take on Otis Rush’s “It Takes Time,” becomes raucous barn burner. Low-slung guitars lock into a hypnotic refrain cresting over honking saxophone, scratchy Blues harp, slithery bass and a chunky, West Coast Swing rhythm. Reproachful lyrics take an unfaithful love to task; “You live for today, leave tomorrow on it’s own, we got a little child and we try to make a home, but oh yeah, I know what it means to be alone, today you’re laughing pretty baby, tomorrow you could be crying.” Colin executes a spiky guitar solo that partners with roughhewn harmonica runs and stentorian saxophones.

Finally, he gets down and dirty, low and slow, slinking through John Lee Hooker’s “Bad Boy.” serrated electric guitar riffs butt up against scabrous slide guitar, ramshackle bass and a bellicose beat. Colin’s croon is equal parts repentant and defiant as he confesses; “I used to be a bad boy, now I don’t have to be bad no more, I learned my lesson a long time ago.”

Four of Colin’s originals dart through the sonic soundscape. “There’s A Fire” finds molten magma guitars singeing a slow-cooked arrangement, bookended by shivery organ, sturdy bass and a rock-steady beat. Bare-bones lyrics offer a bit of a cri de Coeur, that yearn for “a new way to be free.” Mostly, the music does the talking, by the break, a swashbuckling solo squalls and skronks before powering down to showcase some fleet and filigreed fretwork.

Conversely, “Raging River” is more expansive and contemplative. Burnished guitars wash over shimmery keys, spatial bass lines and brushed percussion. The pensive melody and moodily elegant lyrics echo the Bob Seger classic, “Turn The Page.” There’s an ache in Colin’s voice as he yearns for elusive love; “I stood on the edge of a raging river, saw your reflection staring back at me. I reached out and tried to touch you, raging river rolled out to sea.”

Meanwhile, the title track is menacing and muscular. Bottleneck riffs collide with barbed bass lines, thorny keys and a brawny backbeat. Lyrics offer a mordant meditation on the passage of time; “Time rolls like a wheel, over things I knew, but forgot to feel, and as I walk, the light reveals some scars are never gonna heal.” Wah-wah guitar bleeds into bottleneck riffs and slippery organ colors on the break.

Colin has his way with a couple of Bob Dylan favorites, adding some bluster and strut to “It Takes A Lot To Laugh, It Takes A Train To Cry.” He manages to split the difference between expansive Americana and flickering New Wave for “Down On The Bottom.” He really puts some stank on Stevie Ray Vaughan’s “Change It.” Guttural guitars scratch and scuffle atop wily bass lines and a Western Swing rhythm. A rangy carpe diem, the opening couplet gets down to business; “You can’t change it, you can’t rearrange it, time is all we’ve got, so baby let’s take it.” The guitar solo on the break deftly stacks Texas twang and Saskatchewan swagger, quietly paying homage to a friendship tragically cut short by Stevie Ray’s untimely death in 1990.

The album closes on a soulful note with a faithful reading of Otis Redding’s “I Love You More Than Words Can Say.” Plangent guitars wrap around beatific organ, righteous piano, elastic bass lines and snapback beat. Colin doesn’t so much sing, as testify. His keening vocals speak to an ache that won’t subside; “Honey, living without you is so painful, I was tempted to call, call it a day, you got me in your hand, so why can’t you understand, well, I love you more than words can say.” A sanctified organ solo lattices willowy guitars and plaintive piano on the break. It’s a soaring tour de force.

Open Road manages to put a new spin on beloved Blues classics and cannily salts the mix with sharp originals. Not surprisingly, it recently received a nomination for Best Blues Rock Album from The Blues Foundation. Robert and Stevie Ray ignited the fire, and Colin James continues to carry the torch. (Colin James Band plays Saturday January 28, 2023 at 8pm at BIG ROCK PUB 79940 Westward Ho Drive, Indio All proceeds from this show go to the Desert Cancer Foundation Tickets $25-$40. https://www.eventbrite.com/e/an-evening-with-colin-james-tickets-426538487097)