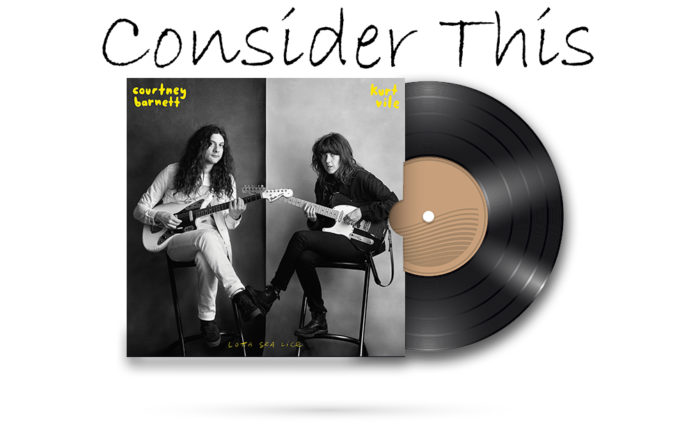 Back it 2014, it felt as though music publications couldn’t get enough of distaff artists like Haim, Lana Del Rey and Lorde. But the real discovery that year was Courtney Barnett. The 26 year old Australian native broke through in America with her long-player debut, The Double EP: A Sea Of Split Peas.

Born in Sydney, Australia, in 1987, she grew up in an artistic household, (mom had been a ballet teacher and dad worked as a screen printer). Courtney and her brother were exposed to Classical music and Jazz, but they were both obsessed with Pop culture. She began playing guitar at age 10 and cycled through a series of bands in her teen years. Following a brief stint at Art College in Tasmania, she decided to pursue music as a career. To make ends meet she worked as a bartender in Melbourne.

By 2012 she recorded her first EP, I’ve Got A Friend Named Emily Ferris and released it through her own Milk! Records label. A few months later she followed up with another EP, How To Carve A Carrot Into A Rose. Her musical style split the difference between confessional singer-songwriter angst and Punk-tastic Garage Rock. Her caustic vocal delivery and wry observations earned comparisons to Bob Dylan, Lou Reed and Liz Phair.

The American cognoscenti caught on pretty quickly. She was invited to perform at the prestigious College Music Journal (CMJ) showcase in New York. In Los Angeles, KCRW, the a la mode public radio station that broke Beck, Coldplay and the Black Keys put her music in heavy rotation. One of her first champions was DJ/music supervisor/musician/renaissance man Gary Calamar.

In 2014, esteemed indie label Mom+Pop signed Courtney and released her EPs together in one album. The track “Avant Gardener,” (a droll retelling of an allergy attack that necessitated an ambulance ride), became a break-out hit. By the end of the summer she was headlining at Pappy & Harriet’s.

The following year, she released her first official full-length record, sometimes i sit and think and sometimes i just sit. Not only did it deliver on the promise of “Double EP…” but it was equal parts clever and introspective, incorporating myriad musical genres wrapped in memorable melodies.

Clearly a protean talent, she managed to sidestep the dreaded sophomore slump. That year she was nominated for a Grammy (Best New Artist), and won a broader audience playing Coachella in 2016. As she began woodshedding for a third album, she struggled a bit with writer’s block. It was a pleasant surprise to find out that singer-songwriter Kurt Vile had written a song expressly for her. She had opened for him in Melbourne a few years earlier and the pair became fast friends.

Born in 1980, Kurt was the third of 10 kids and grew up in Lansdowne, Pennsylvania. His Bluegrass-lovin’ father gave him a Banjo at age 14. Kurt played it as though it was a guitar. Inspired by “raw, real music” from Beck, Pavement, Neil Young, Smog, Tom Petty and John Fahey, he became particularly enamored with the musicians associated with the Drag City label. Hoping someday he would be added to a roster that included Royal Trux and Stereolab. He immediately began writing his own songs.

At age 17, he self-released his first cassette. To make ends meet, he worked as a forklift operator. He briefly moved to Boston, but returned to Pennsylvania in 2003. It was around then that he connected with pal Adam Granduciel in Philadelphia. The pair formed the band The War On Drugs in 2005. Although he was fully committed to his solo career, Kurt would remain with TWoD for three years. Serving as their opening act on tour.

His debut, Constant Hitmaker arrived in 2008, released through Gulcher Records. It acted as a kinda-sorta greatest hits gathering his early, homemade recordings together on one CD. A year later, a vinyl-only release entitled God Is Saying This To You… served as a clearing house for even more lo-fi music. He sort of flooded the market in 2009, releasing The Hunchback EP in April and his second full-length CD, Childish Prodigy, in September. The latter marked the beginning of his association with respected indie label Matador.

2010 saw the release of another EP, Square Shells, but his real breakthrough came the following year with his fourth official long-player, Smoke Ring For My Halo. It topped critics’ lists in magazines like Mojo and Uncut, and made waves with online tastemakers Pitchfork. It also hit #154 in Billboard’s Top 200.

Since then Kurt has slowed his roll considerably, long-players like Walkin’ On A Pretty Daze and b’lieve I’m Goin’ Down arrived in 2013 and 2015, respectively. There were also a few more EPs, So Outta Reach, It’s A Big World Out There (And I Am Scared), Jamaica Plain, and The Spotify Sessions.

Courtney first became familiar with Kurt when she bought a vinyl copy of his Smoke Ring… album. His songs totally resonated, at a time when she was unemployed and slightly depressed. Not long after she began dating Jen Cloher (the pair are now married). So the record also served as a soundtrack to their early days as a couple.

When Kurt and Courtney went into the studio to record that first song, their chemistry seemed so natural they decided to make an entire album together, mystically entitled Lotta Sea Lice. Their inaugural collaboration, “Over Everything” is the opening track.

The album’s nine tracks are pretty evenly split between each songwriter, plus a couple of surprising covers. Kurt’s contributions include “Continental Breakfast” and “Blue Cheese.” On “Continental…” sun-dappled acoustic filigrees envelope spiky electric licks. Kurt laconically drawls the first verse like a Keystone State-Lou Reed. Courtney is equally deadpan, returning his voluble volley. There’s a Jabberwocky charm to the stream-of-conscious lyrics like “I walk like a bruised ego along shorefront property un-owned to me, but I’m feeling inferior on the interior Don’t ya see/Guarded and sentimental (and after all it’s just a rental) like better luck performin’ telekinesis on a priestess.”

“Let It Go,” one of the two tracks written by Courtney is a shambolic shuffle powered by a martial cadence and some sparkly guitar. The verbose verses, which they trade in dovetail fashion, come directly from real email conversations they exchanged during their long distance writing process. The thematic gist seems to advocate a “don’t sweat the small stuff” philosophy and gets downright meta on the mechanics of songwriting; “What comes first, the chorus or the verse?” Ironically, there is no chorus until the end of the song.

“On Script,” her other contribution, weds crisp electric riffs to a kinetic rhythm that breaks in ¾ time. Non-sequitur lyrics feel murky and opaque, and oddly, Kurt is largely absent from this fractious track.

They each tackle a song from the other’s back catalogue. Kurt applies his gangly deadpan to “Outta The Woodwork,” which originally appeared on Courtney’s Double EP… debut. Anchored by a cowpoke beat, his grizzled guitar riffs lasso the see-saw melody. They duet sweetly on the chorus but the end result feels soporific.

Ironically, the most interesting track here is Courtney and Kurt’s version of Jen Cloher’s “Fear Is Like A Forrest.” The prickly guitar chords that open the tune share some musical DNA with Tom Petty’s “Mary Jane’s Last Dance” (R.I.P. TP!) But the guitars quickly downshift into darker riff-age that echo Neil Young’s scabrous backing band, Crazy Horse. Here their vocals intertwine over scraggly guitar and a tick-tock beat. Even the lyrics feel slightly more erudite; “Books waiting to be written, lovers waiting to be loved/Songs Here underneath my fingers waiting to be sung! Nothing will be written, not one lover will I love/No song will I be singing If it’s will I’m running on.”

The album closes with Courtney and Kurt’s version Belly’s Modern Rock classic, “Untogether.” While the original was shimmery and ethereal, C&K recast it as scruffy sing-a-long. It’s pleasant but non-essential, almost as though they’re mouthing the words without parsing their meaning.

Anyone hoping for a 21st century version of Lee Hazlewood and Nancy Sinatra, or a more cosmopolitan Gram Parsons and Emmylou Harris, or even an outlier Sonny & Cher are bound to be disappointed. Courtney and Kurt’s vocal blend is too similar to be distinctive. Meanwhile, her biting wit is completely absent. In its place is some clever wordplay that sort of leaves the listener wanting more.

It’s not unreasonable to expect two prodigious talents would raise each other up. Lotta Sea Lice doesn’t do that. Courtney and Kurt seem to be treading water. This record is the aural equivalent of a nice sorbet, cleansing the listener’s palette until the real meal is served.