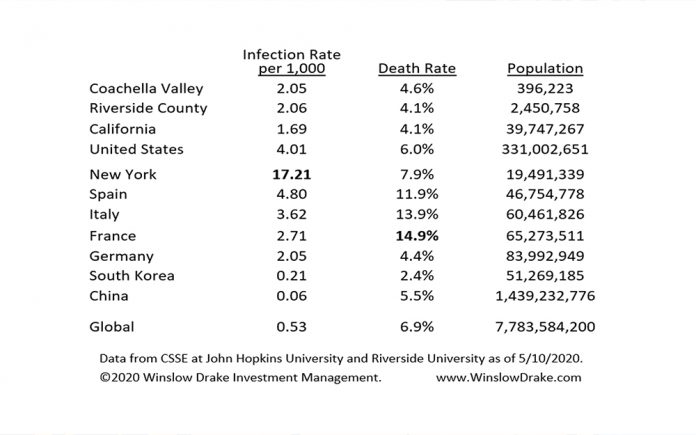 Despite wall-to-wall news coverage on COVID-19, it is hard to know how the Coachella Valley is doing relative to the rest of California, the United States or the rest of the world.

John Hopkins University hosts a COVID-19 Dashboard by the Center for Systems, Science and Engineering.  Using their real-time data through May 10, 2020 along with local data from Riverside University, we find that the United States has the most reported cases globally, yet we are also the largest population in the world amongst countries with reasonable reporting standards.  As a reminder, the largest countries in the world are China at 1.43 billion, India at 1.38 billion and the United States at 331 million.

Data shows us those countries closer to China who are accustomed to wearing face masks and dealing with novel viruses have fared better than other parts of the world.

Globally, the average death rate from COVID-19 is 6.9% amongst those infected.  Through May 10th, COVID-19 was marked as the cause of death in 6.6% of all deaths during 2020 globally.  These percentages are likely to be higher than the actual death rate as most people have not been tested.  As an example, if you thought you had food poisoning for a night, but it was actually COVID-19, it is unlikely that you were tested.  As the availability of tests has been limited around the world, the testing to date in most countries has been on those who were most ill or with access to healthcare.

So far, France has the highest death rate at 15% of all people diagnosed with the virus.  The United Kingdom is second at 14.5% followed by Italy at 14%, Spain at 12% and Mexico at 10%.  The United States is slightly better than average at 6% while Germany’s death rate is 4.5%, Japan 4% and South Korea an impressive 2.4%.  China has reported a mere 4,637 deaths from the virus amongst their 1.4 billion people.  Most do not believe Chinese numbers to be a full count of the cases and deaths that they have experienced.

Looking around the United States, the New York City metropolitan area became the epicenter of the pandemic.  With 1.7% of all New York State residents having been infected, 8% have died.  Where the United States has 40 cases per 10,000 citizens, New York has 170 per 10,000 or nearly 2 in 100.

After New York, New Jersey has the second highest infection rate at 1.55% of all residents of which 6.6% die.

Here in California, only 17 in every 10,000 people have been diagnosed with the virus – a 90% lower number than New York.  Of Californians infected, 4% die.  In Michigan where the governors’ residence was picketed by gun-wielding Michiganders, 47 in 10,000 have gotten sick while nearly one in ten die.

Texas has been a shining star during the pandemic like California.  With only 13 in 10,000 contracting the virus, fewer than 3% die.  On the other end of the pandemic, Massachusetts has been harder hit than any area outside of New York with 110 in 10,000 getting sick with a little more than 6% dying.

Looking at our county and region, both Riverside County and Coachella Valley have infection and death rates comparable with Germany.  In fact, if we exclude the New York metropolitan area from our COVID-19 calculations, infection and death rates across the rest of the United States are also in line with Germany.  Considering the size of our country and the political divide that makes everything more challenging to implement, we appear to be doing a good job across most of the country with special recognition to the good work done in Texas and California.

Haddon Libby is the Founder and Managing Director of Winslow Drake Investment Management, a fiduciary-only investment manager.  For more information on their award-winning services, please contact Haddon directly at hlibby@WinslowDrake.com or www.WinslowDrake.com.