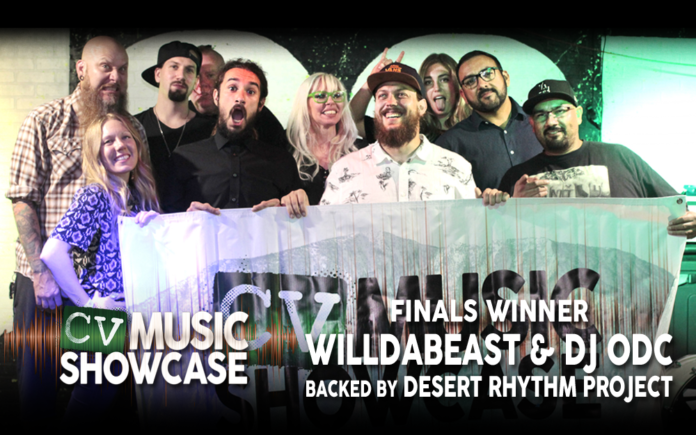 The time has finally come! Twenty musical acts…Five rounds of competition and elimination at The Hood Bar and Pizza and a winner has finally been crowned! After months of work and emotional build up, the victory goes to the extraordinary hip hop artist Willdabeast and the audibly talented DJ ODC! Over the past five months, acts ranging from full bands, to solo vocalists, to rappers and more have gone above and beyond what audiences and judges expected both musically and artistically and left their hearts on the stage for all to behold. They put themselves out there for many reasons, including valuable prize packages…the Grand Prize being $2000.00 provided by Brad Guth (owner of The Hood Bar & Pizza), and Julie Montante (owner of PSA Organica), plus a photoshoot by Laura Hunt Little and a one track recording by Arthur Seay at his Bitter Sands Studios.

The panel of judges varied from month to month throughout the competition. The panel for the finals included: Arthur Seay- Musician (HOBP, UNIDA, Death in Pretty Wrapping), guitar tech, recording engineer, producer, recipient of the 2017 CVMA for Best Metal Band; Chelsea Sugarbritches- Frontwoman for Long Duk Dong and 5th Town and recipient of multiple CVMA awards and nominations; Christian Sesma- Writer, Director, Producer of movies like The Vigilante Diaries; Whitney Hay sound person at The Troubadour, assistant tour manager for the group Above & Beyond; Todd “TK” Killiam – Program Director for 93.7 KCLB and champion supporter for the local music scene.

I am going to warn you all that this article is going to get pretty cliche from time to time and that is frankly, unavoidable. I have watched this competition over the past few years and the undeniable quality of the music performed, regardless of genre, has steadily and continuously risen to a degree that commands recognition and praise. To be perfectly honest, I am beaming with pride. I have said it before and I will say it again… The Coachella Valley is home to one of the coolest little music scenes in existence and this competition was just a taste of the quality and diversity of music that our beloved desert has to offer.

Although they technically did not win their round of competition via points (producers noted there were only a couple of points separating them from the winners), Kill The Radio so impressed the powers that be that they were the one and only competitors brought in to the finals via, “Wild Card.” This youthful, high energy trio hails from the VERY low-desert town of Mecca and describes themselves on social media as, “…experimental metal/whatever the f*** we want to play,” and I think that is a fair description. They are a predominantly instrumental band with dynamic interaction and chemistry between members, peppered with powerful vocals. In fact, judges noted that one thing they would like from KTR is to hear MORE of said vocals. That said, these guys are eclectic and take you on a surprising musical journey every performance. https://www.facebook.com/KillTheRadio760/

The first runners up in the finals who made this a truly, nail-biting round were the only out-of towners in the running. Hailing from San Diego, Manuel the Band has performed frequently in the valley in recent months, gaining a bit of a word of mouth reputation from locals who just happened to catch one of their sets. I had heard through the grapevine that they rock. That said, there was little that could have prepared me for their set. Without exaggeration they pretty much wowed everyone. As I sat next to my bro, Johnny Sugarbritches during the first couple of songs we bantered that they were so radio-friendly (in the best way possible), that it’s ridiculous that they aren’t already famous. As their set continued and became more surprisingly eclectic, Sugarbritches keenly noted, “That set was so sexy I’m pretty sure we all just got pregnant.” https://www.facebook.com/manueltheband/

Yikes. Here is one of those moments as a local musical journalist where it gets very difficult for me to stay bias because frankly, I love this band. Along with Kill the Radio, this is a trio that hails from the very low-desert via the Salton Sea area and in recent months, I have come to a theory that there must be something hovering in the air over there beyond the stench of massive fish die-offs that is breeding fantastic music. These guys consistently take their audiences on a journey full of funk, soul, and occasional psychedelic twists that cause them to, more than most bands… truly embody the sound and spirit of the, “desert/stoner rock” genre. And they do it all with a heavy peppering of humor from three of the nicest guys you could ever have the chance to know. Seriously…test my theory! Go to one of their shows and approach any of them afterwards and you will walk away saying, “Wow! Not only do those guys rock…They are some of the nicest guys I ever met!” https://www.facebook.com/Sleazy-Cortez-229667660407116/

This is a band that, when discussed amongst some of us more, ummm…”seasoned” members of the local music scene is discussed with a combination of admiration and jealousy; admiration because they truly kick ass and jealousy because of the fact that they are so young that only 2 of the 3 in the band are technically old enough to drink, yet they manifest a level of heart and soul in their sound that seems as though it comes from guys who have been at it for decades. Not to mention the fact that one of the members popped multiple strings on his instrument during the set and went on to perform his solos as if nothing happened. It’s hard to imagine the determination it takes to get that good at such a young age. It’s even harder to imagine how high the limits are for these talented young people.  https://www.facebook.com/TheCMFs/

The unofficial wildcards in the competition would definitely have to be ORMUS. The reason being is that, their first round of competition happened to be only the 3rd time they ever performed on a stage in front of an audience of any kind. They came into the competition as a bit of a fluke. Someone else had dropped out at the last minute and they decided to fill the spot thinking to themselves, “Well, it will be a good to get some needed experience and constructive criticism.” Little did they imagine that they would actually win their round. But what the judges saw was truly top-notch musicianship from every member of the band that was dynamic and synchronized. In addition, they had been searching for some months for a lead-singer without success and finally found what they were looking for with their newest member, Martin, who is aggressively charismatic and has no direction to go but up. https://www.facebook.com/ormusband/

The well-deserved winner of the 2018 CV Showcase is a truly gifted artist. It almost sounds cheesy to say that William Randal AKA Willdabeast, captivated the crowd and judges alike, but it would be no exaggeration. Willdabeast’s potent and sensuous tracks only amplify the fact that, not only is he a dope MC, but a truly gifted poet with substance. Willdabeast brings a modern and compelling take on an old-school ideal of hip-hop that is brought to true fruition with his accompaniment. A collaboration with high desert faves, Desert Rhythm Project, brought to life the combustible beats created by DJ ODC. This ultimately put the final nail in the competitive coffin and very few took issue with them as the winners. To quote my bro & peanut gallery officiant, Johnny Sugarbritches, “He came out there and commanded the crowd like a swat team.” https://www.youtube.com/channel/UCa27J6sznRH93i5eg70AxQA