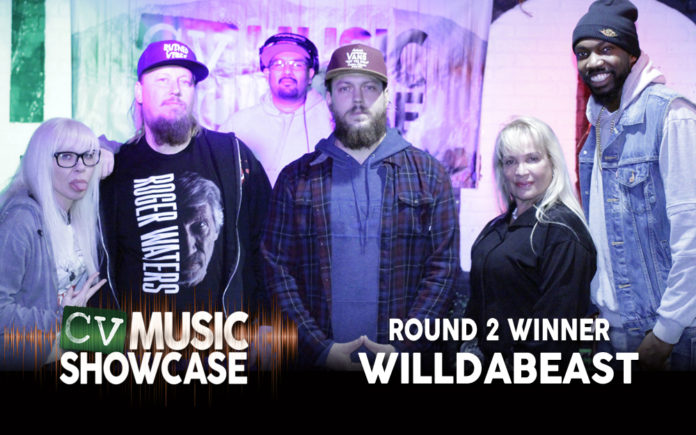 It was an amazing night of Hip Hop at The Hood this past Sunday. Three acts competed for $200.00 cash and the chance to move on to the CV Music Showcase Finals on Saturday, May 12 to compete for 2,000 cash and a one track recording from Producer Arthur Seay at his Bittersand Studios, and a photo shoot by Laura Hunt Little images.

The three acts battling for the win were: Her Hymns (Jetta King and Eddie Avina), Will “Willdabeast” Randall and Versastyle (Pete Cambell), with all three bringing their own unique hip hop flavor to the stage.

Her Hymns started the night strong with King offering up Evanescence-like vocals while Avina delivered rapid-fire raps with perfection. Only their third stage performance this power duo have a bright future.

Next up was Willdabeast who brought his old school 90s feel to his well-written lyrical style.

Last up was Versastyle, also bringing in an old school feel but wowing the audience with his freestyling at the end of his set where he asked at least 20 people to write down just one word on a piece of paper and then had his guy hold up the papers as he improvised some genius lyrics for every word. Very impressive!

The comradery between these 3 acts was as impressive as their performances as they were all so supportive of each other rooting each other on. Versastyle commented that two of his beats were produced by Willdabeast.

At the end of the night the judges scored Willdabeast as the winner. If you’ve never heard Will perform then I urge you to check out his #Wordplaywednesdays on Facebook. This guy has an ability to draw you in with his smart lyrics, melodic flow, and dynamic delivery.

The next CV Music Showcase takes place on Sunday, April 8 at 9:00pm at The Hood. Come out and support local music. The night’s sound provided by Nigel Dettelbach.  Video by Kurt Schawacker. Hosting by Phil Lacombe. Photos by Robert Chance. Judges were: Chelsea Sugarbritches, Julie Montante, Jason Hall and Samuel “Six Five” Sirmons. Grand prize of $2,000 cash for The Finals sponsored by Brad Guth owner of The Hood and Julie Montante owner of PSA Organica.